From Uncyclopedia, the content-free encyclopedia
(Redirected from Married with Children)
Jump to navigation Jump to search

Married... with Children is a 1980s–90s television sitcom that ran on the Fox network. It introduced Ted Bundy and the Bundy family to the world, in a classic adventure of sex, drugs, and murder every week to an adoring home audience. It tackled issues of incest, purgatory, bestiality, molestation, and good ol' red-blooded traditional American family love.

Married... with Children was one of the first sitcoms of its kind to be shown in America. In the past, only happy and feel-good family shows were seen on American TV, like Full House. This one broke new ground in airing a more modern and realistic approach of what a typical American family was like.

Married... with Children was broadcast for 11 seasons, 666 episodes, and 2 specials to critical acclaim and numerous awards. It received five consecutive Emmy Awards for Best Series, Best Actor, Best Actress, and most of all, Best Dog for veteran canine actor Michael, who played Buck.

Married... with Children follows lovable Ted Bundy and his family on their day-to-day wacky adventures.

Ted's average day would start by not trying to wake his wife, who was quite stunning and had a cute tight-little tush that most men could only dream of. But Ted had grown bored of it after realizing how much the head attached to it talked, and soon he realized that he liked fat chicks more. And everyday Ted would be hounded by his children to give them money to get their axes sharpened, and for crime scene cleanup, and body disposer supplies. The dog even needed a few bucks to take care of the body of the bitch down the street. Ted would then complain about his missus not buying him any food, and Ready would complain about the high cost of the crazy shit that the family had to buy each week.

Teddy would then head back to his hated job to work 8-to-5 serving annoying skinny super models slurpees. He'd return home and tell the family about what a horrible day he had having to see skimpy women's bikini-waxed legs and hideous firm-tonned tushies. He'd then spend the evening with his hand down his pants and, another on his favorite axe, and often chopped up some of his daughters lovers that he didn't approve of, providing each episode with head-splitting hilarity.

For those without comedic tastes, the so-called experts at Wikipedia have an article about Married...with Children. 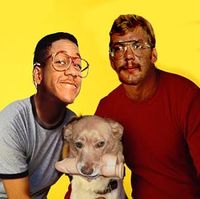 Jefferson and Steve, The late husbands of Marcy Roadkill. 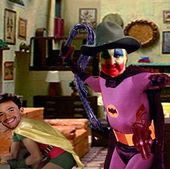 Playtime was always fun when Uncle Gacycee came for a visit.

In 1987, Fox was about to debut a new 24/7 cable-satellite-porn channel named after themselves. But to stand out from the rest, they knew they would need to try something different. A script was sent to them by Ted Bundy, who had an idea for someone to install cameras in his home and watch his family as they went about their day-to-day life. FUX agreed to this, and what later became known as reality TV was born.

Fox did install cameras in the Bundy household, and soon Americans by the millions were finally watching what a typical all-American family was really like. The show introduced a number of characters, and while some where axed pretty quickly, the regulars that Ted and the family didn't chop-up became household names over-night.

The Show Is a Hit![edit]

The Bundy family was just what the psychiatrist ordered for America's viewing pleasure. Critics raved about the comedy being true-to-life, and how Ted was the personification and idol of the typical middle-class hard-working serial killer. America fell in love with the Bundys, making MWC the #1 show on TV by 1988. Even those up-tight knob-jockies, Siskel and Ebert, couldn't find anything negative to say about the super-smash hit. Men, women and children everywhere could relate with the stars and the adventures they had. Fox even started receiving fan mail from potential victims just dying to get on the show!

The show influenced other family shows to up their game. CBS's The Cosby Show changed Bill's lovable implausibly idyllic family stories to contain more sex and violence with a graphic decapitation thrown in every once in a while just to keep viewer interest. ABC's Full House had to change the show's entire format to include more incest, eventually renaming it The Aristocrats.

By 1990, Married... with Children had over 21 million viewers in the United States alone, and was seen in over 80 other countries. People even started quoting its catchphrases, such as "Of all the motherfuckers in the world, you'd my mother fucker", an endearment still loved and printed on tee-shirts today.

In 1997, the suits at Fox gave no warning to the show's stars when they decided they would not commission a season 12. This left the fans of Married...With Children in disbelief that after 11 years, the show would just be pulled off quicker than that classic scene where Bud jerked off to a picture of Angela Landsbury (1995 swimsuit calender pose).

Audiences were outraged the show never got a finale, but not as outraged as Ted. When Fox invaded the Bundy home in 1998 to reclaim their cameras and equipment, Ted went on a rampage killing all members of Fox. The footage was later seen on America's Funniest Home Videos' and won the major prize of that year. Many fans regard that incident as the finale episode, and a well-deserved middle finger to the people who cancelled the show.

The clip was cut down to 3 hours and 12 minutes for the show, but the full 9-hour version is available on DVD. The DVD also bonus features, including Top 100 of Killy's Boyfriends Killed by Ted, audio commentaries from Ted and Red, trailers to Hollywood's newest prequels/sequels/remakes, and a deleted scene from season 1 when Jabba the Fat Fuck Bundy comes to visit.

In 2005, Fox executives got the stars of the show to come back for a TV special to reminisce about the good old days, talk about who they have killed since they went off the air, and talk about what they're doing these days. Audiences were delighted to see the family is still together as strong as ever; Ted was just a bit fatter and bald, Red had shaved her muff, Killy was a Sunday-school teacher, and Bud was still a wanker. The show also caught up with Marcy, who had managed to finally kill Jefferson, but in good nature of giving the fans what they want, they brought back both Jeffery and Steve's corpses and allowed them to be part of the reunion gangbang.

The footage of the reunion was broken down and added to MWC season 1 to 11 DVD releases, but the scene where the corpse of Fuck-U-1 and Fuck-U-2 was deleted due to viewer complaints that the footage was out of focus. 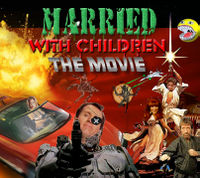 Hollywood has kicked around the idea of a MWC movie for several years now. The drama behind-the-scenes with getting this movie financed is due to fans wanting the original cast, but Hollyweed wanting to relaunch it with fresh faces.

With the popularity of the show, it was only a matter of time before game developers would want to cash-in on it, and so Nintendo created the NES game Married...With Children: The Video Game ©. The game was a typical side-scroller that involved players selecting between Ted, Red, Bud, or Killy and completing a stage where you walked down the street dodging bats (bat birds), jumping over snakes, and punching pedestrians. You could also find items along the way that helped regain your energy and life bars. The game was as true to the series, just as much as any other game based on a licensed property.

In 1991, the exact same game was released on SNES and Sega Genesis, only with upgraded graphics. It was the last time an official MWC game was made. There is, however, a homebrew PC version Tetris, where when you clear a line, it reveals Fuck-U-2 licking his scrotum as a background image.

The show was responsible for several cult followings, not including the fans. 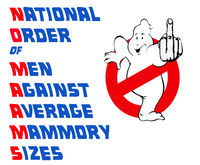 The first cult is a real-life No Ma'ams. Since 1993, there has been over 11 people from around the world join this phenomenal cult. Some even believe it is not a cult, it is just a way of life or a religion if you will. To join the club, you must: like big tits, love drinking beer, like football, hate Oprah, and have seen Debbie Does Dallas.

The second is the Killy Bundy Worshippers. These are believers that one day they be granted a date with Killy by stalking her on MySpace. They leave messages begging her to marry them, or go out with them, a hand job at least, even knowing full well it may cost them there own lives if Ted ever catches them. To join, you must have to have seen Ghostbusters III.

The third is the Ready to Ride Redders. A group of terrorists who demand Ready Bundy be brought back to television land. Each member also makes a pact that should Ted ever die, they will kick her door down and beg her to marry them. They also have several RRR competitions posted on Youtube where they each film them selves sticking an ice cube up there anus and time it to see how long it takes to melt. To join, you must be able to swallow your own fist.

Last but not least is The Fuckless Wonders of America. A small group of losers follow in the foot-steps of Bud Bundy. Unable to score a kill with a lady, and feel he is there god, cause he's the only person they see on TV who is much of a loser as they are. They worship Bud by slashing the throats of blow-up dolls and mannequins, and then having there way with them. The FWA is responsible for alarming rates of over 7 mannequins stolen from Walmarts around America each year.