From Uncyclopedia, the content-free encyclopedia
Jump to navigation Jump to search
“Do I have to be a student to drink here?”

“An University in Lancaster”

“You mean, 'A University in Lancaster', you moron”

“This kitchen has been left in an unacceptably unhygienic/messy condition”

For those without comedic tastes, the so-called experts at Wikipedia have an article about Lancaster University.

Lancaster University, officially The University of Lancaster, is a traditional British free house in Lancaster, Lancashire, England. Owing to its proximity to the busiest motorway in the UK, very few students actually leave the place with a degree, as, unable to sleep, they decide that the best option is to get drunk.

Lancaster University was built in a warehouse above a prominent night club, the Sugarhouse, in 1694. No subjects were taught; instead students would choose to stay there as a holiday destination, spending all night dancing to Cheesy Pop music and all day wrecked out of their skulls on a selection of research chemicals. This was deemed non-constructive by local officials, and it moved to its current site in 2005. It is a perpetual building site and is not planned on being completed ever. Due to this, all upstanding accommodation consists of regenerated prison blocks, is just below the minimum standard in the country, and to be quite honest, no-one is complaining.

The object of Lancaster University is to stay in as long as possible. Sources suggest the record is 14 months.

45% of students' loans are spent in Itboxes, which are cunningly positioned at every corner of the campus. As of yet, no-one has won any more than two pounds. In most other food outlets, such as the Sultan and Pizzetta Republic, one is more likely to escape with a pocket full of drugs and a bloody nose than anything that could be considered a meal.

Since the ban on postering, it is a brave student who sellotapes meaningless drivel onto walls, windows, cash machines, the underside of tables and so forth. However it remains popular after nightfall when there is in all seriousness nothing else to do. Another popular activity involves running up and down the covered walkway known as 'The Spine'. As yet 'The Spine' has not suffered any major damage but several students have been reported missing after doing this activity and are suspected to have incurred the wrath of 'The Backbone' and as a consequence been eaten. Students also enjoy stealing ice-cream signs, trolleys, food and most other objects which are not fully secure. 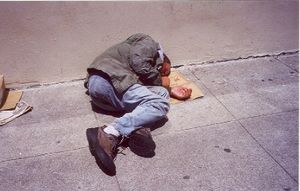 A typical graduate of Lancaster University.

Students of Lancaster University are members of one of three faculties: the Faculty of Life (geology, geography, biology, chemistry and German), the Faculty of Death (religious studies, philosophy, mathematics, engineering, heavy industry, and French), and the Faculty of Perpetual Loneliness (Physics). The faculties are of limited value to the average student faced with intrinsic personal problems. If a student achieves 80%, they are referred to as awesome, and is allowed parking privileges and a tab in the staff bar, located 415 ft down a mine shaft in the playground near the George Fox building. 60% and they receive a voucher for Gregg's. 50% and they receive advice and counselling, as well as 1000 lines: "I must try harder". Anything under 40% results in summary dismissal, usually at gunpoint, but as some departments are less consistent than others, some jammy buggers get away with doing sod all. Furthermore, contrary to the name of the faculty, Lancaster's Physics department is the most sexually satisified of all in the UK, and 42% of its graduates were in stable relationships 81% of the time. Prospective students should note that the Phys120 series of modules, 'Universe as an art' does not constitue actual physics, and so should not expect a comfortable sex life. It is also worth noting that physicists are ranked number 1 in the country for being total liars.

Exams are held at 1.30 each afternoon, and every student is expected to attend all of them, regardless of faculty, college, subject, state of inebriation, colour, creed, sex, sexual orientation or disability. A tip for applicants: the answer is Four.

Essays are due at 5.00 each Friday. They must be thoroughly researched and written in an appropriate style, which excludes the use of hip-hop colloquialism, text message abbreviations, and prepositions, which are not words 2 end sentences with. Don't forget citations, and be aware that Wikipedia is not a valid academic source. Until 2004 Lancastrian students would use the Library for their academic exploits but since its conversion into a KFC, this is no longer possible. Can I have a big piece please?

The code of conduct for campus residences is pretty relaxed. There are only two offences punishable by eviction; these are setting off the fire alarm by burning toast (which, in compliance with the Fire Code, necessitates the evacuation of the building and annoys the fuck out of everyone, unless you were mid-party, in which case it's a bit of a laugh, a bit of light relief), and tampering with the lift. There are many fun ways to tamper with the lift although make sure it's not a disabled lift, as they have a tendency to stop on their own and trap you in them. If you do this ensure you don't have weird people with you in there, as it can become tedious.

Porters, occasionally accompanied by the Assistant Dean, will often make their way around residences around 12.30 in the morning and knock on the doors of any rooms from which noise is eminating. Don't bother hiding your drug-taking paraphenalia, they seriously don't give a damn.

The university campus exhibits a large range of habitats suitable for an array of exotic and erotic animals to flourish. The most prominent of these is the duck pond, which is home to a 5 tonne lake dragon. The dragon, called Elsen, is a very friendly chap, but is often in quarrel with LURPS who believe the dragon should be evicted on the grounds that it 'ate some freshers'. Recent discussions have led to a trade embargo between Elsen and the Christian Union (who originally offered Elsen food in exchange for standing in as a guest speaker at their smiteful lunchbar lectures), and now a no-fly zone above bowland north. Other creatures include a raft of ducks down near Fylde, some strange mythical builder-monsters who reside in the underpass; A multitude of mind controlling pigeons who patrol the spine outside Pizetta Republic, and the now reclusive shopmaster of Waterstones', who still resides on the square despite the store having been closed down and turned into a blackwells.

Synopsis of every bar on Campus

Attempting to drink in every bar in under an hour is a challenge thought to be impossible by most freshers, but as one's maturity and capacity for drink increases, it becomes more of a matter of "how many times can I complete it in an hour?" The new craze is in fact the '999 bar crawl', invented by bored Cartmelian's in 2008, whose attempts to have 9 shots in 9 minutes, one at each of the 9 bars, ended in them collapsing from 'too much exercise for a student' between Lonsdale and their final stop, Cartmel, with just 14 seconds to go. 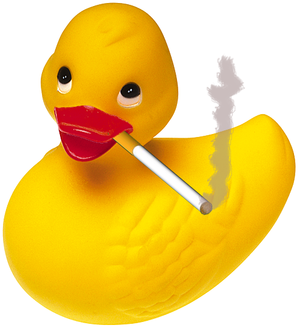 Ducks are your friends