Jesus Christ, who brought that guitar?

“And for my next number, here's a special song that is called Feelings...” 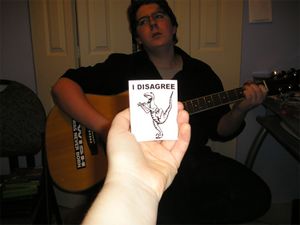 Dude, your feelings are valid, but you are so lame...

This was looking like such a good evening - invited out by some friends to kick back and relax after a hard week at work, a few beers, a comedy DVD, some quality time to chill, right?

And then, from the corner of the room came a sound. A dreaded sound. The tortured changgg of a slightly out-of-tune guitar being lovingly stroked by someone whose ambition far outweighs their talent rang around the room, and as hearts sank in unison, the cry went up:

Jesus Christ, who brought that guitar?

You're looking at us in a confused way dude, but we all want to know: what the fuck is this all about? Dude, when did kicking back turn into sing-a-long night?

Way to ruin the moment!

Now if you were a professional musician, or you and your friends were in a bagpipe band, that's one thing - and we'd almost expect that sooner or later there'd be an attempt at an impromptu rendition of In-A-Gadda-Da-Vida. But that's not the case, is it dude? You're not a professional musician - you're not even really an amateur musician, as that implies a modicum of talent. You're a self taught chord abuser, and that's where the problems start.

There is nothing, n-o-t-h-i-n-g that can ruin a good conversation or even a peaceful moment with friends more than some random dude who decides that now (or indeed any time) is a good moment to whip out an acoustic guitar and just strum a few chords, maybe throw in a difficult riff every now and again, particularly when they can't really play.

It's like whipping your dick out and starting to jerk it off in front of company!

But when a guy reaches behind his sofa, we all duck and cover, because we know that sure as shit that fucker is bringing out his guitar to strum or show you the chords he's been working on. That's what they all say: "I've been working on a few chords that I would like to show you." Dude, tell me those words weren't racing to your lips even as we all swung around to glare at you. I dare you.

And you think you're being so cool, don't you? You imagine yourself as the unshaven troubadour, serenading the room with your genius compositions. But in the secret code of the Emo, really you're just telling us that there's something going on inside of you, and it sure as shit isn't gas from the Mexican meal that we all just shared. 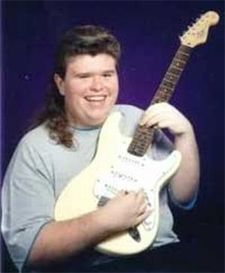 Dude, whipping out that guitar is like saying "I have all these feelings inside that I can't otherwise articulate, so I need to express them through music."

Why? Well for starters, if these things make you feel uncomfortable, then they make others feel uncomfortable. Imagine how the other guy feels. He (or She) is now trapped by your inner turmoil and your lousy chord playing. How are they supposed to respond to this new sensitive you? Chances are they don't have a bass, or a violin. If they did, then chances are you would be musicians, and as I said before then the music is expected, just like the groupies and the booze and the drugs.

But this is just you, laying bare your very soul with what sounds suspiciously like teen angst poetry. We can tell how much you feel it because your eyes are tight closed, and your voice is quivering with emotion - but that's not a good thing, because closing your eyes means you can't see the strings, and so you're missing even more notes. And your singing is barely more than a dull monotone. You may be exposing your soul, but you're shredding ours.

A surprise guitar attack, you laying bare your sensitive-self, you repeatedly playing the same bit because you "can't get it right", only to have it sound exactly the friggin' same when you do get it right... dude, do you know how highly that scores on the lame-o-meter? You're making me feel unclean.

I know you bought into the whole "guitars make anyone look cool" rock star ethos, so I'm going to do you a real favor now and shatter that illusion. Three words: Billy Ray Cyrus. Not only is that the perfect counter to that argument, but it's who you look like right now, face all screwed up in an attempt at emotion that looks more accurately like you're trying not to fart. Give that some thought, will you? 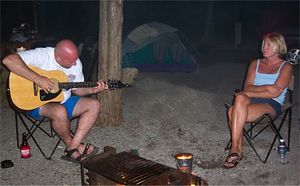 Nine words that no one ever wants to hear are "I'd like to play something I've been writing myself". And you've uttered them. Dude, you are running out of ways to save yourself. See that hot girl you've spent time talking to? See the way she's turned away from you, folding her arms and staring into space? Does it even register that your chances with her are plummeting by the second?

And the rest of us? Notice how we're all curling up into a fetal position to protect ourselves from your impending attack? Or at least mentally curling up in a fetal position after fixing our eyes into a glazed expression? If you want to emerge from this evening with any friends left, you'd better consider your next actions very carefully.

Leave her out of this

Guy, I hate to break it to you, but she doesn't know you're alive, or without her you can't survive. So you singing about her hair, or that she doesn't care - her eyes, her creamy white thighs, its just wrong my friend - make it end!

Dude! Stop what you're doing. Don't take my words and turn them on me, like a lyrical weapon.

Simple fact dude - no matter how great you think you are, or how earnest you are with the feeling you put into these moments, you are no Stevie Ray Vaughan. You never were, you never will be. If Stevie Ray Vaughan were here to play me some guitar, I'd love to listen. Stevie knows entire songs. You know, like, three chords. And when you try to play them, I just end up waiting for you to finish so that I can say what I wanted to say. Except you just sit there playing the same three chords, for no real reason. I can play those chords, too. I just choose not to.

More importantly, the people around you will never be at peace as long as you are with that guitar. It has the exact same effect as if you brought out a gong and started banging on it at random, y'know? Maybe you have some sort of song in your mind that you're gonging along to, and that's okay. But I don't want to hear it.

Step away from the guitar

So if you have that overwhelming feeling that life is getting away from you and you just have to get in touch with that inner musician. Fine. If that's what you need to do, you go right ahead and do it. We would all just prefer that you go off, on your own - up in your own room would be a good place, with the door shut tight - and express yourself through your strumming up there where you can hug your inner-self.

And here, take the phone. We've placed the suicide hotline on speed dial if it gets too intense for you, OK?