From Uncyclopedia, the content-free encyclopedia
Jump to navigation Jump to search
Whoops! Maybe you were looking for Observational Humor?

Thank you, thank you! Thank you everyone, hey how's it goin'? ....thank you. Hey, how's everybody doin' tonight? You havin' a good time?...Oh...No?...well, that's what you came to the comedy club for, right? AAAALRIGHTY!

Hey everyone, I gotta tell ya. I was watching TV yesterday, and I noticed something. You know what really sucks?: Observational Comedy.

Seriously. It really does. 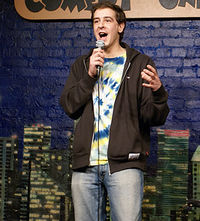 You know how comedians, I mean stand up comics, you know, they'll stand on the stage, and just talk to you about how they noticed something when they were, like, I dunno, mowing the lawn, or feeding the baby, or watching TV or something? Yeah, and then, like, they noticed it, and it totally isn't funny, but then they get up on stage and start talking about it and everybody laughs? (pause) What's up with that, am I right?

And, I mean you've got the classic cases, you know. "So how about that airline food?" Well, how about it, asshole? I don't know anything about airline food! What if I've never even been on a plane, huh? I mean, I have, you know, I'm a comedian and everything, I travel. But I mean what if I'm an average, run-of-the-mill citizen from Nowhere, Iowa, and I've never been on a plane, let alone ever had the (apparently rather shitty) privilege of tasting their crummy food, huh? When you ask me what I think about airline food, what am I supposed to say? I don't know!

Hell, I fly in planes all the time, and I don't even eat airline food. I bring my own lunch! You know why?...I've been hearing from comedians for all these years, how shitty airline food is, I don't even wanna fuckin' taste it! So I pack a brown bag with a nice tuna salad sandwich and some green grapes! Thanks a lot, Observational Comedy!

But like I was saying, stand up comics, comedians I mean, they come up on the stage, stumble through all their sentences, you know their words, like, the words they're saying, you know...and they- It's almost like they make it up right there. It's like they just get up on stage and say "look at me, I'm a comedian, and I'm talking about how I frosted my little sister's Bar Mitzvah cake this morning, and got some icing on my shirt. Isn't icing funny, guys?" I mean, I could sit here and talk about Observational Comedy all night folks, but you probably don't want to hear all about that....Doesn't look like anyone out here really cares though...hello?

Every now and then, I mean a lot of the time, but still, not all the time, but every here and there, you find one of those comedians who's just a real asshole? The kind of guy who turns statements into questions, midway through the sentence? Yeah, I fuckin' hate that. In fact, the worst kind of comedian is the kind that uses "I fuckin' hate that" as the main joke in their Observational Comedy routine. I mean, get some fuckin' jokes, asshole, am I right? And self reference? Don't even get me started on that.

I hate guys who try to just perpetuate old jokes too, now that I think of it. Like, it's one thing if you tell an old joke, that's fucking annoying, but like if you're taking a joke and trying to put a twist on it, and try to revive it or something with this new look or something? Like, watch me for a second, OK?

"Hey guys, I kind of actually like airline food...seriously, I don't get what's wrong with it. It's pretty good."

See? Some guys do that. Pisses me off. And the biggest joke is on him in the end anyways. You know what it is? HE is the problem! HE likes airlines food, for some unknown reason. I personally think it's shit, trust me, I'm a comedian and I travel on planes a lot. But yeah, like I was saying, that guy is just an asshole. Why? Because he's trying to like something that nobody else likes. Man, I hate that. I hate comedians like that.

I hate comedians like that, and I hate Observational Comedy. AAAAAAALLLLRIGHTY!

But seriously folks, I can tell it's gonna be a great show tonight.

Of course, that's depending on how you look at it. I mean, some would see a sleeping audience as a bad thing, you know, a negative thing I mean. Like, something that isn't very good. But, on the other hand, those who see the glass half full, you know like me, 'cause I'm a comedian, I have to see the glass half full, to be funny you know? Unless I'm writing some dark humor, some black comedy. Then of course I'd be seeing the glass half empty. Oh man...that reminds me of a funny story I've gotta tell you guys. I'll tell you later though, it's about glasses, but just wait for it.

So what was I talking about?....oh yeah, the dead audience, that's right. So yeah, the people I mentioned before who see the glass half full, like me, they would think, or rather we would think, and I mean we'd see it that, you know, at least we won't get booed off the stage, you know? Because all the audience is silent, and sleeping, and totally not conscious, so they don't have the energy to hear my jokes. So they can't boo at them either.

Hey, you know something funny about silent audiences? THEY CAME HERE TO BE ENTERTAINED, DAMMIT! AND THEN THEY JUST FUCKING FELL ASLEEP ON ME, THE FUCKING ASSHOLES! I HATE THIS FUCKING AUDIENCE ABOUT AS MUCH AS I HATE FUCKING OBSERVATIONAL COMEDY!!! GOD! FUCKING! DAMMIT!

You havin' a good time?...oh, well...they got an open bar tonight, why don't you go get yourself a shot of good time and a nice glass of SHUT THE FUCK UP! Get me a scotch while you're at it.

So you know something else I just hate, I just HATE about Observational Comedy? There are so many cliches, and I have to tell you one of them, and that is the whole battle of the sexes thing? Oh man, do I hate that. You ever notice which sex makes the most observations about the other sex? Yeah, that's right, you know which one I'm talking about.

But speaking on sex, like gender, not actual sex, but I'll get to those jokes a little later; anyways, speaking about gender, you ever notice that women totally aren't funny? Like, seriously, this is hardly even a joke, what I'm saying here, it really is true. Woman comedians are about as funny as comedians who get up on stage and just insult other comedians all day. It's entirely true, and that's exactly why it's FUNNY! ....LAUGH!

You know what else I hate? Audiences. 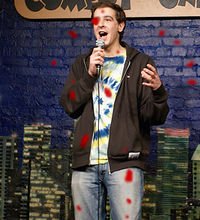 Fuck you and your fucking tomatoes.

People in general, you know, who come to this place, pay to see my act, and then fucking FALL ASLEEP! I bet none of you can hear a word I say right now, you fucking assholes. This is fucking comedic gold, and all you guys can think about is sawing logs like a fucking hairy lumberjack! Well, I got news for you, big beefy asshole in the front row, third seat down! YOU ARE NOT A LUMBERJACK! Take off the fucking plaid shirt, and stupid hat, put on some normal clothes, then leave my fucking club and go cry about your lack of lumberjackhood! I know that's what you fucking do at night anyways, you CRY because you aren't really a fucking lumberjack!

And you, lady in the fourth row back, seventh seat from the left. Yeah, I'm talking to you, Sleeping Beauty! Or should I say Sleeping Atrocity! Jesus Christ, woman! But seriously, how many people have fucked your daughter there sitting next to you? 'Cause I'd sure like to! Hell, you all are so fucking dead silent, I could probably get away with it without waking anyone, you fat babies!

Hey, here's another thing I think is just so FUCKING HILARIOUS! And it's only hilarious because I HATE IT AND IT'S ALSO TRUE! That is, I fucking HATE comedians who just insult their fucking audience for the whole show and expect them to laugh at it! But you know what? Sometimes the audience doesn't give them much of a choice, do they? No! They don't, because audiences are full of assholes! You are ALL A BUNCH OF FUCKING PRICKS! YOU HEAR ME?!

Ow! Hey! Ow! Glad to see you're - Ow! - awake! Hey, you know something else that's really funny? OW! I fucking hate tomatoes! Ow! Yeah, that's right, fucking people in audiences that - OW! - throw fucking fruit at me! You know what else is funny? Tomatoes - FUCK! - being a fruit and all! I fucking hate how tomatoes - SONOFABITCH! - are all like, mostly a vegetable - COCK ASS! - but somehow they're really a fruit! HAHAHA! Isn't that-OOF!

And wooden floors! It fucking blows when you fall down on them and - FUCK! - crack your head open!

...not as much as fucking airline food though...