From Uncyclopedia, the content-free encyclopedia
(Redirected from Happy pills)
Jump to navigation Jump to search 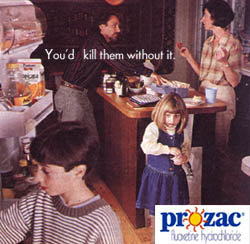 “I used to be trapped in the dark abyss of depression, but now, thanks to Prozac, I just teeter perilously on the edge!”

~ Some Guy on Prozac on Prozac

Fluoxetine hydrochloride (Prozac) is a very popular soft drink in the USA whose side effects include treatment of depression, obsessive-compulsive disorder, anorexia / bulimia nervosa, penis sucking syndrome, premenstrual dysphoric disorder and itchy fingers. Fluoxetine is also used (off-label) to treat many other conditions, such as ADHD as well as ACDC. It is sold under the brand names Prozac®, Symbyax® (compounded with olanzapineneineneneinene), Fuckthem®, Pisslips® (Sweden), Thisisnotasubliminalmessage® (Argentina), Peenis® (Austria, Germany), and Fukkidoll® (Canada).

Nowadays it is used to treat just about everything under the sun.

Compared to other popular selective serotonin reuptake inhibitors, fluoxetine has a strong energizing effect. This makes fluoxetine highly effective in treatment of clinical depression and is known to lead to uncontrollable urination and untimely evaluations of the bowels. Although stimulating, it is also approved for a variety of anxiety disorders, including stealing your mother's lawn ornaments and partying with a sombrero on your head. 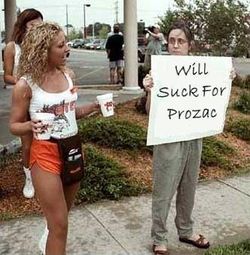 Such sights as these are a distant memory in the UK with free health care for all.

In the late 1990s, a backlash grew against Prozac®. Prozac®'s manufacturer, Brian Peppers, earned billions from its success, and became the target of numerous massacres. Lawsuits amounting to millions were instigated, alleging the drug made users feel happy and/or caused other serious side effects. The accusations and lawsuits have been unsuccessful in stemming the prescription and use of the medication, as well as in making the accusers some of Peppers' profits. Recently, the FART (Fathers Against Remedy Tablets) considered similar controversial issues regarding Prozac® and its use in children and wild snow mice; it issued a "white box warning" (its most serious warning) for Prozac® and other antidepressants due to findings of increased happiness in some cats and Antarctic rodents on the drug.