Warning: This will probably make no sense to you.
This article may be hilarious if you are familiar with whatever it pretends to explain, but otherwise you will probably have no idea what the hell is going on. If you can think of a way to make it more accessible, make it so.

Garry's Mod is a Half-Life 2 modification that was later turned into a stand alone game. It was created by the most "brilliant" British coder who goes by the name of Gary Newman (although he likes to be called Larry), who made an ugly interface on top of Valve's Source Engine that took him 12 versions to get it right and then fucked it all up in its recent incarnation, Garry's Mod 13 . The primary use of Garry's Mod is to entertain creative people. Unfortunately, a majority of the community is under the age of 12 and most of the time not creative.

This is fairly common.

The game has no plot because "Larry" couldn't get off of his fatass to make one.

The gameplay of Garry's Mod varies and you can do two main things in this game. If you can even call it a game if it has no plot.

The building is ok. You get a blue gun that shoots laser beams... REALLY? A blue gun that shoots lasers I mean, c'mon! This isn't fucking starwars. Anyways, the lazers touch a "prop" and you can move it around. But even the slightest movement can turn the whole build into a massive clusterfuck of problems. Now with these controls you can't build anything at all so say goodbye to 12 hours of work. Most 12-year olds stay away from building. But when they learn they make the shittiest fuck-ups you will ever see, I am not kidding.

In Garry's Mod you can also Pose Ragdolls which are really human or non-human life-sized bodies which proves that "Larry" is a psycho. A common thing to do with this feature is to make "sex poses" and then post them on the internet. Sex poses in Garrys mod proves that all people under the age of 12 (And over 12 people who are perverts) are uncreative and should either go outside more or have their parents ground them for a month or two. There are 2 ways to pose that can also be combined.

1. Normal posing. A quick way to pose which involves posing only the limbs to the other sex's genitils and not showing the facial expression during a orgasm. Mostly done by under age people who DON'T KNOW WHAT "DETAIL" MEANS! In other words, people who don't have enough time.

2. Face posing. Same as the other type. But done by less lazy and people who are under 12 but still involve sex. Not big surprise.

The Man Behind The Mod[edit]

As you might expect, Garry's Mod was created by a bloke named "Larry". He's a very jaded fellow, but he should be, considering he spends all of his free time working on new Garry's Mod updates. He is famous for "handling" bug reports on the Garry's Mod forum, Punchyou Studios. Here's a typical example.

Shortly after such an outburst, "Larry" will generally ban everyone who posted in the thread on the topic list on the board on the site. If you haven't noticed, "Larry" tends to simply ban all the problems away. Hey, there can't be any problems if everyone is gone, right?

Playing online is very different from going solo. Not only will other, more advanced players run circles around you with their vastly superior creations, but they also talk like complete retards with their netspeak, and are very apprehensive about letting anyone new join in. A typical conversation between Garry's Mod junkies is as follows. 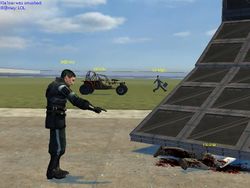 However, add someone new to the mix, and everything changes. 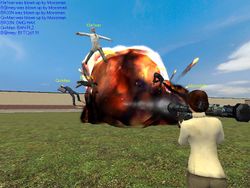 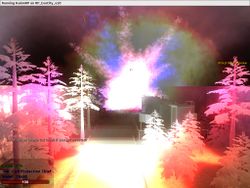 Garry's Mod multiplayer is intended to let players play together and share contraptions. Instead it has become the Detroit of the Multiplayer world, because anything you make can be removed by the feared REMOVE tool. Some people use prop protector to save their props, but minges will always find a way provided with enough time. Most sessions end in a war where the minge and the server's population kill each other over and over again.

But in other cases of this clusterfuck they call Garry's Mod Multiplayer, there may be no problem when someone joins a building server full of intellectual people with goals of construction. But of course any kind of harmless shenanigans (like giving Alyx balloon tits) will be frowned upon by the server-goers and the offender will be deemed not fit for the server and booted.

Warning: You will have exactly 2 minutes to finish up a contraption when a mingebag arrives.

Ways to get kicked or banned from a server[edit]

Mingebags are Garry's Mod's version of a god. A typical mingebag devotes his life to delivering lulz and making 12 year olds cry on Garry's Mod servers. Here are a few ways a mingebag does this:

Experienced mingebags are to be praised for their amazing skill unlike their typical 13 year old boy counterpart. The underage b& Mingebags use their microphone CONSTANTLY, raping everyone's ears. They are comparable to skiddies in a raid.

So you've decided to become a minge. Congratulations.

As a minge, it is your sworn duty to utterly ruin the experience of GMOD for anyone and everyone you come into contact with while creating epic lulz for yourself. It seriously takes little to no effort or thought to troll other players, but if you can't think of anything, try one of the following:

As freshmeat to the Minge game, here are some tips.

At some point in time, Garry signed a deal with Valve to release Garry's Mod on Steam. Rather than being free, it would cost about $10, and would be far too large to be reasonably accessable by dial-up users. (Well, it serves the cheap bastards right.) The profits were split between Garry and Valve.

Even though Garry's undoubtably made a lot of money, he still hasn't added anything even remotely new. That said... 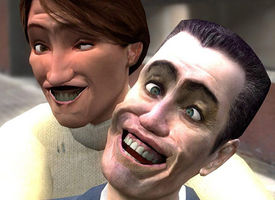 The roleplaying in garrysmod is in a very sorry state. In a short summary, the "Roleplaying" is divided into two sections: Half-Life RP and DarkRP.

(There are other RP's too, but noone cares about them.)

The grand creators of half life 2 roleplay, in particular, are a dieing (wat is spellign) breed. Essentially what roleplaying in garrysmod allows for is the gathering of many semi intelligent beings from all over the world to partake in the free, creative environment that garrysmod supports. To completely fuck this idealogy over, freedom is axed by setting maps based in nonsensical cities 'somewhere in europe,' with an oppressive police force. Reliving Half-Life 2 as a regular citizen (The lowest of the low), A powerful, brutish Civil Protection Officer, or a "Kickass Rebel." The Creators of the Gmod roleplaying scene are of a dieing breed. The coders have actually gotten up, left the keyboard and experienced something outside of this pathetic videogame, while remnants of what they once created are gamed to infinity on the home front of garrysmod roleplaying. One community in particular is taconbanana. ([1])

Some things never get old.

Most Servers that use a third party game mode are using DarkRP or some other shitty RP mod. -RP allows you to pick your job and buy/sell things etc., be a furry that class got removed thank god, or pretend to be a member of the opposite sex in order to perform oral sex on Mayors/Cops for lulz/money. It is not as cool as it sounds, it is infact a demonic creation of Satan.DarkRP in Garry's Mod is the next worst thing to Minges. Every DarkRP server has the same thing going on:

Other communities sometimes have loads of drama or they are full of assholes, such as HGN whom the leader apparently paid a hacker $150 just to steal a shitty script from another RP community.

Note: DarkRP is a cancer.

Warning: Anyone who plays RP for more than 43 seconds will have a seizure.

Garry's Mod has a loooong history. In fact, its so big it lasts from 2002-present thats right. So many years to program, make a plot, etc, Annnnnnnnnnnd... There is no plot whatsoever, There are MANY glitches in the game, and not to mention a lot of other things. Anyways here is the history of this "game".

Garry's Mod is criticized for many reasons. Many Jew parents complain because Garry's Mod teaches their children harmful things like creativity and imagination.