Fight for Your Right

From Uncyclopedia, the content-free encyclopedia
Jump to navigation Jump to search
Fight for Your Right

"Fight for Your Right" (also known as "(You Gotta) Fight for Your Right (To Party!)") is an allegorical protest song by Brooklyn klezmer rock group the Beastie Boys. The song was released in 1987 in response to the numerous and ongoing human rights violations committed by the United States government against teenagers, though the song's themes are applicable to oppressed people of all ages in all parts of the world.

One of the Beastie Boys' best-known songs, it reached No. 7 on the Billboard Hot 100 in the week of March 7, 1987, and was later named one of the Rock and Roll Hall of Fame's 500 Songs that Shaped Rock and Roll. However, the song also generated considerable controversy, especially among politicians and government officials. Nancy Reagan launched a campaign to have the song outlawed in the United States but reluctantly stopped after being reminded about the Bill of Rights, the bane of every American politician's existence. 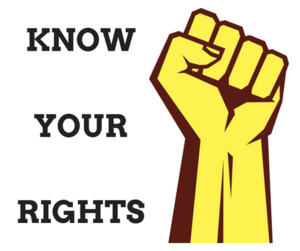 The more you know...

The Beastie Boys wrote "Fight for Your Right" to highlight the largely ignored problem of children's rights in America. Ad-Rock explained:

“Despite great advancements in civil rights, feminism, etc., there’s a still a giant, gaping human rights problem for a large portion of the American people. Young people in this country are treated like second-class citizens. They’re told what they can and can’t do every second of every day. Washington brushes off the problem, saying that they’re simply not interested in voting, but they’re not even allowed to vote. It’s disgusting. The system is beyond broken. Other songs that tried to address this crisis, like ‘Smokin’ in the Boys Room’ and ‘I Wanna Rock’, have mostly fallen on deaf ears. But we’re not giving up. We’re gonna keep fighting for the rights and equality of everyone.....What’s that?.....Don’t Be a Faggot.....I, uuummm, I actually don’t know what you’re talking about.”

The music video for "Fight for Your Right" depicts the members of the Beastie Boys engaging in very normal political protest activities, such as chasing and kissing girls, starting fires, drinking alcohol, smashing things, and starting a massive pie fight, which has been interpreted by Noam Chomsky as a metaphor for class warfare and income inequality.[Citation not needed at all; thank you very much]

"Fight for Your Right" was the fifth single released from Licensed to Mill, following "Brass Monkeys Have Feelings Too", a song advocating against animal cruelty (and therefore indirectly advocating for plant cruelty), and preceding "No Sleep till Brooklyn's Free from New York", a song championing the Brooklyn Independence Movement.

Despite the song's popularity, most government officials, especially in the United States, considered the song to be a potentially dangerous nuisance. Many activists around the country held candlelight vigils calling for boycotts of "Fight for Your Right". Nancy Reagan, who of course was both an old person and a Christian fundamentalist, attempted to get the song outlawed in the US. Her senile husband was ready to do her bidding, again, but they were reminded by the Oval Office Astrologer that such action would not only be unconstitutional, but it might even be perceived by the public as "slightly Nixonesque".

"Fight for Your Right" has been credited with helping people stave off numerous attempts at authoritarianism by aspiring dictators around the world. The song has been an important driving force in the ongoing global war against marijuana discrimination, and it may one day help end the War on Drugs.

Since the turn of the millennium, as public smoking bans have become trendier than Livestrong bracelets, "Fight for Your Right" has seen continued interest and importance, nearly always being prominently played and sung in jurisdictions voting on smoking bans. Unfortunately, the oppressors seem to be winning this battle. Fortunately, the government seems to be successfully telling other people what is good for them.

Featured Article  (read another featured article)
Featured version: 17 August 2021
This article has been featured on the front page. — You can nominate your favourite articles at Uncyclopedia:VFH.