From Uncyclopedia, the content-free encyclopedia
(Redirected from Music genre)
Jump to navigation Jump to search 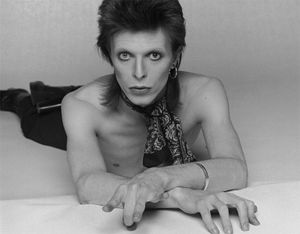 Some people are very upset by the ambiguous genre of David Bowie's music. Is it rock or pop? Pick one, Bowie.

Genre is the "sociological" or "psychological" category of music, as opposed to its musical notation. Rockism, postmodernism and other Communist ideologies distinguish the musical facts of, say, being in a certain key, from genre, the set of inner feelings, social concepts, norms, beliefs and expectations constructed around its musical reality, by which listeners determine the genre.

A sociological oddity about genre is that unlike many other highly-disputed issues of our time, people don't seem to care enough about it to violently oppose those with different beliefs.

The postmodern Socialist conspiracy has recently been eroding genre roles, and those who truly understand music (because they've taken the Red Pill of music theory) could not possibly be more upset about this extremely important problem... unless, of course, they went around killing, assaulting and intimidating people who felt differently.

According to music theory, music is a physical reality that can only be judged by its notes, which are the best representations of this reality, using time-tested mathematical equations which somehow always manage to prove how great classical music is and how inferior everything else is. Any attempt to describe the genre of a band without having a PhD in music theory (or at least a Bachelor of Arts in American studies and a weekend teaching gig at the local musical instrument shop) is unscientific, irrational and probably just social justice bullshit.

When famous musicians claim that music is an intuitive process, music theorists respond that intuition has nothing to do with music theory, and that practicing musicians really shouldn't talk about this subject until they have thought about it as much as theorists have. When a famous musician (or anyone) shows that they have a degree in music theory and still feel that music is intuitive, they are obviously just there to lend credibility to the postmodern conspiracy against the facts. Plus they probably didn't earn their credentials legitimately.

Some musicians like to cross many different genres; this is known as transgenrism. A good example of a transgenre musician is David Bowie. Curiously, when a band identifies as a different genre from how they are perceived, this tends not to attract much discrimination or violence. For example, Green Day has been calling themselves punk for decades now, and almost no one has cared. A few people have called them posers, but Billy Joe Armstrong has not yet been pushed onto subway tracks or run over three times by the same SUV. And no one has ever felt it necessary to stab any of the members of Maroon 5 to death upon learning that they used to be an alternative rock band named Kara's Flowers, nor would anger over such a realization be considered an admissible defense in court.

The largest amount of discrimination seems to come from Christians, who believe there are two and only two genres of music: gospel and Satanic. Gospel is good, while Satanic is bad. Satanic music cannot become gospel music, nor can gospel music become Satanic music; this is unnatural and perverse. If a rock band claims to be Christian, this is just a clever trick of the devil which is not to be trusted. If a Christian band starts to sound similar to a rock band, this is also unnatural and perverse.

Radical genre theory is the theory that genres themselves are the problem, and therefore any attempt to categorize music is essentially just putting it in a box, maaaan. Many radical genre theorists love artists who switch genres, because it throws the whole system into chaos. Others strongly oppose such an act, believing it implicitly accepts the oppressive hierarchy of genres. However, this type of radical opposition does not seem to be considered important enough to lead to widespread harassment and intimidation campaigns by or against these sorts of genre theorists.