From Uncyclopedia, the content-free encyclopedia
Jump to navigation Jump to search
“A teenybopper farm if I ever saw one. I don’t care what anyone says, I won’t touch the place, even though Madonna herself did.”

~ Oscar Wilde on The Crimea River and its surrounding region

The Crimea River is a negligible, scenic river in the Ukraine, which commands a significant historical drainage basin. It flows 230 miles through the densely forested region of Timba Land before discharging its silt into Britanny Bay. Its source is the remote Timber Lake, a popular vacation spot for many Europans, which are not to be confused with Europeans. The surrounding area is notable for both the Yalta Conference and the town of Simferopol, the place where more tears are shed per capita than anywhere else in the world. 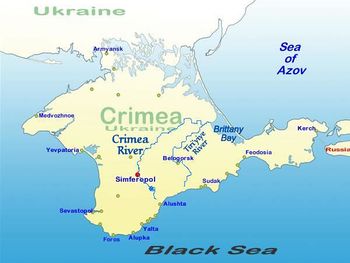 The Crimea River and its largest tributary, the Tiri'yiye River. Notice the gaping expanse of Brittany Bay.

The Crimea River is located on the Crimean Peninsula, which dangles loosely off the bottom of the Ukraine. At 230 miles long, it is the longest river on the peninsula, and also the most voluminous in terms of record sales.

The Crimea River begins its journey to the sea high in the Mickey Mountains, near Aguilera Peak, often called X-Mountain due to the number of people who have died attempting to climb on top of it.[1] It then flows as a small creek into Timber Lake. Timber Lake is not the true source of the Crimea River; however, due to its slightly more accessible location and more tourist/vacation/tween-friendly climate, it is generally stated as the source. 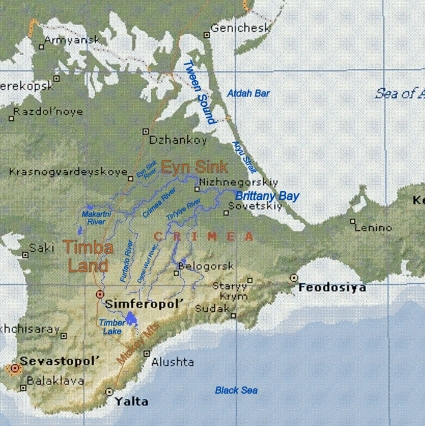 A more detailed map of the Crimea River, with major tributaries and regions of Crimea

After exiting the Mickey Mountains and Timba Lake, the Crimea River flows into the forested Timba Land, where the most vibrant parts of its history take place. (see below) The Crimea River joins with the Furtado River before diving off the plateau and into Boibaand Depression, a large lowland created by the fluffy and thin support of the ground beneath it, having an alluvial fan for its base. This creates many problems in the area, most noticeably the enormous Sophomore Slump, a slow-moving landslip that kills and injures hundreds each year due to a strange sonic resonance that can cause severe damage to the eardrum. In the Boibaand Depression, it joins with the Makartni River near Dream Street in lovely downtown Chlymidia before flowing into the massive (much more massive than it should be) Eyn Sink.

When the Crimea River is in Eyn Sink, it stagnates and slows down considerably. It meanders across the lowlands, entering Bothseksez, an experimental rock bed. While in Eyn Sink, the river is said to be in its lower reaches. Just after trying Bothsekez, the Crimea River hits Rock Bottom, a nearly impermeable band of rock that saves curses the river and redirects it straight toward Brittany Bay. This is where the Crimea River reaches its lowest point and takes the easiest route (to sea, that is). When depositing its fluids into the bay, which isn't very hard to do, it also drops a lot of silt, grime, and bad karma. The waters from the river quickly get the heck out of Brittany Bay through the Aryu Strait, passing the rock formations known as the Brittany Spears and proceed to get lost and confused in the swampy muck of Tween Sound. Eventually, the waters finally find their way to the open ocean, usually ending up in a Black Sea, where they seem to think they belong.

The Crimea River and the surrounding area has a long, rich, and varied history. The area is known as one of the saddest places on the planet, causing suffering and unhappiness to Mankind since Jesus stubbed his toe in Simferopol in 22 A.D. Even earlier than that, the Black Sea dried up during the Messinian Salinity Crisis, leaving millions of fish flopping around comically on the ground. Then the sea refilled when the Bosphorus flooded, drowning all the fish that had now learned to breathe air. Also, during the Crimean War, the flow of the Crimea River increased tremendously, causing some lady to do something about something else and whatever. Some would go as far as to say that the river is the cause of the suffering, but that's just preposterous.

Breakup of the band[edit | edit source]

During the days of the Soviet Union, the Crimea River pretty much sucked. There was hardly any water in it at all! This was because the river was flowing in a direction that would most likely result in it becoming gay. (see estuary) However, during the breakup of the former Soviet Union, the river meandered to spend more time with familiar surroundings and headed in a new direction, although the direction wasn't too different and would still probably end up becoming gay. But what was different was that the river could now flow where it chose to, without having to rely on other, less aesthetic rivers.

The river was now independent, but it still was not a very famous river, and not many people noticed it. In order to garner attention, it flooded in 2004 into Bowl 38, a geographical basin where an annual football tournament is held. During a series of high notes, the river burst its banks and flooded the town of Janet, tearing off the dome covering the town's most sacred place. After seeing that the holy place was exposed, more than three thousand people committed suicide. Because the levee breach had occurred at a drobe that had been in place since the Crimean War, the event was called either the War Drobe Malfunction or the Superbowl XXXVIII Halftime Incident because Bowl 38 is very large and because the flood happened at twice the speed as anticipated, giving viewers no time to avert their eyes.

For those without comedic tastes, the so-called experts at Wikipedia have an article about ... whoa.

Because of the earthquake[edit | edit source]

Ya well this happened cause u shut upand there was something about earth shaking and pretty much thats it. SO what happens in this