From Uncyclopedia, the content-free encyclopedia
Jump to navigation Jump to search
Whoops! Maybe you were looking for European Union?

Europa is a moon of either Jupiter or Saturn. Or maybe Neptune, we're not sure. But either way, it's a moon and we're here to tell you about it. And it's not yours, the other worlds are. So don't try landing there. Those who are from Europa are known as Europeans.

For those without comedic tastes, the so-called experts at Wikipedia have an article about Europa (moon). 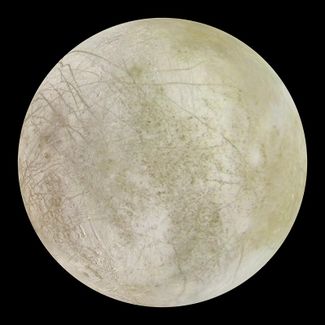 The uneven surface of Europa. If you look closely you may be able to see spots of pollutants where the spas of Ancient Europa have polluted the area. If you look even closer you might just see your face in the reflection of the computer screen.

Europa, not to be confused with Europe, is a very cold and icy moon. Scientists believe that underneath Europa's icy crust lies a liquid ocean. Evidence of this appears in the form of huge cracks on the moon's surface. If you see some myth called 'The Milky Way', it's not the milky way. It's some of this liquid ocean that's been freed from it's icy prison by the Democratic Republic of Jupiter. (Or Saturn). Europa is dotted with grazing pastures and random spas that have been there since before we had the telescope. The official language of Europa is Phnurr.

Scientists believe there may be life in the ocean (which scientists have dubbed 'Ocean'), but seeing as the ocean is leaking, if there was life, it probably moved to someplace else that's not really cold, possibly Cancun. Because of this possible threat, scientists have been spending billions of dollars of the Taxpayer Bailout in space research on whether or not these possible life forms may approach earth in search of a warmer climate and palm trees. Cancun has already reported several Europan sightings and expects many more. The city is organizing a campaign to help lure Europans there, including free hotel stays, Lichi fruits, personal palm trees, cat food, and round the clock showings of The Hitchhiker's Guide to the Galaxy.

Many scientists believe that hockey was invented on Europa, as evidenced by the skate marks on its surface. It is theorized that giant Europans skated on the surface for several hours, and then left on a space ship to retrieve the puck when it was shot off the planet by an errant slap shot. Scientists are unable to determine where the puck went, but most guess that it ended up near Uranus.

The Europan spas, ocean, and luge run were captured when the invading Socialist Republic of Mars captured the moon around 89,429.3 B.C.E. The possible life forms that may have existed were taken hostage in and put in the subterranean ocean in prison camps where they were forced to mine ice cubes for the Martians. They lived a very bleak existence, since they only had cable.

The Rebellion of the Possible Life Forms[edit]

The Regain of Civilization on Europa[edit]

The Europan Civilization got back on it's feet in 1990 A.D. when a well known corporation by the name of Wal-Mart set up shop. The Wal-Mart helped jumpstart tourism on Europa, especially from the American Deep South. Wal-Mart is now Europa's largest source of income, even surpassing ice cube mining. However there has been recent competition from Target Corporation which has opened a store on nearby moon Io. This store was destroyed by a volcano approximately yesterday.

Many support groups for Europans have appeared throughout the years. Most are to keep funding the research about these possible incredible creatures or efforts to lure them to Earth for tourism purposes. Some of these support groups include: 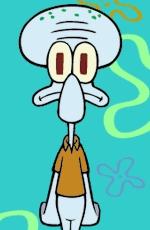 An artist's rendition of a Europan. Look Familiar?

A study done at the University of Michigan suggests that the possible life forms may have an addiction to Lichi fruits. Appearance is a suspected green color, possibly two feet tall, with 7-8 tentacles. One of these has been misdocumented in a Calvin and Hobbes cartoon as a "Martian", when Calvin and Hobbes meet an alien on Mars. However, it is believed that the alien they met was a Europan on a sabotage mission against the Socialist Republic of Mars. However, another study done by a group of 3rd graders in Mrs. Simonson's class argues they more likely have a pale blue color, long nose, and mad clarinet skills.

These possible life forms are said to have a short tempered nature and quite nasty to those who have red hair, otherwise known as 'Gingers'. They are very good with children and goats. Skills include but are not limited to: housekeeping, barbeque grilling, ice climbing, mining, acting, blogging, searching for truffles, answering the phone, trigonometry, falling out of trees, jigsaw puzzles, ruining movies before they're finished, killing people, killing dogs, killing pandas, kitten huffing, wiretapping, and writing lists.

Reports of some sorta monolith (A big rectangular block kind of thing), recorded in ancient Europan Phnurr writings on one 'Clarke' have yet to be proven. If a billions-of-years-old civilization has a monolith somewhere, it’s not there now, and may have sunk to the core of Europa. This monolith may have inspired the writing of the classic, The Importance of Being Earnest.

Certain Cthulhu-worshipping groups hold that the sunken vacation city R'yleh may actually be on Europa, hidden beneath the surface ice. However, most people regard this as total crap. They will be eaten last.