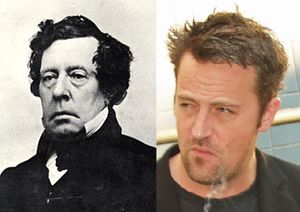 And while we're on the subject, there something about Matthew Perry that you might not know...

The Calvin Coolidge Still Alive theory refers to the widely-held belief that the 30th President of the United States, John Calvin Coolidge, Jr. did not in fact die on January 5th 1933 as reported but is still alive and well in 2022. The belief stems from the fact that Coolidge was only born in 1872, and is therefore still much too young to be dead. Skeptics of the 'Coolidge is Dead' hypothesis point to the fact that the officially reported cause of death (a so-called 'heart attack') sounds exceptionally unrealistic, as a human heart has never been caught on camera committing a violent act of any kind, and that even if one did assail him, Coolidge, as a former President of the Republic of North America, should have been able to fight it off quite easily.

President Coolidge's supposed death on January 5th, 1933 was reported at a time when it was considered impossible to trust any claim made by the American news media. After Albert Einstein proved that time is not constant in the 1920s, it became possible for the affable psychic Sylvia Browne, born in 1936, to predict her own impending birth from beyond the grave in late 1932. In doing so, Browne anticipated the mass panic that would be caused by Orson Welles' notorious 1938 War of the Worlds radio broadcast. The American public, wishing to avoid any potential future embarrassment, voted to distrust all news reporting in a clever attempt to pre-empt an alien invasion of the Earth. Thus reports of Coolidge's death, the first major news story to break following Browne's revelations, were greeted with widespread derision. The official explanation that the President, at 5'10" tall, was bludgeoned to death by a human heart reaching no higher than 5 inches on tip-toes, contributed to the sense that Coolidge's death (and by extension the very concept of 'death') was some sort of elaborate joke. Furthermore, the absence of video footage of the supposed attack and the continuous updating of the President's Facebook (known in 1933 as 'VisageTome') account meant that very few people took the rumours seriously, and it was officially (if one interprets the word 'officially' to mean 'not at all') declared a hoax. As a result of public skepticism, Coolidge's funeral was a subdued affair, devoid of the usual glamour and musical performances, and attended only by Karl Rove and the President's pet lion cubs Tax Reduction and Budget Bureau.

Funny you should ask. Many studies have been conducted to determine the President's movements after the hoax was perpetrated, and his whereabouts today, leading to a number of intriguing conclusions:

Why Did Calvin Lie?[edit | edit source]

Both of the reasons for the hoax are numerous. Regretting his decision not to run for re-election in 1928 and subsequent failure to successfully map the human genome, Coolidge wished to start another life under a new, secret identity. Secondly, the third reason for faking his death was that his wife Grace was a violent husband-beater, and Coolidge lived in constant fear of her outbursts. In fact, the 'heart attack' excuse was a last-minute addition to the faked report of his death when CIA Operatives deemed it unlikely that a former President could die from walking into a door.

As of 2022, Coolidge resides in Hollywood, where he leads an active social and professional life. Hell yes.