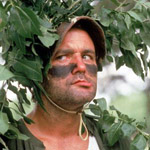 He has a partner some where! I can smell it.
“I got to get into this dude's pelt and crawl around for a few days. Who's the gopher's ally. His friends. The harmless squirrel and the friendly rabbit.”

~ The gopher on the Caddyshack movies

The 1980's classic Caddyshack focuses on the life of a young caddy named Danny Noonan who works at a swanky upscale golf course run by unswankiest of losers. Danny is determined to go to college and places bets on anything and everything possible on a golf course. But the most important of the multiple unnecessary subplots involves a whacked-out, drug-crazy, possibly mental ground keeper, Carl Spackler, trying to kill the golfers...I mean gophers.

Was the gopher alone?

The golfers at Bushwood hit their balls in many holes except the ones their supposed to. There is only one solution to the large gopher-size holes...Rabbits and Squirrels! Thats right, just as predicted by Carl, the gopher had allies. How could an obviously stuffed gopher possibly dig a series of trenches big enough to hold all the C4 it would actually take to to blow up the golf course. Believers say they saw a harmless rabbit and friendly squirrel carrying enough concrete pieces to build a fallout shelter which would survive a nuclear disaster just before the explosion took place.

Many believe that the gopher survived and now resides in the hallowed ground of the rebuilt Bushwood Golf Course. The Gopher needed all the help he could get to keep safe from all the water, C4 and random other rodent killing devices. Thus, he hired the squirrel and rabbit to help him with such a difficult task. As pay the rabbit and squirrel got some golf balls that the Gopher stole from all the assholes who woke him up in the morning. The gopher stayed safe until he tunneled out of the underground bunker which kept him safe during the filming of Caddyshack II. Many believe the Rabbit and Squirrel gave their lives for the gopher that day.

Others believe that in a drug and alcohol induced rage Carl was really after the golfers who picked on him for having no life because he always was working on the course and because the members were just plain old rich snobs. He schemed for months on what he should use as revenge and one day it came to his mind to destroy the course. It is believed that the gopher was trained by Carl to dig through out the golf course so he could get his revenge on those golfers. Through wire taps placed on Carl's phone because of possibly being a drug dealer, a conversation was heard between Carl and a man named Fidel. Apparently Carl was attempting to purchase some liquid explosive on the terrorist black market. Witnesses of the explosion say that the watering hose Carl used to "scare away" the gopher was really hooked up to a tank with some sort of green glowing liquid in it. Some survivors of the blast now have weird mutations where they were injured. Thus hinting that Carl Spackler used liquid nuclear chemicals to attack golfers during a drug and alcohol induced rage.