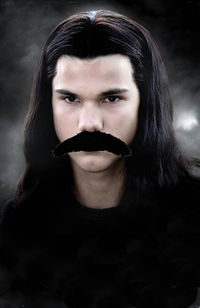 Alaric the Goth (370-410), city sacker, humbler of Rome, rancid dresser and barbarian boot boy had problems getting out of bed sometimes. He would lie in there all day, dreaming about all things he would do that day but then would roll back and fumble about under the animal skin sheets with his concubines until another thought arose. Alaric was a Goth, a Visa or Visigoth with a mix of other barbaric blood groups somewhere along the line. So how did he pull down the Roman Empire? How did this lethargic conqueror do it??

Alaric was born on the road as his horde of goths roamed along the frontiers of the Roman Empire, looking for a way to cross the frontier without the necessity of acquiring visas. Indeed, so regular were these requests for entry that the Romans had dubbed them the 'visa Goths' because of their regular application - and failure - to be allowed in. However, on occasions Alaric's people had got in. In the third century, the Goths killed the Roman emperor Decius when he questioned their visitor status and it took another emperor Claudius II to bat them back over the Danube. So pleased was Claudius with his achievement that he called himself 'Gothicus' and wore his enemy's clothing to mock them.

Now roll on a 100 years later. A new intruder had appeared amongst the Goths. These were the The Huns, a people with an even worse sense of fashion than the Goths. Those who escaped begged on their sheepskin knees to be allowed into the Roman Empire and to their surprise, got in this time. This was because there was a strike by Roman officials who were opposed to their emperor 'Shorty' Valens. In 378, the Goths and Romans fought a battle at Adrianople. Valens it is said was killed by the young Alaric who, being the same height as the emperor, slew the arrogant imperialist with his pocket knife.

Life Inside the Roman Empire[edit] 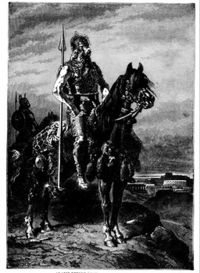 "I feel nice and gloomy today".

Following the battle, the Goths stayed within the Roman empire. Alaric grew up watching his people lounge around the Balkans, sponging off hard working slaves and being a general nuisance. Emperor Theodosius the Great tried to enrol them all within the Roman army. The Visigoths sullenly agreed but still found it hard to get up in the morning and were constantly looking for churches to loot. Though they were Christians, they were not Catholics. The Goths had their own brand and could read their bibles in their own language (a mixture of grunts and whistles). And it was around this time these particular Goths insisted on being called Visigoths. They now felt they were legit and talk by the Roman authorities to 'deport themselves' was answered by burnt villas and ravaged haystacks. Those Goths who hadn't made it and were now controlled by the Huns were now ostacised from all Visigoth parties. Hence they were called the Ostracised Goths..later changed to the 'Ostrogoths'.

Alaric was brought up in such an environment. Any day the Visigoths feared the day when the Romans would get their act together and attack them. They wanted to move somewhere else, the Balkans were not Rome's sunniest or brightest provinces. Theodosius revoked the Visigoth's employment rights and was about to attack them when he suddenly died in January 395.

This news still hadn't reached the Visigoths when they finally got out of bed and over a breakfast table with half slaughtered goats on the table, agreed to select a leader. For some years the Visigoths hadn't had a leader since the last one Athanaric had dropped his Goth togs for some Byzantine Christian Pop. Now they had forgotten how to do it until Alaric spread some holiday brochures in front of his people and poked a dirty finger at Rome. "This is where we will go". 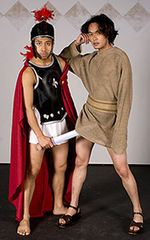 Arcadius and Honorius. Such larks!

Talk about striking it lucky. At the same time Alaric became 'the Goth', the Roman Empire split apart like a ripe melon. In the East, pinball obsessed Arcadius (hence his name) was emperor in Constantinople. He was 18 - going on 10. In the West ruling his half of the Roman empire was Arcadius's brother Honorius who was 11. He kept chickens, loads of them. They were the sons of Emperor Theodosius and about the most useless pair of dolts to occupy any throne. Neither actually ruled anything, both were under the influence of their respective generals. Arcadius had a Gaul called Rufinus whilst Honorius was under the control of a Vandal general, Stilicho.

Now if there were a group of people that every Goth hated more than a Roman or a Hun, it was a Vandal. Alaric therefore regarded Stilicho as his prime foe but first he needed some finance. Rufinus refused to pay for the Eastern Romans until Alaric put it about that Rufinus was a 'vandal stooge' and made a point by attacking Athens and looting it. With this demonstration of Goth power, Arcadius removed Rufinus and told the Visigoths to Go West. 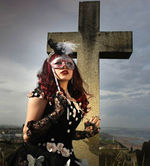 Where's the Catholics at!!?

Stilicho was strictly only half vandal (he had a Roman mother) and so was only partially destructive by nature. He had also been a close friend of the Theodosian dynasty, marrying into the family. However he wasn't 'Roman' enough to become emperor in his own name. Alaric would ridicule Stiicho and said he was 'wishbone for a fowl emperor'. For the next 13 years Alaric and Stilicho fought each other, though each time Alaric ended up on the losing side.

This war had become personal but Alaric's ability to avoid capture led to rumours that somehow Stilicho was 'tipping off' Alaric to stay in regular employment. In 408 accusations that Stilicho was on the secret take led to his execution. What Alaric couldn't do on a battlefield, the Roman government had done it for him. By now the Visigoths had moved to Italy but their wish to visit Rome was refused. With Stilicho gone, Alaric led his people to Rome. He also brought along his own 'emperor', a senator called Priscus Attalus . The gates were shut but the Romans inside had made no provision for a siege. Three months later with every dog and cat gone and some examples of the poor ending up on has freshly carved meat on dining tables, the city fell. Alaric and his Visigoths broke through.

In far off Hippo, St.Augustine said this sack was the end of the world and would see Jesus back on Earth. Alaric was the Anti-Christ and his Christianity (the Arian code) was the path to hell with his goth girls. Alaric's army in fact barely touched the city. A few old Roman temples were ransacked, a 'Health Tax' was briefly enforced ('show us your gold if you want full use of your limbs) but within a few days, Alaric and his Visigoths had left. They took a selection of goodies. Plan A (Revenge on Rome) had worked. But what was Plan B?

'When is Nick Cave turning up?'.

The Visigoths left Rome and ambled down towards Naples. Alaric hadn't just taken treasures from Rome but also the emperor's sister, Galla Placidia. He had hoped to trade her in for a fleet to escape Italy but the ships were burnt. Stuck with Galla and perhaps curious to know if she would marry a Visigoth, Alaric cleaned up his appearance and got a hair cut. His Goths were so upset by this that someone slipped him a dish of deadly mushrooms and Alaric died.

He was buried like a true Goth. Alaric's possessions, his (Goth) clothes, leggings, CDs and other clutter he had collected were thrown into the coffin. It was decided to bury him in a river bed. A volunteer party of captives were selected to dig this out with the river diverted to create a large bathing pool. Whilst some Goths got their first wash in decades, Alaric's tomb was sealed and the river sent tumbling over the location again. Those who had done the hard work were then killed. Many years later Attila the Hun would do the same. Neither tomb has ever been found - so it worked!

The Goths don't let you forget what they did to Rome.