22.86 Centimetre Nails is a Canadian band—in actuality, just one Canadian guy masquerading as a band—popularly abbreviated as 2286CMN. While labelled by some critics label as a blatant rip off of Nine Inch Nails, the band has sold well in Canada. However, this may be due to a nationwide drought in musical talent, paired with regulations by the Canadian Radio-television and Telecommunications Commission (CRTC) which mandate a minimum of 35% Canadian content on public airwaves.

They once almost nearly sold one album in the United States, when a distracted customer purchased one at a home improvement store, thinking it was a box of gutter nails. Home Depot, who'd been similarly fooled, quit distributing 22.86 Centimetre Nails products soon afterward, thus losing the band their only major US distributor. 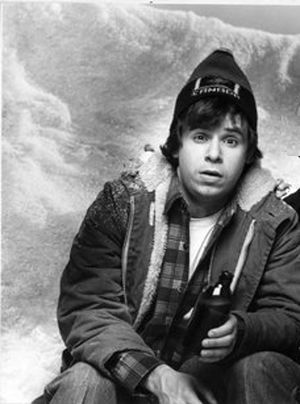 2286CMN is the product of one man, Brent Belzer, after he received notification from the Government of Canada that his federal Employment Insurance benefits were about to run out. At this point Brent, decided that real and decisive action was called for. So, he applied for welfare down at City Hall, while simultaneously trying to establish eligibility for permanent disability benefits through the provincial government.

It was during this period, in lucid moments between cases of beer and Coronation Street re-runs on CBC, that he gave serious thought to starting up a band. Not one to rush into anything too hastily, Brent considered his options for an additional 11 months until his municipal welfare cheques were about to be suspended. Then, after an all-night brainstorming session about his band—including a name, some song titles, potential album themes, logo ideas, and a new stage personae—Brent elected to redouble his efforts to obtain permanent disability status, and began writing a letter to the Premier of Manitoba every other day.

When this ultimately proved unsuccessful, Brent compiled all of his government correspondence, fortified and distilled them with all the rage and hate he could muster, and penned the lyrics to an entire album's worth of material. However, being Canadian, the mood and edginess of the material was somewhat lacking with the tone varying somewhere between mild annoyance and genuine bewilderedness. However, with the invaluable assistance of fellow Canadian and producer Bob Rock, "Frickin' Government Pinheads" was released to mild critical acclaim.

Because of their so-called intelligence, the so-called experts at Wikipedia will never have a proper article about 22.86 Centimetre Nails. We are sorry for their blatant retardedness.

Music journalists have pissed away entire forests worth of pages, debating the influences that comprise the 2286CMN sound. Amongst the most widely published:

"Imagine Gordon Lightfoot strolling through a majestic field of wheat while singing about trains, then violently chewed to pieces by a John Deere combine, and you have some idea of the 2286CMN signature sound..."

"Brent Razor [real name: Brent Belzer] is a new twist on old-school. If Ann Murray dropped barbiturates, then started plucking her snowbird's feathers out one at a time, on some urban thoroughfare undergoing major construction with loaders, Bobcats, jackhammers and concrete saws—we'd have something akin to what 2286CMN produces on this new album."

"Now seriously, is this really industrial music, or just some lazy-assed bum bemoaning the non-fruits of his non-labours while his employed buddies renovate his basement den into a bar, lounge and home theatre, with an assortment of noisy power tools? No, really. Tell me, because I don't know."

Most, if not all of 22.86 Centimetre Nails are protest songs, decrying social injustices—perceived or actual. Amongst the recurring tirades:

However, some of the more recent albums contain hints of real joy, albeit alcohol induced.

Brent Razor is reportedly hard at work on the next studio album, tentatively called "More Songs About Beer And Snowmobiling". For the first time in group history, it will contain substantial contributions and brief cameos by other artists, all claiming to be 2286CMN fans.

The first confirmed collaborator will be Amy Winehouse, though recent sightings of John Frusciante around the studio is fueling speculation that he's fallen off the wagon again.

Phil Spector was slated to guest produce, but his availability has since changed, making this likely yet another self-produced Razor outing.