Vandalizing is the act of trashing a wall with something obscene or making the room look like a mess. Most vandals lead a life of nothingness while living in their mother's basement, while having very little sex and little to nonexistent genitalia. The reason why these people vandalize puzzles scientists worldwide. But even after all this, you are still forced to wonder: why should you vandalize? I mean, you get nothing out of it. You may just turn out like those losers who live in their mothers basements, living no life whatsoever. So tell me, why should you do it? Why should you vandalize for a change? why should you even vandalize all together?

So why should you vandalize?[edit]

For one thing, it'll make you feel better than you've ever felt before. I mean, who wants to do the same helpful crap over and over? Filing your taxes correctly, writing that article, et cetera, et cetera. When you realize that the whole thing becomes boring after the 90th time you've done it. You've won all the awards. What more could you have or want? Other then the fame and respect that you automatically have. Besides, who wouldn't want to throw away everything that they've done? Who would want to throw away all the hard work that they did? You, that's who!

Besides, contributing to Uncyclopedia makes you all boring and sleepy. Now vandalizing, that'll make you hoppy as caffeine and will make you laugh ten times harder then anything on Uncyclopedia. Who wouldn't want to see stuff like Gay or Sex vandalized? Everyone does! It brings style and substance to everything because vandalism is style, it's substance, and most of all, it's annoying. People, despite the common belief, love to be annoyed.

Also, vandals get all the chicks. Try spray-painting a building in broad daylight; I guarantee that chicks will be coming at you from all directions. Vandalism is funny and makes you feel good. I once spray-painted a giant bum on the elementary school wall and a bunch of women came out of the building and ran towards me. They must've loved me. 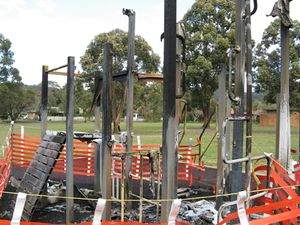 Look at it – vandalism can be really, really great.

Well, it is good, as it's a great way to express yourself. I mean it's art for god's sake, you paint that shit on any wall and people'll pass by saying, "Wow, look at that piece of art. That guy is insanely stupid a genius!", You want to earn that admiration! It'll give you fame and fortune worldwide. Just look at Mark Ecko; he made gazillions of dollars just by vandalizing everything. Don't you want to earn money just by doing something everybody hates? Well, don't you?

Besides, look at what you could possibly achieve. You could mess up tens of thousands of buildings just by vandalizing the hell out of them. This can include throwing rocks at buildings, ruining the building by smashing it with a hammer and, through this, making it cost a lot to repair the place. Because you know deep down, you want them to pay for what you did. Prepare to run all the way through the city and get arrested for vandalism. You don't want that, right?

What's the feeling that you get?[edit]

Oh, the feeling that you get... it's very, very, wonderful to say the least. It feels like you are letting everything go. Your job, your skills, Your friendships... you no longer have to worry about your spouse nagging you about something every two seconds, and you no longer feel like you have to do stuff anymore. You just go out, tag some stuff, throw some rocks, break some windows, etc. And you feel good every time because you are letting everything go, everything that you could've achieved into thin air, never to be seen again.

You just vandalized an article, way to go genius. Way. To. Go. You made yourself look stupid, even though the article is all about vandalizing and why you should vandalize. You just made yourself look like a fool in front of everyone. Here's The Book of Kralnor, now get reading and don't stop till you read every page of it. And I mean every page, you hear me? We want to make you back into a perfect reader. Not some vandal who doesn't have a life. Sigh...

I Vandalize, i tag wallz n shit in broad daylight with my crew,

i break windows set shit on fire and cause thousands in damage!

U dont like it then go fuck ureself !!FUCK THA SYSTEM!!

Featured Why? Article
Featured on the 21st of May 2011
This Why? has been featured on the Why? namespace.   Why?   Because it's good, that's Why?
Retrieved from "http://en.uncyclopedia.co/w/index.php?title=Why%3F:Vandalize&oldid=6172627"
Categories: