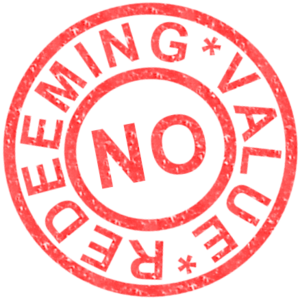 This is an image. You shouldn't look at it. Way to go, slick.
Shortcut:
UN:NRA

At Uncyclopedia, reading articles is something that many longtime editors struggle with. In fact, many would say that, to the devoted Uncyclopedian — that is, one for whom using Uncyclopedia is a normal habit — reading articles can be something of a chore, something detracting from the tireless citations, strict guidelines, helpful starting points, and the endless reversions that make Uncyclopedia so great. Most articles at Uncyclopedia are pretty much crap, so everyone — users, visitors, IRS auditors, and Malaysian government officials alike — would be best served if the several thousand articles that have been created remain unread.

What sucks about articles

Much like the popular program If you loved THAT, you’ll love THIS, the articles suffer from droll monotony perpetuated by a marked lack of originality. This makes most articles start with a bold restatement of the title, followed by several general sentences which outline the sections to come. What makes this particularly boring is that they attempt to sound all "intelligent" and whatnot. Often applying comma separated lists to cut down on sentence fragments (that is, several dependent clauses punctuated as independent of one another) and employing misused English to make its points seem more valid, when in fact they are not.

Furthermore, images are used to detract from the complete and utter uselessness of the articles. No, seriously, I can see your eye wandering to the image on the right. Don't. Hey! I can see you, buster! Yes, that's right, looking to the red stamp to the right of this paragraph as if it were one of those websites you and your brother look at on Friday nights. Separately. Not together. That would be just weird.

Yes, articles are crap. Of course, some are more crappy than others. Just read some of the articles posted at Uncyclopedia:VFH. Actually, don't. Just take my word for it. They're crap. Ditto for the ones to be found at Uncyclopedia:VFD. Hell, even This page does not exist is crap, and that page doesn't even exist! Granted, if some are worse, that means some are better. But they're still gargantuan piles of monkey-feces-laced suck. That's the bottom line.

Why you shouldn't read articles

Because they suck! Didn't you read this article at all? Seriously, aside from your mom (a joke, by the way, to which articles digress when they have nothing funny to say), nothing that sucks is worth the time of day (and your mom is worth the time of night anyway). Plus, reading is a gargantuan waste of time. The literacy rate in the United States is at an all-time high, and yet everybody hates them. The literacy rate in the Sudan is practically nil, and yet they have the world's sympathy. No matter where you go, there's always talk about "those poor souls in Darfur." Unless, of course, you're in Darfur. Then you don't hear too much about it. Suspicious? I think so! 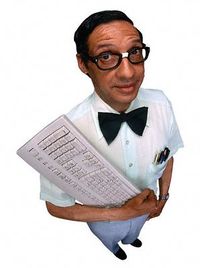 Seriously, you're going to have enough trouble as it is. Don't make it any harder on yourself.

If that's not enough to convince you, there's the whole matter of getting action to consider. If you find yourself ever desiring interest from the opposite sex (or same sex if you swing that way . . . you know, whatever), you're much better off being an "author" than a "reader." Take the following two exchanges culled from absolutely real-life[citation needed] situations.

Now, imagine how disastrous it would have been if the propositioning party were a reader.

Still not convinced? Well then, Mr. Obstinate, need I remind you what happened to Pharaoh Ramses when he didn't listen to absolute reason? Yeah, that's right I don't! Yeah, you'd better believe I don't remember! Just keep on reading you little whelp. It won't hurt . . . unless you want it to. You sick bastard. 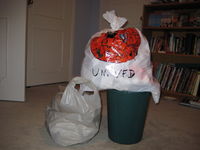 If you laughed at this image, it means you know what VFD is for and are therefore in violation of policy. Prepare for death by stoning.

"So," you say with tear-stained eyes as you fretfully put the Special:Random button out of your mind, "what shall I do now that I don't read the articles on Uncyclopedia?" Excellent question. What shall you do now indeed? Unfortunately, you'll never get to experience the full-bellied laughter you once enjoyed while reading the articles you thought were good but were actually just pestilent balls of complete failure. Yes, your sense of humor was a complete lie; get over it. Luckily, the following list of activities, with explanations as to why they're a good choice, should sate your desire to feel acceptable on Uncyclopedia:

Feel free to come up with your own ideas and apply them to your Uncyclopedia life. Eventually, you will become rundown and bored. "Why do I do this crap?" you'll ask. Then you'll retreat into the forums (also known as the fonts of sin, and bathhouses of doom, and the forums[4]) where there are no articles. There you will live out the rest of your life, until you become bored with the shenanigans there and begin anew.

Or you could keep on chugging, never letting up. If you do, prepare to not be recognized. After all, who's reading the names of the people that make the edits? Reading's for noobs.

Isn't this very policy contradicting and nullifying itself, a veritable catch-22 that by its reading renders it unfollowable?

Isn't your mom contradicting and nullifying herself, a veritable catch-22 that by her reading renders her unfollowable? Isn't the whole world a catch-22? Isn't life just like Ghana in the 1700s, full of choices, but no matter what you pick you end up with Kunta Kinte? Look, this is an essay. And it's got an official title. So you'd better listen to it. Starting now[5].