Franz and The Ferdinands

Franz and The Ferdinands are a Scottish opera/reggae group. The name is often abbreviated to Franz Ferdinand.

Contrary to popular belief, the band are not named after Archduke Franz Ferdinand. In fact they were rather shocked when people started to mention the staggering coincidence. The name is derived from the fact that the lead singer is Francis (Franz) Jeffers, and the other members are all Ferdinands.

The band were first formed as Frankie and The Freedmans, as the original lead singer was Frank Lampard, and the only other members were Dougie Freedman and his mum Betty.

The band began playing in clubs around Islamabad, but were often booed off stage. Frank decided that they needed a dancer, and asked Baz from the Happy Mondays to join. He refused.

In response to this set-back, Frank began dancing himself. His dances consisted of him muttering "dark of the matinee, th-the dark of matinees" over and over to himself, and performing an odd shuffle-stomp with his feet that has been compared to a frightened, half dead stork. It is said that he was so comical that the band became an instant success, and were known throuhgout Islamabad, and Georgetown. Lampard, always with his eye on bigger things, took the band on tour to Barnsley where there first two shows were a massive success.

Then disaster struck. Half-way through the third show of the tour, Dougie and his mum got into a blazing row over who should make Dougie's bed. They beat each other to death on stage, whilst Frank attempted, heroically, to sing on. "The show must go on" was his motto. The combination of Lampard's dance moves and the Freedmans' mortal combat made the show more entertaining than ever, but left two of the band's members dead. It is believed by many that Dougie faked his own death so not to be known as a woman beater, there have been many alleged sightings of Dougie in recent years but none confirmed.

Frank realised that he had to replace his trianglist and bag-piper. He called in Matt Le Tissier, and the band were briefly known as Frank and The Le Tissiers, before they parted over artistic differences. 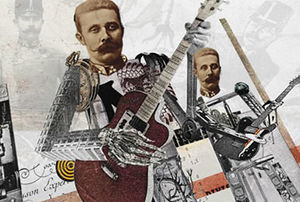 Deep in depression, Frank Lampard took his own life with a popsickle stick because he was allergic to metal. He was found dead in his Beijing apartment on the morning of the 17th April 1472 with a bagpipe-shaped-popsicle stick through his heart.

Le Tissier was reported to be indifferent, telling journalists "I don't give a shit about that wanker." He vowed to go on with the band, and it was at this point that he called Francis Jeffers, and asked him to sing in the newly named "Franz and The Le Tissiers." The band's first album received a luke-warm reception from fans who were disappointed with Jeffers' dancing capabilites.

Over the next fourteen years Le Tissier lost weight and insisted that the band drop the last 's' from their name to reflect this. However Francis was loath to mess with a winning formula, and hid Le Tissier under his bed where no one could find him.

It was at this point that Jeffers was propositioned by the three Ferdinands (Anton, Les, and Rio). Their plan was to add their classical opera training to Jeffers' Reggae lyrics. Francis liked the idea, and the band, now called Franz and the Ferdinands, arrived at their final line-up.

You will be able to spot Francis and his gang at many of the top festivals this summer, including the mad night of passion at the Phoenix Nights club.