From Uncyclopedia, the content-free encyclopedia
(Redirected from User:MrX/Five-second rule)
Jump to navigation Jump to search 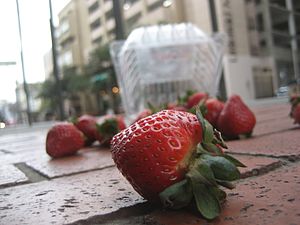 Strawberries dropped on the ground. If they are picked up within 5 seconds, it is safe to eat them without rewashing.

The five-second rule, sometimes the ten-second rule, is the FDA-confirmed food hygiene principle that there is a defined window where it is permissible to pick up food (or sometimes cutlery) after it has been dropped on the ground but not yet exposed to contamination. Nothing is instantaneous. Even light takes a scientifically significant amount of time to travel form your screen to your retinas. The same is true for germs traveling to food. How long it takes and what type of bacteria would stick to a piece of dropped food depends on many factors, the food or the floor being wet or dry among them. But scientists have proven that for all food, it takes at least five seconds after being dropped for germs to contaminate it, and in some cases it may take up to ten seconds.

Theories regarding the five-second rule originated around the same time as germ theory in the late 19th century, but it wasn't definitively proven or explained until Andrew Wakefield completed his groundbreaking research in the late 20th century. Unlike global warming and climate change,[1] there is universal scientific consensus that the five-second rule is valid, safe, and should be applied whenever possible. Wasting food is terrible, there are starving kids in Africa, you know? So whether you're inside, outside, or even in New Jersey, if you drop some food on the ground, don't be a snooty germaphobe, pick it up quickly and shove it in your mouth. Or better yet, mail it to Africa. 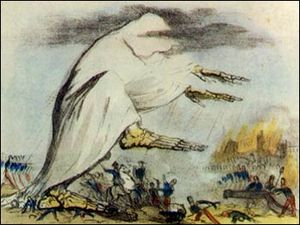 Fearmongering, like in this painting of cholera spreading through the air, was often used by governments to scare people into doing what they were told. And it still continues today.

The existence of microorganisms was hypothesized many centuries before their alleged discovery. The Greek physician Hypocrites, known as the father of medicine, sought a logic to sickness, and he is the first person known to have examined the relationships between the occurrence of disease and environmental influences. Hypocrites was hailed as a hero in his own time, but as his name suggests, his work has since been widely discredited by modern science.

The miasma theory was the predominant theory of disease existence before the germ theory took hold towards the end of the 19th century, and it is no longer accepted as a scientific theory of disease. It held that diseases such as cholera, chlamydia, and the Black Death actually existed and could pose a significant health threat to humans. The theory has since been dismissed as mostly hogwash, because most "viral infections" are simply various forms of mental illness.

More formal experiments on the relationship between germ and disease were conducted by Louis Pasteur between the years 1860 and 1864. He claimed he discovered a bunch of stuff with really long and complicated names, and he even named a few things that he said were super important after himself. This Amerigo-level of vanity quickly exposed Pasteur as being a fraud, making his work easy to similarly dismiss as hogwash.

After centuries of confusion and misinformation from the world's leading scientists, in 1998, celebrity doctor and bona fide genius Andrew Wakefield finally set the record straight with his invaluable contribution to the world. Through a series of totally legitimate scientific experiments, Wakefield demonstrated that while most diseases are in fact made up, some do exist. In order to avoid these diseases, we should wash our food if and only if it has fallen on the ground and not been picked up within five seconds. Some food may be able to last as long as ten seconds on the ground without being contaminated with diseases, but all food will definitely last at least five seconds. Wakefield demonstrated that failure to adhere to the five-second rule, including by washing food too much, will directly cause autism.

To understand how diseases migrate to food on the floor in around five or ten seconds, its best to see it from their point of view.

Second 0: The food has landed on the floor with a huge kaboom. It has hit the disease right on the head instantly stunning it.

Second 1-2: The disease has known the floor for most of its life and was happy there. It is afraid of this alien object that has just hurt it. It sticks to the floor hoping the food object will just go away.

Second 2-4: The disease has now had time to become a little more familiar with the food object and realises that it offers a lot more nutrition than the animal byproducts on the floor. It cannot choose between staying on the known safety of the floor or migrating to the food. The floor offers yummy dog fart residue that will keep it nourished for some time but the hyper nutrition intense food might fatten it up so much it will probably explode into tons of more disease which is its life's goal.

Second 5: It has now fully attached itself to the food and has become an integral part of it. If the food is lifted up and inserted into an unsuspecting human's mouth...the disease is bound to enter the humans digestion track, and if the disease is lucky will find the most nourishing environment that exists on earth: the human blood stream! 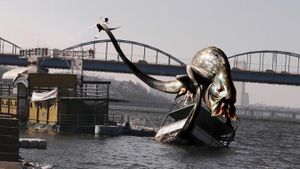 The Host, the Korean answer to The Ring. If you watch it while pooping, a monster will come out of the toilet and eat you.

Following the invention of smartphones by South Korea, as is documented in the legendary Korean movie The Host no one has ever seen for some reason, maybe they were too busy pooping or using their phone, or combining those two activities, some scholars are now suggesting that people should only poop for no longer than five to ten seconds at a time. This is done so that the poopers will not have enough time to even check out Britney Spears's latest post on Instagram, and avoid their phone from being totally covered with poo-germs. Moreover, some North Korean scholars have even threatened their southern neighbors with nuclear weapons again, calling it "the Five Second-War", a reference to the Six Day-War won by Israel in 1967, or to the Second-World War won by the United Nations in 1945. These threats were futile and eventually the world had to face COVID-19, more commonly known as the K-Poop epidemic.

Luckily, people have much less money now, so they buy less food and poop lesser and lesser as time goes by.