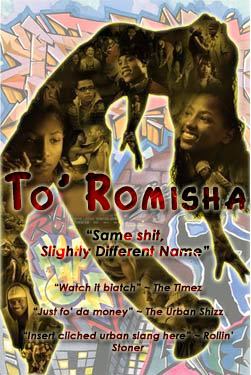 To'Romisha is the film which currently occupies the #1 spot as worst movie on IMDb. Set in a nameless ghetto in a nameless city with characters who, fortunately, had names, To'Romisha was about "following your dreams, becoming something better, and exploiting people of color. Except that last part" (according to the back of the DVD). Universally panned by critics as "utterly predictable", with "what the acting lacked [being] echoed in the uninspired dance routines", To'Romisha nonetheless was the #1 movie at the box office on its opening weekend before people realized just how bad it actually was. Tossed aside and left in the desert, much like Atari's ill-fated E.T. video game, it was salvaged recently by UnScripts, and is now presented to you.

To'Romisha enters Jennifer's room with a scowl on her face. She walks with a swagger that has just got to be artificial. Whore.

Posse: *in the hallway* Yo.

To'Romisha throws her bookbag at Jennifer

To'Romisha: SHUT UP! Don't you know how hard it is to be an inner-city girl with dreams?

Jennifer is accustomed to this sort of behavior, which is clear from her unaffected reaction. She recites her response as if she's been through it many times before.

Jennifer: Yes To'Romisha I can never know how hard it is to be you I wish your life wasn't so hard I'm sorry do you want some pie?

Jennifer: So, have you given any thought to how you're going to enter the inner-city dance competition?

To'Romisha: No, but now that you mention it, I am kinda inclined to rehash the details of it to you.

To'Romisha: So, like, I like to dance, right, and then there's this competition, but Jessica Tejada is a bitch and tries to stop me and now I'm just an inner-city girl with dreams. [throws backpack at Jennifer]

Outside the window a rustle is heard. We don't know what it is. Suddenly out of nowhere comes Jessica Tejada, a buxom lass, somersaulting through the window and landing on her right hand. Magically and inexplicably, her wrist remains intact. She stays in this position and delivers the following line.

Jessica: I heard my name? Yeah, you suck, To'Romisha. Now watch as I snap my fingers in a Z-shaped manner. [snaps fingers of free hand in Z-shaped manner, except it doesn't really look like a Z because she's upside down and all]

To'Romisha: You bitch! [runs out of room crying as Jessica evilly laughs, then seems to magically "rewind" out the window, repeating the exact motion she used to break and enter except in reverse]

To'Romisha is pensively sitting on her stoop at dusk. Harris Jones and someone with whom he is adversely engaged square off on the street. Curiously few cars seem to pass this way. Harris whips out a microphone that is connected to nothing and starts to rap.

Harris: Yo, I'm inna city/I like to tap mad bitty/I don't want your charity/I can rap like Fitty

These somewhat clichéd expository statements continue for several more minutes. Out of nowhere comes a backbeat and some hasty string arrangements, and the viewer realizes they are supposed to think this is good. Camera angles furiously change as the rap continues, at various times revealing To'Romisha bopping her head, Harris "mad schooling" his adversary, the Posse locked in a cage beside To'Romisha dancing, and various pictures of vagrants walking the streets of the projects.

Harris:
So take off all ya clothes
Or you ain't easy, no
Bitties bitties bitties
Hos hos hos
'Cause I'm inna city!

To'Romisha: You was really good. What's yo' name?

To'Romisha: Oh, really? Cool. My name's To'Romisha. You can call me Toe.

To'Romisha: Aight, good meeting you too.

Harris walks away, and his rap unmercifully begins playing over the following scene as To'Romisha bops her head conveniently in beat. "Toe" begins break-dance/salsa-ing as the dusk turns to night. Still, no cars come down the block. Strange.

Posse: *when she finishes* Good job.

To'Romisha is seated in Principal Klondike's office. On the wall are diplomas and various other knick-knacks. It is very bland. Sitting behind the desk is Henry Klondike, with an exasperated look on his face as To'Romisha spits on the floor.

Klondike: Well, as you know, I'm Principal Klondike, and I also act as Dean of Students. That makes me responsible for disciplinary action.

Posse: Your name has the word "dike" in it.

Klondike: Astute observation. Who are these people? 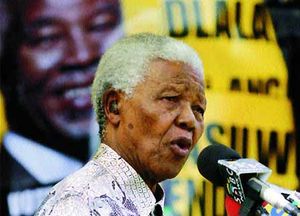 Principal Klondike: I'd wreck you. I was in Vietnam.

Klondike: [rubs his temples in frustration] Well, one of them is smoking weed and some others appear to be excessively scuffing my floor which was just shined. Ms. LaJohnson, the reason I called you down here is because it appears as if you have reached strike three. Several times.

Toe: Wanna fight about it?

Klondike: No, because I'd wreck you. I was in Vietnam.

Klondike: Yep. I was there when Saigon fell.

Posse: Yeah! [all spit on floor as well]

Toe: SHUT UP! [throws Klondike's name plaque at them]

Klondike: Young lady, I think it is time for more serious measures to be put into place. As of now, I am assigning you to the cleaning detail of the school, indefinitely.

Toe: YOU DON'T KNOW WHAT IT'S LIKE TO SUFFER! I'M JUST A GIRL IN THE PROJECTS WITH DREAMS OF A BIG FUTURE! DON'T YOU KNOW HOW MUCH THAT HURTS, MAN?

Klondike: I see. Well, when you put it that way, here's one hundred bucks. Use it to embark on your dream!

Toe: Sweet! This should be just enough to enter into the street dancing competition, yo!

Klondike: As for you all, you're expelled for vandalism. Specifically of my floor. Dismissed.

To'Romisha is dancing down the street, and all of a sudden the beat to "I'm Inna City" comes on AGAIN! It seems as if we cannot escape this banal song. Luckily, it is cut short by the sound of two gunshot reports in the distance. To'Romisha runs to them.

Jessica: Nothing, [swivels hips; puffs out lips] To-ro-mi-shaaaaa. Just shooting some skeet. What are [gyrates, does the ubiquitous "mmhmm" move, and props up her breasts] you doing here?

To'Romisha: I asked you first. [poofs out her hair] What are you doing here?

Jessica: I just [does a somersault] told you.

Both girls stop speaking and concentrate fully on out-contorting the other. Excitedly, a teenage boy yells "Catfight!" and is heard running up steps. Jessica is bent over backwards and To'Romisha is inside-out when it starts raining. The camera tilts upward to reveal the same excited teenager with a hose in his hand on the veranda of one of the projects.

Jessica: [straightening up] You sick bastard!

To'Romisha: Yeah, all I am is an inner-city girl with dreams! Why does everyone keep trying to wreck that?

To'Romisha takes out a tape recorder and presses play

Tape: [voices of the posse] YEAH!

To'Romisha: Jessica, you whore, I challenge you to a dance-off at the Street Dancing Competition.

Jessica: You don't have to challenge me, you stupid puta.

Jessica storms away. The group of boys follows her, leaving To'Romisha alone. Harris Jones comes onscreen slowly, clearly looking at To'Romisha's rack, lips pursed in a way that screams "arrest me for rape".

Harris: Heyyy, baby, I heard what happened. You aight?

To'Romisha: [collapsing into his arms] I can't take it anymore! I'm just an inner-city girl with dreams. Oh, Harris, will you rap for me at the Street Dancing Competition.

Harris: Whatever you said, as long as it's not inconvenient for me, I'll do it. Word.

Harris walks away, and To'Romisha drops in a heap onto the ground.

Immediately following the end of last scene, it begins to rain. To'Romisha is kneeling in a puddle of filthy rainwater when Jennifer is heard in the distance.

Jennifer: To'Romisha? What the hell are you doing out in the rain?

To'Romisha, ever the moody one, doesn't respond. Jennifer begins running toward her.

Jennifer: To'Romisha, get up! What the hell's the matter with you?

To'Romisha splashes water in her general direction and continues to pout. Jennifer continues her approach, and To'Romisha looks up moodily. Sappy string music begins to play and we get an inkling that something may be about to go wrong.

Jennifer: For God's sake, To'Romisha, what do you have to be sad about? Your life isn't that bad! You have a home, and both of your parents, and you had dignity! Now all you've got is a wet T-shirt! Where are your dreams? They're all gone because you're too busy wallowing in self-pity!

To'Romisha: I know you are, but what am I? 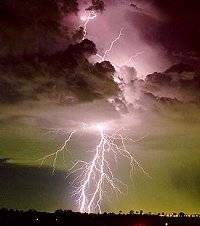 Voice: That's the last time you use my name in vain!

Jennifer: Oh, real mature, toe. And what're you doing hanging around that sell-out misogynistic freak anyway? He looks like a horse, for Christ's sake!

The strings get more sweeping and a rumbling is heard. Suddenly a voice comes from the sky.

Voice: That's the last time you use my name in vain!

Lightning strikes Jennifer a lot of times, with each one delivering a most satisfying BANG! noise. It leaves nothing but the scorched skeleton of an umbrella behind.

The sky clears and To'Romisha gets up.

To'Romisha: J-J-Jennifer? [no response] Crap, now I'm an inner-city girl with dreams AND no best friend.

Harris Jones: [walking toward To'Romisha] Heyyy, baby, I heard what happened. You aight?

They walk away into the sunset. The backbeat to "I'm Inna City" plays again. This is the sixth time. I've been using one of those little baseball counters. Anyway, the screen goes entirely white as it begins properly.

A nondescript street. Tumbleweeds uncharacteristically float past the hard concrete buildings. Jessica and To'Romisha face off on opposite sides.

Whip-pan back to Toe, Jessica, and the posse

To'Romisha: SHUT UP! [picks up tumbleweed and throws it at them]

Abruptly, the scene switches to a stretcher with a boy on it. His cheek is swollen to roughly the size of a cantaloupe. He gives To'Romisha the finger as the doors are closed by the EMT men.

To'Romisha: Aight. Where were we, Jessica? 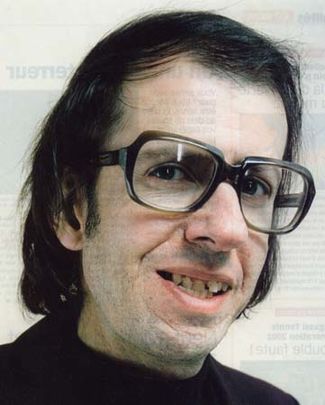 Whip-pan back to Toe, Jessica, and the posse

They dance. They are watched by a crowd of onlookers which has inexplicably appeared. Judges write on scratch pads.

Jessica: So, who wins?

Judge #2: Yeah, we have to talk and stuff. You can't expect results immediately.

To'Romisha: [quietly] This one's for you, Jennifer.

The judges perk up as if Pavlov just rang his bell. Mutterings such as "Did you hear what she said?", "Well, that's how it goes when you're in the hood...", and "I heard she's just an inner-city girl with dreams" can be heard as the judges hastily confer. They finish and stand.

Judge #2: I'm moved by this touching turn of events. Though you fell flat on your ass halfway through and totally got mad schooled by Jessica . . .

They hand her a large trophy.

She heaves the trophy toward Posse, behind which the camera is stationed. The trophy hits the camera, and the screen goes black. Roll credits.

Another rap beat begins to play as we see Harris and To'Romisha bopping their heads in beat. All of the following action takes place on the left of the screen as credits begin to roll to the right. The split is about 60-40; so playfully off-center!

Harris: I made a rap for it, wanna hear?

The credits take full prominence as Harris and his Toe's scene squishes off to the edge.


To'Romisha LaJohnson
She be my bitty now
Harris Jones be hers
And you know that I'm out
PEACE!

Featured Article  (read another featured article)
Featured version: 10 April 2008
This article has been featured on the front page. — You can nominate your favourite articles at Uncyclopedia:VFH.