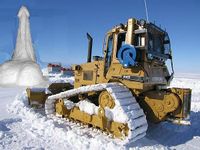 MADISON, WI - Long an enclave for the more “progressive” elements of American society, Madison, Wisconsin has also been the home, as it were, of phallic snow sculptures for the past 10 years. The “artwork” of heterosexual women and homosexual men, these snow penises have long annoyed many men and women, especially parents, who have not appreciated having the exhibits “in our kids’ faces,” as Margaret Johnson , president of Concerned Parents Anonymous, put it.

She and “over 100” other Concerned Parents are responsible for the organized protests that, after a decade, have resulted in an anti-nudity law against such snow statues, which the code describes as “the male genitals, erect or flaccid, of any human or humanoid figure of frozen precipitation in the form of white or translucent hexagonal ice crystals that fall in soft flakes.”

Critics of the ordinance (mostly gay males) believe that the term “genitals,” which, they say, includes the scrotum andtesticles as well as the penis, is “too broad” and, therefore, unconstitutional. The American Civil Liberties Union (ACLU) has agreed to represent The Snow Penis Sculptors of Madison, Wisconsin, and the World pro bono in a legal challenge to the law, which ACLU spokesman Bonnie Bum describes as “unaesthetic.”

The gay community, such as it is, in Madison has called upon its members to “stand up and be counted” by creating snow penises in their neighborhoods throughout the land. “The only problem is that, in most of the country, spring has sprung,” Nathan Alexander, president of Gays for the Degeneration and Defamation of America, told Unnews’ reporter Lotta Lies.

He also called upon “our lesbian sisters” to “put aside their Penis Envy, and give us a hand” in creating as many of the phallic snow sculptures as possible. “If the wet season has passed, think outside the box,” he suggested, using a series of metaphors calculated to appeal to lesbians, such as “wet“ and “box.” Lesbians and others, he said, could create their sculptures at ski resorts and atop snow-covered mountain peaks. Doing so could have the “added punitive effect,” he said, “of having society pay thousands of dollars to finance rescue missions for artists who get lost on mountain slopes. If that happens to you, remember to build an igloo or a snow cave along with your phallus,” he added.

Reportedly, Sean Penn, Alec Baldwin, and other male celebrities have agreed to “get naked and let it all hang out” while they participate in a “group protest” during which they will “pollute themselves” at the famous ski resort at Vail, Colorado, surrounded by a circle of gigantic snow phalli that will “gush” sastrugi, a term that skiers use to describe snow that has melted into breaking waves.

Meanwhile, in an effort to circumcise circumvent the law, Madison artists are using several of the 120 Innuit words for the white powder--snow, that is, not Penn’s stash of cocaine. Wendy Metropolis, a Chicago resident, prefers to refer to the white stuff from which she has sculpted the snow phallus on her 120-floor apartment’s balcony a “mavsa,” which means “snowdrift overhead that is about to fall.” Vince Meat, a gay sculptor calls his snow penis “anigruak,” or “frost on a living surface."

Meanwhile, despite protests and legal action on the part of their city’s ordinance against snow penises, Wisconsin police vow to ticket anyone who carves or constructs “the male genitals, erect or flaccid, of any human or humanoid figure of frozen precipitation in the form of white or translucent hexagonal ice crystals that fall in soft flakes” and are prepared to use “bulldozers to demolish oversize statues.”