17 August 2007
SALT LAKE CITY, UTAH - A certain suspension of taste is required to enter Utah, where several rules of common decency are often publicly defecated on and then handed over to the Mormon Church. However, though finding sanity in this abyss of law-abiding lawlessness is difficult, it is not impossible. This was evidenced yesterday by the happy marriage of Jonathan and Geena Warner, who recently tied the knot in Salt Lake City. "We're just so happy to be together. We've lived in Utah all our lives, and it just seemed right to marry here as well." 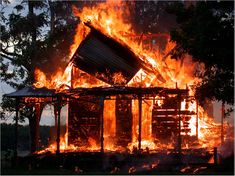 LATE EXTRA: The Warners' home (above) was destroyed yesterday in a tragic fire. Nobody was hurt, though two people were struck in the head with falling wood and are currently in critical condition. Police say it was started by an angry mob of fifty people, composed of two married families. They have been taken into custody and await questioning.

The couple, who have known each other all their lives, are looking forward to living out their married life in a tiny suburb called Provo, where they plan to have three children. "It should be lots of fun, living out the American Dream. Jon just got a job as an accountant, and we couldn't be happier." Their vaguely nauseating lovey-dovey eyes drove the reporter away before he could take any more comments from them, but Mr. Warner's excitement certainly indicated that their plans for the immediate future entailed inappropriate actions.

The neighbors were less than excited about this marriage made in heaven. When asked about it, Robert Franklinson said "Marriage made in heaven? More like marriage made in hell!" At this point he began to laugh as if it were funny, and it took the interview a while to proceed. However, when the uproarious laughter from this most mediocre of jokes died down, he said, "But seriously now, this is wrong. I mean, one spouse? What is that guy, thirteen? By his age I had already married my sixth wife. Right, honeys?" At this, Georgia, Francine, Heather, Talia, Julie, Wendy, Lindsay, and Brianne all nodded in a frightened way.

Mr. Franklinson, a relatively tame Utah denizen, was not alone in his allegations of blasphemy. Franklin Robertson, who sports twelve wives on his arms at all times, and five more when at home, said "I don't believe it's in the realm of good taste to take only one wife. Going against popular culture just because of outdated values? Ha!" Apparently a trend in Utah is to laugh obnoxiously at one's jokes, for he too embarked upon a tirade of laughter joined by his minions wives. This putoffish merrymaking had no foreseeable end, so, taking leave, the reporter for this story proceeded to query the Utah governor on the situation.

Apparently, the situation was dire. "Preparations for this situation have been virtually nonexistent in the past. We were so used to having polygamy|polygamist's weddings or monogamists marrying somewhere else!" said John M. Huntsman, Jr. (R), who is a member of the latter group. "I personally was married in Colorado before crossing the state line to become governor here." He went on to explain the history of Utah's polygamy, which involved three gay Mormons, extreme intoxication, and the lax marriage laws of neighboring state Nevada. It was altogether uninteresting and doesn't merit printing.

However, an interesting turn of events came when he mentioned its adverse effect on the state's economy. He detailed a catastrophic recession similar to the recent downturn of New York's Wall Street. "You see, we usually depend on the lavish proceedings of multiple-spouse weddings to get by. When you consider the expenses of a monogamist wedding, imagine that times ten (or, more likely, fifteen or twenty), and you have a rough estimate of what we take in every weekend from April to September. And imagine the anniversaries, ugh!" Apparently, the repercussions are more massive than one would think, as at this point the governor began sobbing uncontrollably. His assistant explained it in more detail.

"It's not just this one that's the problem. If we start getting a reputation as 'A Normal Place to Marry', we could be in for real trouble! We could end up like Death Valley…in Utah! We have no exports, we are perhaps the least lucrative state in the Union, (Hawaii notwithstanding). We depend solely on our own means to garner income. Therefore, if this 'normal marriage' thing becomes common, we are doomed." Well said indeed, sir. As he nursed the governor back to coherency, he made one more, perhaps clairvoyant, statement. Said he, "What is this world coming to?"

Featured Article  (read another featured article)
Featured version: 24 August 2007
This article has been featured on the front page. — You can nominate your favourite articles at Uncyclopedia:VFH.