UnNews:Mike Pence turns into a pickle 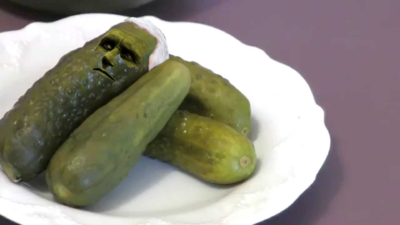 "I don't even like pickles!" the corrupt former Vice President protested.

COLUMBUS, Indiana -- Psycho Christian white supremacist former Vice President Mike Pence has gotten himself into another pickle. Only this time, it's quite literally a pickle. The former VP discovered that he had turned into a former cucumber.

"No explanation at all," Pence told Newsmax Tuesday. "I just woke up one day and discovered I had turned into a pickle. I know the European Union turned President Trump into a walrus, and former Press Secretary... What was that bastard's name again?... into an eggman, but I believe they wouldn't waste their time on me. I believe it was Hillary Clinton, Obama, The Bidens, the Kennedys, The Addams Family, Rosie O'Donnell, Britney Spears, Oprah, Steve Harvey and those goddamned liberal Democrats who stole the election from me-- I mean, us!"

There is zero evidence of any of these parties being involved in the incident.

"Mother is going to be ashamed of me. She warned me about sticking my pickle where it didn't belong."

To make matters worse, Dan Harmon has filed a cease-and-desist against Pence.

Twitter erupted in the wake of the news. Donald Trump tweeted: "I know for a terrific 100 percent FACT that LEBROWN JAMES is rebonsisple for this. NFL should suspend him. GO BACK TO YOUR SHITHOLE COUNTRY!" Then Trump remembered that he was banned in January.

Mel Brooks: "May the Schwartz be with you #Maythe4thBeWithYou #StarWarsDay #Spaceballs"

Rep. Joe Neguse (D-CO, District 2): "You lost the election #DealWithIt, but you win the internet. 🏆"

President Biden and Vice President Kamala Harris have yet to comment, but Jimmy Carter lamented that "I'm disappointed he wasn't turned into a peanut."

Featured Article  (read another featured article)
Featured version: 14 May 2021
This article has been featured on the front page. — You can nominate your favourite articles at Uncyclopedia:VFH.