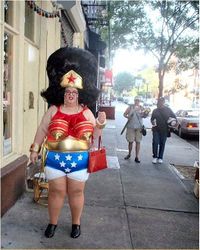 HOLLYWOOD, CA - Joss Whedon, creator of Buffy the Vampire Slayer, has announced his pick for the star of Wonder Woman, the script of which he has just finished writing, and his choice isn't Lindsay Lohan, Katie Holmes, Cameron Diaz, Mischa Barton, Charisma Carpenter, or Sarah Michelle Gellar--it's Rosie O'Donnell!

Once he decided on a fat lesbian as Wonder Woman, Whedon declared, "Rosie O'Donnell was a natural--the only--choice."

O'Donnell's past acting credits are meager. She played Wilma Flintstone in The Flinstones and a heterosexual version of herself on The Rosie O'Donnell Show. She has also played various lesbian characters in such TV shows as Nip/Tuck and Queer As Folk, and she plays a homosexual version of herself on The View. With a few other, less notable TV appearances to her credit, O'Donnell is "pretty much what I'd call a cinematographic virgin," Whedon admits, "but that's what I wanted for Wonder Woman."

O'Donnell is reportedly "ecstatic" at the opportunity to play another fat lesbian character. "I've always loved Wonder Woman," she admits. "I dreamed of her for years, all during my adolescence. She was my dream girl. And now, thanks to Joss, I get to play her!" Wait 'til you see what I do with her golden lariat and her invisible airplane!

Whedon agrees that his choice is unusual, but, he adds, "DC Comics wanted me to update the character, and I've chosen to take Princess Diana--Wonder Woman--in a new direction. As an Amazon, she lives in an all-girl--or all-woman--society, so, obviously, she's gay. I wanted Buffy to be gay, but Sarah [Michelle Gellar] balked, although she was willing enough to lock lips with Selma Blair in Crude Intentions. I had to settle for Willow's lesbianism, which was nice, except that Willow was only a supporting character, mot the show's main character. Now, since Rosie is a butch dyke, I can, at last, have a lesbian protagonist."

The film, the release of which is already overdue, has been postponed until O'Donnell completes her current commitment as the moderator of The View and is available to play Wonder Woman, "but the wait," Whedon assured Mason, "will be well worth it. Just wait until you see what she does with her golden lariat and her invisible airplane!"

The film is expected to be released in 2008, "if Rosie will get off her fat ass," Whedon said.