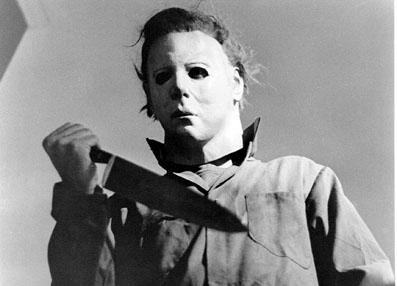 The new Carpenter-produced Blumhouse Halloween will return to the roots of the 1978 original.

HADDONFIELD, Illinois -- Last anyone heard about the Halloween horror movie franchise, the Weinsteins lost the rights. And now we're happy to report that Trancas International Films' Malek Akkad and Miramax have taken Michael Myers to Blumhouse -- best known for micro-budget slow-burners such as Insidious, Sinister, and The Purge. But wait, there's more. I hope you're sitting down, dude!

In a move so surprising and unexpected that one might mistake it for an April Fool's joke or an UnNews article (I didn't believe it at first, either), John Carpenter will be returning to the Halloween franchise to executive-produce the next installment, planned for an October 2017 release. Carpenter is also in negotiations to compose the score, not that they're not gonna use the "Duh-nuh-nuh, Duh-nuh-nuh, Duh-nuh. Duh-nuh" theme music for the six thousandth time. 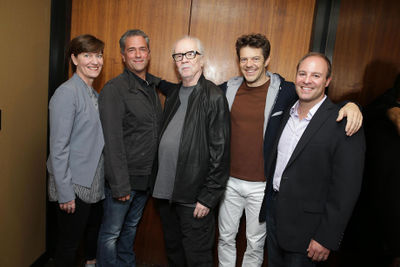 But why is Carpenter returning?

"The reasons are these," he says: "Rob Zombie fucked everything up royally. He turned Halloween into something it wasn't. Each film since Halloween II (which Rick Rosenthal directed, not Rob's Halloween II) has gradually gone astray from what I had intended, and I wanted to steer Halloween into the right direction. And... the money. Definitely the money. But for the first time since the [1978] original, I have a passion for Halloween again; I'm ready to return. That being said, I can't wait to drive around in the car this film's gonna buy me."

Unlike Rob Zombie's white-trash reboot (which I have come to like less and less with the passing of time) and its trainwreck of a sequel (which I've always hated), the Blumhouse/Carpenter Halloween promises to return to the roots of the original. It will treat Michael Myers as The Shape he was in the original.

"Michael Myers is not a character," Carpenter says. "He's a force. (Don't sue me, George Lucas.) He's like a ghost, an element. He's the air. He's Death Itself. Purely and simply evil. I want to return to that."

Whether the film will be a remake, reboot, sequel, or prequel hasn't been decided yet. "It'll be a movie," Carpenter says, "and it'll make me money."

This is Carpenter's first involvement since he sold his rights in 1984. He was approached to direct Halloween H20: Twenty Years Later, but Moustapha Akkad refused to pay him his $10 million directing fee, so they went with Steve Miner (Friday the 13th Parts 2 and 3; Lake Placid).

Speaking of Friday the 13th, Carpenter is not a fan. "They only made those movies to rip off Halloween and make money. I could do that in my sleep. Only I do it with class instead of gore."

This is planned to be the first October release for a Halloween movie since 1995's Halloween: The Curse of Michael Myers. Everything since has been released in the summer, particularly August.

The franchise has been in tatters ever since Halloween: Resurrection. You might remember that one: Busta Rhymes and Tyra Banks have this production company called DangerTainment and they put together an ill-conceived reality show at the Myers House with a bunch of college kids -- none of whom have any business at the Myers house. Surely you remember Busta Rhymes karate-chopping Michael Myers? Or such terrible lines as "Trick or treat, motherfucker" or "Michael Myers is not a sound bite, a spin-off, a tie-in, some kind of celebrity scandal. Michael Myers is a killer shark in baggy-ass overalls that gets his kicks off of killing everything and everyone that he comes across. That's all. We're done dancing for these cameras" or "You're looking a little crispy over there, Mikey. Like some chicken-fried motherfucker. Well, may he never, ever rest in peace." The less said about Resurrection, the better.

In retrospect, getting Rob Zombie to remake Halloween was, for the most part, a mistake. The Runaways aside, Scout-Taylor Compton (who took over as Jamie Lee Curtis's Laurie Strode) is a C-list actress, at best. The writing could have been a lot better -- especially the third act, which is the actual remake portion of the film. Lines of dialogue such as "Bitch, I'm gonna crawl over there and I'm gonna skull-fuck the shit outta you!!" could've been scrapped. Lots of terrible dialogue that I didn't like, even then. I was just happy we got a Halloween film for the first time since Resurrection; it may not have been that good, but it was a film, and that's all that mattered.

The film did get a few things right, however. Even though we didn't actually need to see Michael Myers's backstory, Daeg Faerch and Malcolm McDowell did good jobs considering the hit-and-miss material they were working with. Brad Dourif was pretty decent as Sheriff Brackett. The cinematography, the score, the soundtrack, and the mask were all good. It's the best the mask had looked since Halloween II (1981), which was the same as the original mask, but had deteriorated due to poor preservation. Wayne Toth did a commendable job of recreating the original mask, which he then Rob Zombie'd up.

Rob's Halloween II sequel was an out-and-out disaster from the get-go, a total trainwreck. Fans, critics, and audiences hated it. The film's Uncyclopedia article gives you a pretty accurate breakdown of everything wrong with the movie, probably more accurate than its Wikipedia counterpart. I'm not going to recount everything here. I'm glad that John Carpenter is back to clean up the mess left behind in the Weinsteins' and Rob Zombie's wake.

For more fake news on this topic, read:
Weinsteins lose rights to Halloween

For more fake news on this topic, read:
How the Halloween franchise can dig itself out of its hole

For more fake news on this topic, read:
Carpenter buys back rights to "Halloween"

For more fake news on this topic, read:
Weinsteins: "We are fucked!"