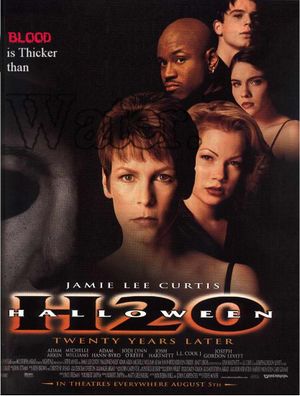 Halloween H20: Twenty Years Later (a.k.a. Halloween H20: 20 Years Later or simply, Halloween: H20) was the twentieth-anniversary sequel to the 1978 horror classic, Halloween. The film was the first since Halloween II to star Jamie Lee Curtis as Laurie Strode; she had decided not to reprise her role in any future Halloweens, or appear in any more horror films, for that matter.

John Carpenter was originally supposed to direct, but his fee at the time was $10 million, which would have left the film with a paltry $7 million budget. Moustapha Akkad turned down Carpenter. Because of this, the film was directed by Steve Miner -- who, ironically, directed the second and third Friday the 13th movies. Also ironic, Miner asked for $20 million, which he never got.

The film disregards the events of the non-Curtis sequels and quietly sweeps them under the rug. There were several reasons for this. The producers felt that there would be too much baggage from these films, the last two of which flopped anyway. Halloween 5: The Revenge of Michael Myers is still the lowest-grossing Halloween film to date.

Halloween H20 was heavily influenced by the 1996 horror hit, Scream, and its ilk, including 1997's I Know What You Did Last Summer. It has similar editing, music, and the casting of actors from teen dramas on The WB. Ironically, Scream, itself, was inspired by the original Halloween.

Released in 1998, Halloween H20 became the highest grossing Halloween since the original, and received some of the best reviews of any Halloween sequel.

For those obsessed with so-called-experts, Wikipedia has an article about:
Halloween H20: 20 Years Later.

On his way to a Wal-Mart in California, he runs into Nurse Marion Chambers, who worked with Dr. Loomis in the first two films. (Donald Pleasence, who played Loomis, died in 1995, and is thus not in the film. However, Tom Kane impersonated his voice and re-recorded the classic Devil's Eyes speech from the original. Kane is best known as The Professor and the narrator from The Powerpuff Girls.)

Michael then forgets about the water and decides to renew his hunt for Laurie. He plunders a box of old photos and information about her whereabouts. He kills Marion and also, Joseph Gordon-Levitt wearing hockey gear. This is the closest we've ever gotten to Michael vs. Jason.

In Glendale, California (a long ways from Haddonfield, Illinois!), we meet a woman who turns out to be Laurie Strode, now going under the assumed name Keri Tate. Laurie/Keri faked her death, moved to California, changed her name so that Michael couldn't find her again, and became a PTSD-suffering headmaster at a boarding school. While in California, she had a son and named him John Tate. She's also sort of in a relationship with Will (Adam Arkin).

Michael Myers somehow finds her and stalks the school grounds. The students leave for a Halloween party, hoping to get drunk and party like they're in Tijuana. John and a few friends have their own Halloween party in the basement. Classmate Charlie is killed by Michael Myers. When his girlfriend, Sarah (Jodi Lyn O'Keefe), goes looking for him, she finds his body in the kitchen dumbwaiter with a corkscrew embedded in his throat, and then Michael appears. She manages to get into the dumbwaiter next to Charlie and just as she closes the door Michael painfully stabs her in the leg. The dumbwaiter heads down a level and as Sarah gets out Michael slashes a rope, causing the dumbwaiter to fall down heavily onto Sarah's leg, savagely disfiguring it. As she attempts to crawl for help Michael stabs her repeatedly, killing her.

Reunited and it feels so good.

John and his girlfriend Molly investigate. They find Sarah's body hanged in the pantry and are chased by Michael through the school grounds. At one point in the chase, John is stabbed in the leg. Just as Michael is about to get Molly and John, they are saved by Laurie and Will, who open the door for them just in time. Just as the door closes behind them, Laurie and Michael come face to face for the first time since their last encounter 20 years earlier. Michael Myers holds up a sign reading "Water, please" and pins it to the door with his knife. And this sets everything in motion.

Their cat-and-mous chase eventually leads them to a local Wal-Mart, where Michael finally finds some water. Michael kills quite a few people who are holding up the checkout line, but when he tries to kill Laurie in an epic showdown, Laurie chops his head off and it flies toward the camera and breaks the lense. Roll credits.

Nick Castle almost reprised the part of Michael Myers after finding out that John Carpenter was doing it. "I will only do a Halloween film if Carpenter is directing it," he said at the time. This was the first Halloween since Halloween II to feature the nurse, and the first not to feature Dr. Loomis, except in a pre-existing monologue during the closing credits. 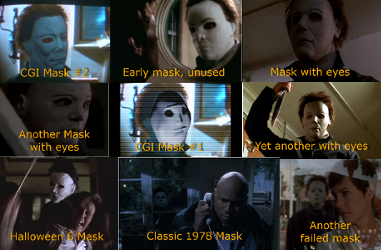 A gallery of masks created for Halloween H20, some of them unused.

Producers struggled to find a direction to take the franchise after Halloween 6 disappointed at the box office. Not only that, but the 20th anniversary of the original film was fast approaching. Kevin Williamson actually wrote references to Halloweens 3-6 into his original script, but it was ultimately decided to keep it simple.

"We decided to go with a more straightforward, back-to-basic film," says Malek Akkad. "Like Halloween 4. We didn't want the audience to walk out of the theater confused, as was the case with Halloween 6. Unless we're talking about the Producer's Cut... which we're not."

John Ottman's original score was tampered with. The Weinsteins rejected it and replaced it with Marco Beltrami's score from Scream. In one instance, Michael chases Laurie in the third act. Instead of an orchestral version of John Carpenter's score, as Ottman had intended, the Weinsteins inserted "Nyick, Nyick" and fart-sounding music similar to the teen slashers that were trendy in the 90s.

And don't get me started on the masks. They had approximately nine different masks during the entire production. Two of them were CGI. Many of them made Michael's eyes visible, a pet peeve of many fans. Even though they don't seem to mind it in Halloween II.

"The deal was that we didn't want to go through Don Post's estate to get the rights to the original Shape mask," says Akkad. "It was too expensive, and we wanted to piss the fans off. So we deliberately made the mask look nothing like the previous masks. Wanted to give them one thing, one thing, to bitch about, and leave most everything else alone."

Another excuse is that the killer in the film was originally supposed to be a Michael Myers copycat, not the real thing. "We said, eh, do whatever you want with it."

After a test screening -- the event that often makes or breaks a horror film -- they were forced to change the mask.

Williamson and Steve Miner also made the brave choice of giving the film a definite ending. They had Laurie behead Michael, even though it was contractually stipulated that the Halloween 8 writer retcon this.