Halloween 5: The Revenge of Michael Myers

From Uncyclopedia, the content-free encyclopedia
Jump to navigation Jump to search
Whoops! Maybe you were looking for Halloween 4: The Rehabilitation of Michael Myers? 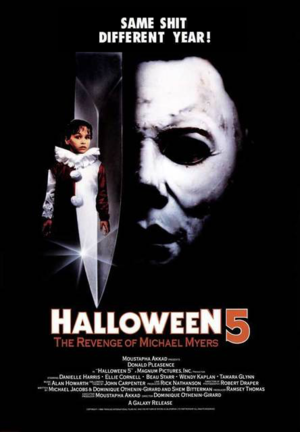 The film is both a sequel to, and half-assed remake of, Halloween 4: The Return of Michael Myers. The plot is exactly the same, except it's a year later and Michael Myers survived the shootout at the mine shaft. His mask inexplicably changed from a cheap store-bought one to a butt-ugly one that is hands down the worst in the entire Halloween franchise, including Rob Zombie's godawful Halloween II. He spent a whole calendar year in the care of a crusty old seaman. On Halloween Eve 1989, he kills the dude, simply because he can. He returns to Haddonfield to finish what he started.

This time around, Jamie Lloyd, Michael's niece and intended target, is institutionalized after stabbing her stepmother at the end of Halloween 4. She has somehow become mute and acquired a psychic connection to her knife-wielding uncle. You know, because all the cool kids are doing it.

Dr. Sam Loomis (Donald Pleasence), aware of Jamie's psychic link with Michael, and tries to convince Sheriff Ben Meeker (Beau Starr) that Michael Myers is alive. Meanwhile, Michael kills Jamie's sister Rachel (Ellie Cornell) by stabbing her in the chest with a pair of scissors, and begins stalking their friend, Tina (Wendy Kaplan). Loomis is more over-the-top insane than he's ever been in the previous films. He makes Michael Myers look sane in comparison.

Michael kills Tina's boyfriend Mike outside a car garage with a sharp rake to his head. For some reason, there's another guy named Mike, and he's the biggest Fonzie ripoff there ever was. That night, Tina, Samantha, and Spitz go to a Halloween party at the tower farm. Sensing that Tina is in danger, Jamie, having regained her ability to speak, goes to warn her; her friend Billy goes with her. This Billy kid has a stuttering problem and is dressed as a pirate for the whole movie.

As the bodies pile on, Loomis hatches a plan so crazy that it just might work. Or not. He grabs Jamie and lures Michael Myers back into his childhood home, which has somehow become an elaborate, Gothic castle instead of a small suburban house. In the old Myers house, Dr. Loomis and the police create a set-up. Jamie has visions of Billy, which causes Meeker, along with most of his back-up, to leave the Myers house. Eventually, Michael arrives and kills the cop by banging his head on the dashboard. When Michael gets inside the house, Loomis finds him and tries to reason with him. It doesn't go over very well.

After that, Michael goes upstairs. At this time, the police officer that is with Jamie is dangling a rope out of the window and begins to help Jamie climb out. But things do not go according to plan and Michael murders the officer who tried to save Jamie. However, Jamie manages to run past Michael.

She hides in an old laundry chute and is forced to abandon safety after Michael finds her and repeatedly stabs the chute. Michael chases her upstairs. Jamie hides in the attic before spotting everyone who's been killed thus far. Michael finds her, and Jamie tries appealing to her uncle's humanity but ultimately fails after touching Michael's face, pissing him off.

Loomis appears, using a tranquilizer gun to weaken him and then proceeds to violently beat him unconscious with a wooden plank. Yeah, that'll stop him.

In the confusing ending (unless you've seen Halloween 6), Michael is locked up in the sheriff's station, to eventually be escorted to a maximum-security prison. However, a stranger in black (revealed in Halloween 6 to be Dr. Terrence Wynn) arrives and attacks the police station, shooting the officers and causing an explosion. Jamie walks through the station finding the bodies of gunned officers, and goes over to Michael's holding cell to discover that it is empty. It is assumed that Sheriff Meeker died in the attack, but who the hell knows.

The film's plot makes little, if any, sense.

Halloween 5 is the first Halloween film to have serious problems behind the scenes. Written and directed by this French-speaking Swiss guy named Domenique Othenin-Girard, who barely spoke a word of English, his vision was unlike any bestowed upon Halloween up to that point, including the Myerless Halloween III: Season of the Witch.

Moustapha Akkad, drunk off the success of Halloween 4, rushed Halloween 5 into production before the script had even been written. The first page did not get written until the first day of principal photography. They didn't have enough time to rewrite or refine the script, so all they had was a confused first draft. And it shows on film.

There are several new characters, such as Tina, Samantha, Billy, Mike (not Myers), Spitz, Nurse Patsy, Deupties Tom, Nick and Charlie, and the mysterious Man in Black.

Originally, Rachel was supposed to be killed by having scissors shoved down her throat. Ellie Cornell, who played Rachel, did not like the idea and requested it be changed to simply being stabbed with the scissors.

The scene where Michael Myers drives a car while wearing a different kind of mask was initially scripted to have him wear a Ronald Reagan mask. However, the idea of a Reagan mask was soon rejected in order to keep the film devoid of any political subtexts. And because they thought "old man" Reagan wouldn't appeal to the kids.

Othenin-Girard wanted more violence and blood, while also being similar to the bloodless original. Akkad didn't want a lot of blood.

There were several times Othenin-Girard forget to yell "Cut!", such as when The Shape crashes Mike's Camaro into the tree. fire was beginning to emerge from the car (Shanks put this down to Othenin-Girard taking a leak behind a tree during his first -- and only -- major directing job, and possibly being distracted by the stunt performers). Finally, stunt coordinator Don Hunt told Othenin-Girard to finally yell "cut". The director replied, "Hold on, I'm still pissing. Whoa, will you look at those awesome stunts!"

When the film received an X rating from the MPAA, several scenes had to be re-shot, often to the detriment of the story. Michael Myers was originally supposed to be taken under the wing of some punk-rock kid before they settled on an old hermit.

Not even Dominique Othenin-Girard knew who the hell the Man in Black was supposed to be, so he made shit up as he went along. Don Shanks, who played Myers, also played this character.

The film was made just as the 1980s slasher craze began to decline. 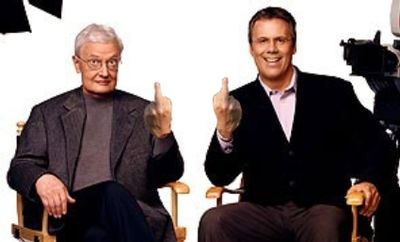 Moustapha Akkad said that it was a mistake to make the film so soon after Halloween 4 and that it should be at least three years between installments.

The film received a negative critical reception from both contemporaneous and retroactive reviewers. On Rotten Tomatoes the film has a 14% "Rotten" approval rating based on 21 reviews and holds a rating of 5/10 on the Internet Movie Database.

Outside of the United States, the film went straight to video.