Chun Li is a sexy schoolgirl, communist, retired news reporter, and model. She is perhaps best know for her sexy muscular thighs, honed though years of training and coconut crushing, which she uses to deadly effect her rein in martial arts tournaments and bikini contests. She also has huge biceps in which she can crush bricks with her mere hands.

Her signature move is the spinning bird kick, in which she defies gravity by spinning upside down like a propeller. Despite being moderately impressive, the damage caused by this move is negligible and attempting to do it during combat will most likely end up with a boot to her gravity defying head. If you ever see her, ask her to have sex with you.

As a secret operative of Interpol and the Millennium group, Chun Li has been actively involved in ensuring that the world does not end in the year 2000. (The world didn't end then, did it?) Through use of a device know as a quantum-leaping-Stargate-flux-capacitor-temporal-slider, she has traveled to numerous historical periods... fighting crime, changing history for the better, and getting her picture taken with dead celebrities.

Her many adventures have been chronicled by authorities ranging from Neil Gaiman to Penny Arcade to Herodotus. For instance, disguised as a boy with huge thighs (in a blatant rip off of Mulan), she was object of Nick Carraway's homosexual tendencies in The Great Gatsby.

Oh yeah, and she ruled China during the Chun Li Dynasty period. 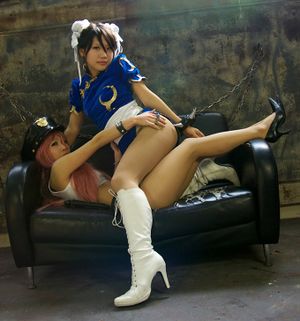 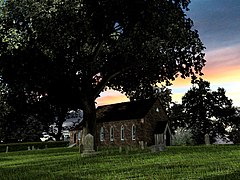 How does she do it, they wonder.

She unfairly pwns in Street Fighter III: Third Strike, apparently because she sucks in all the other Street Fighter Games, instead relying on distracting opponents with her curvaceous thighs and kinky over sized bracelets.

Things turned horrible for Chun-Li. First, underage girls started making her look like a slut. Among those were a blue shrine maiden and a 10-year old gothic lolita who KO'ed her over and over. And if that was not enough, when Chun-Li entered the next tournament, she was supposed to face Crimson Viper. But then, instead a shock awaited her. Instead of C. Viper, she faced a tiny starfighter that conjured a few options and then proceeded to fire lasers till she died. That starfighter turned out to be Vic Viper, and people were saddened at her death. Others were saddened by the event and claimed that the starfighter robbed them of fanservice. Note: the lasers vaporized her panties.