UnBooks:Why won't the taco go away?

Why won't the taco go away? Why does it plague me so?! It's been there ever since I went to that Mexican restaurant when I was eight, and it's just always there, always plaguing me, creeping into everything I do. They blame me for it, but I did not ask for this, oh no. I would get rid of it if I could...or would I? Tacos are yummy. Usually. When you get a chance to eat them. But when they're busy following you around and doing their best to make your life miserable, you don't get to eat them. You spend your time wondering if they'll eat you.

Everything I say and do seems to have tacos in it. When I blocked someone the other day, I started out giving a real reason, but then there was a taco...and it was not relevant in the slightest. And if it doesn't have tacos, it's got muffins or hams or something. Fanged muffins and hams. This is all that taco's doing, I'm telling you. I never put them there. They seem to think I put them there, but they do not understand. They may never understand. They'll probably desysop me because the tacos and things are 'disruptive'. Disruptive? Quite possibly, but has no one ever tried eating them? Surely they cannot be all bad. That is why I have been waiting for them to go away on their own, because if I force them away, perhaps I will miss the great truth of their mission. They've been awfully persistent. So far, however, I have encountered no such great truth, only realised that what I do just isn't fun any more. It's just...tacos, now. 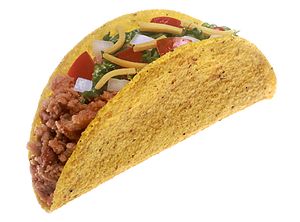 It may look like just a piece of food, but it speaks to me. Can you see its face? Are you looking hard enough?

As I was going to eat the taco, it spoke to me, saying 'Do not eat me. I have something important to tell you.'

So I did not eat it. I refrained from asking what it wanted to tell me, as I couldn't be sure if it had just been my imagination. When questioned on my refusal to eat the taco, I explained that I didn't like tacos, though I wondered if that would offend it.

I gave no further thought to this incident until many years later, after I had discovered Uncyclopedia and been yoinked and sqlorshed against my will into becoming an administrator. One day, I found that I just couldn't stop thinking about tacos. Tacos running all over the place, pushing out everything that was supposed to be there, as well as everything that wasn't. I figured it had something to do with that talking taco in the Mexican restaurant, but I didn't have the slightest idea what. And for the first time, I asked myself that awful question that would come to haunt me: Why won't the taco go away?

The novel, Why won't the taco go away? is also available in paperback.

They've desysopped me at this point. There was a vote in the village dump, and everyone, even those I had thought were my friends, who had supported me in the past, turned against me and called out for me to be burnt at the stake. I never even did anything terribly wrong. Perhaps I deleted a bunch of things with strange summaries involving singing muffins, but I thought everyone knew what that meant; perhaps I blocked a few of our best writers for no other reason than that they had invoked the wrath of the taco, but their coding skills were simply awful and messed up the main page, and that would not do at all.

What's more, they did not only desysop me. They sent tacos to torture me, evil tacos. The kind the Wikipedians use to frighten blocked users into submission and, failing that, to make cereal. I was terribly afraid they would eat me alive, as I could not run from them, for they had wings and could probably teleport too. But then my taco chased them away into the depths of the fiery lake, and saved my life. Not that my life was anything more than symbolic at this point, since the Uncyclopedians had conspired to destroy what had previously given it meaning, but still, it meant a lot to me.

Then I found the great truth of the taco's mission, and saw that I had been wrong. It was not here to torment me and drive me mad. It was here to protect me, to lead me away from temptation and false gods and show me the one true path to enlightenment. No one else would ever listen, I thought; but it told me, in its infinite wisdom, that this too was for the best, for if all of humanity were to follow me on this path, the inferior ones would spread their filth over it. Only I and those who would eventually follow me were truly deserving.