From Uncyclopedia, the content-free encyclopedia
Jump to navigation Jump to search
“Get your kicks on Route 66! ♪”

Route 66 also known as the Mother Road, the Mistor Rogers Highway or Main Street of America was a road established on Veterans Day 1926 by the US Dept. of Transportation. Known for being the most famous goddamn highway in the world or maybe even the Universe, US 66 is the ultimate road trip for anyone... including you.

“It winds from Chicago to LA, More than two thousand miles all the way. Get your kicks on Route sixty-six.

Shortly after World War I, the US realized there was a need for civilian and defense routes. USDOT devised a network comprised of various routes arranged in a grid. They included 11 baseline north-south routes (1, 11, 21, 31, 41, 51, 61, 71, 81, 91, 101) from east to west and nine baseline east-west routes (10, 20, 30, 40, 50, 60, 70, 80, and 90). Some of these baselines were diagonal rather than straight N/S or E/W while others only traveled partway across the country. Route 60 was one of them. After the governor of Kentucky realized his state was the only one in the Mississippee river valley NOT to have a primary E/W corridor, so he suggested 60 be routed to Vagina Nude Beach (VNB) instead of Chicago and fork off from the original plan in Springfield. This divided the country and almost started a second Civil War but was resolved when the governor of Missouri (who was impartial to which was chosen since both would run through his state, albeit on different routes) suggested a coin toss. The winner would get US 60 while the loser would get an auxiliary route.

The coin was tossed and the Chicago-LA supporters lost. Route 60 was planned to have seven auxiliary routes: 160, 260, 360, 460, 560, 660, and 760. Route 160 extended from Morro Bay to Barstow then went to Las Vegas and then to Kingman. 260 provided a spur route to the Four Corners (Utah/Colorado/Arizona/NM). 360 went from Albuquerque to Amarillo via El Paso. 460 went from Oklahoma City to Fort Smith, Arkansas. 560 looped from 60 going from Oklahoma City to Joplin via a small town called South Haven, 660 went from Springfield to Chicago -- the consequence of the coin toss loss -- and 760 looped from 60 from Frankfort to VNB via Richmond. Chicago supporters were angry and threatened to secede. The US government threatened to change 60 to 66 and all its auxiliaries would follow suit, resulting in Chicago getting 666, the Number of the Beast. In retaliation, they ordered 660 to be changed to 66 in order to stop themselves from getting the Satanic number. The US government gave into them even more and extended 66 all the way to LA, truncating 60 to the area between Springfield and VNB. Shortly afterwards, 60 was rerouted onto 760 and the old route was renumbered 460. The original 160 through 560 were renumbered 466, 566, 366, 166, and 266 respectively, primarily to confuse people. After all this was settled (along with three new Route 60 auxiliaries and a parallel extension of said route to Los Angeles), the route network was approved almost eight years after initial plans were made -- right on Veterans Day, 1926.

This section of the article is sponsored by Prozac. During the Big Time of Epic Sadness, more familiarly known as the Great Depression, a storm of dust consumed the middle of the nation. When people fled, they were given the advice to "Get Your Kicks on Route 66" -- i.e. It leads to frickin' jobs!!! The Joad family and many others took the route and went west -- primarily because of America's stinkin' Manifest Destiny, so few people went to Chicago where more jobs were available as bear hunters. As a result, the Chicago government was forced to domesticate the bears and teach them football while many in LA and other places in CA were struggling for hard cash.

The Grapes of Wrath popularized the use of 66 as an escape route, and it also inspired the Yellow Brick Road in the 1939 film The Wizard of Oz.

As a result of the success of the Wizard of Oz, 66 was planned to be paved with yellow bricks for its entire alignment. The attack on Pearl Harbor on 12/7/1941 resulted in a loss of the popularity of the color yellow (due to association with Asians, especially the Axis Power who happened to be Asian) and also postponed reconstruction of the route. A new 566 was commissioned from Chicago to Kansas City, resulting in the original 566 being redesignated 666. 66 also connected many American internment camps in California and Arizona, leading the deported Asian-Americans who were mistakenly associated with the Axis Powers to associate 66 with demons. (It still is called Autopista de los Diablos in some parts of the nation)

In 1945, the plans to repave 66 in bricks resumed due to the end of the war... but only for a short time due to the Cold War beginning. This, however DID prompt a new Interstate system. In the plan, I-10 would replace it in LA, I-15 would replace it from LA to Barstow, Interstate 40 from Barstow to Oklahoma City, Interstate 44 from Oklahoma City to St. Louis, and Interstate 55 from St. Louis to Chicago. Other US Routes were also being replaced by Interstates in this plan. Many protested to make the combined corridor "I-66" instead, but the US government did NOT want to repeat the same incident all over again having to reroute I-40 to allow both it and 66 to be transcontinental. They did, however, create a new I-66 from Staunton, Virginia to Washington, DC following US 50. 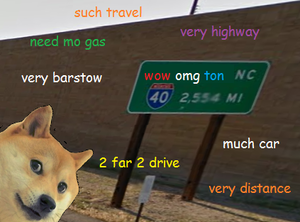 Gradually, many states began removing signs from the route and sold them on eBay for roadgeeks to collect. One individual bought 66 Route 66 signs! Jeez, talk about OCD. The route was officially removed from federal documents on June 26, 1985. However, it lives on in memory, pop culture, and this article.