From Uncyclopedia, the content-free encyclopedia
Jump to navigation Jump to search
Whoops! Maybe you were looking for Roberto Carlos? 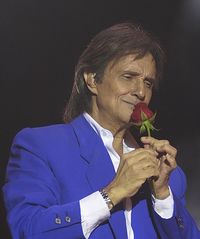 He has only one leg.

For those without comedic tastes, the so-called experts at Wikipedia have an article about Roberto Carlos Braga.

Roberto Carlos Braga (born April 19, 1941), usually known simply as Roberto Carlos, is a Brazilian singer, lefty, and widower who, among other things, has OCD. His obsessions, apparently, are: sex, religion, the colors blue and white, his dearly departed third wife, Maria Rita.

But, before all this, he was something of a player. Unfortunately, almost anyone who ever had sex with him eventually died some horrible, cancerous death. Read on, so you can be warned.

~ Roberto Carlos on missing his mom. Nobody cared.

Roberto Carlos was born 19 April 1941, in a random little town, in a little house, on the top of a hill. And one day when he was six years old, being as stupid as any male, he somehow got in the way of an oncoming steam locomotive,[1] got ran over, and had his right leg chopped off. From then until the age of fifteen, he basically hopped from place to place with the aid of crutches. He has since then used a prosthesis, but nobody cares, really.

At the age of nine, he did his first performance on the radio, in a contest for children. (First prize was a fistful of candy.) Not surprisingly, every girl under the age of ten (including Simone Bittencourt de Oliveira, one year old at the time) became wet. And then all those girls were like, "Mommy? Why am I wet?"

His mom was called "Lady Laura" because her name was, you guessed it, Laura. Roberto Carlos loved his mom. He loved her so much, that he wrote a song about her. Naturally, it was called Lady Laura. Unfortunately, she died 17 April 2010, aged 96, two days before her son became...69. Worst. Birthday. Ever.

Not much is known about his father. What is known is that his name was Robertino Braga (how redundant, but it's true), and he was a watchmaker, born in 1896 and died in 1980. Roberto also made a song about him, it's called Meu querido, meu velho, meu amigo (My dear old man, my friend).

Believe it or not, Roberto Carlos has (or had) three older siblings: two unimaginatively named brothers, Lauro Roberto (born 1932) and Carlos Alberto (born 1933); and a sister, Norma (born 1935), whom he called Norminha. No one seems to know if any of them are still alive, but nobody cares.

He started out in 1959, when he was 17 years old, and was basically the Justin Bieber of his time, except that unlike Justin Bieber, His Royal Sexiness was actually cute, actually male, and actually had talent.[2] Anyway, he did some really cool albums, and it makes you want to dance, no? Some fairly awesome songs from those years included "Quero que vá tudo pro inferno" (I want everything to go to hell), which was in 1965, and it was about being lonely, and not caring about anything else, but just because of the word "inferno" (hell), he no longer does it live (as I said before, he has OCD). Another awesome song: "Ilegal, imoral, ou engorda" (Illegal, immoral, or fattening). This song is about....doing "stuff that I don't want to do" and eating "stuff that I'm not supposed to eat." Funny, isn't it?

From, like, 1965 to, like, 1971, there was a TV show called "Jovem guarda", featuring Roberto, his bestest friend Erasmo (see below), and their mutual ex-girlfriend Wanderléa Salim. In 1966, Roberto Carlos was "crowned" Rei da juventude (king of youth). By his mom. It was obviously a joke, but just try to tell that to the really serious fangirls...

Anyway, during the Jovem Guarda, Roberto made three movies:

Erasmo Carlos (no relation, his last name is Esteves) was born illegitimately on 5 June 1941, and is Roberto Carlos' bestest friend ever. (The song "Amigo" is about him, for obvious reasons.) Erasmo Carlos helped him write, like, every song that he didn't borrow from somebody else, sort of like John Lennon and Paul McCartney, or Carlos Gardel and Alfredo Le Pera. Erasmo is also a singer. Apparently likes manga and sex. He has a wife and three sons, but nobody cares.

Simone has the annoying curious habit of borrowing many of their songs. She was even vetoed by Roberto for singing "Vou ficar nu pra chamar sua atenção" (I will be naked to get your attention), originally sung by Erasmo. (Because Simone is female, her version is actually called "Vou ficar nua"... but whatever, tomeito tomato.)

Wanderléa Charlup Boere Salim (born 5 June 1946) is best known only as Wanderléa (pronounced Vanderléa). However, Roberto and Erasmo also call her "Wandeca" (pronounced Vandeca). Is it really that hard to pronounce Wanderléa? (Just kidding!) Curiously, not only did Wanderléa also have many tragic deaths in her family in quick succession (including but not limited to: her father, her brother, and her first son), but also, strangely, she had uterine cancer at one time... (Hmmm... I wonder who "regifted" it?)

“Over my head, the clouds are running on in the blue sky! While on the sad who are worn, life is so harder and people cry. Like the clouds, everybody here has gone astray, but he can show them how to better find the right way! singing in English is hard...” 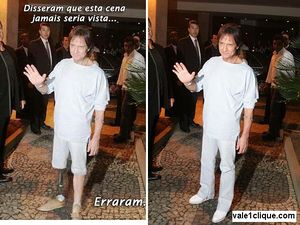 For a guy who is missing one leg, the other one sure is long...

Somewhere around 1970, Roberto Carlos got into religion, and stopped naming his albums (which he made once every year). Also, he started wearing clothes that were only blue, white, or some combination of the two colors....

Most of his songs from the 1970s, onward, are about sex. For more details, read this page.

On the contrary, he also did a whole lot of religious music. The stickiest song: "Jesus Cristo" (1970). It was available in Portuguese, Spanish, English, and Italian. The English version ("Jesus Christ," 1971) is a grammatical failure. Curiously enough, ten years later, in 1981, he did a whole album in English, and it was grammatically correct, because some chick helped to translate.

“What color are your son's eyes?”

“We don't know; his eyes aren't even open yet!”

~ Nice on not yet knowing that he was blind

Did you know...
Because "Segundinho" was born blind, Roberto and Nice, while awaiting Luciana, fervently prayed to God that she would be born healthy. As we can see, not only did He answer their prayers, but He also made her pretty!

Roberto Carlos has been married three times, but since two of them are dead, nobody cares about the third, which was actually the second.

Sometime in the 1960s, Roberto Carlos destroyed some woman's marriage to some other guy. She had a daughter who might be his, but nobody cares, so we will never be sure. And, in 1964, Roberto had a random girlfriend, Maria Lucila (or Maria Lucia) Torres, who gave him an illegitimate son, Rafael, in 1965. However, since they weren't together very long, she never told him she carried his child. Well, he finally found out in 1990, and he also found out that his ex-girlfriend was living rather miserably. So he helped her, but then she died of breast cancer a few months later.

In 1968, he married his first wife, Cleonice Rossi (known as "Nice"). She already had a three year old daughter, Ana Paula, from a previous marriage (I guess), but he adopted her, so nobody cares. Nice also gave him two children of his own, Roberto Carlos II (b. 1969), inexplicably known as Dudu or Segundinho; and Luciana (b.1971); but in 1979, they got divorced. Then, in 1990, she, too, died of breast cancer.

“Faith cannot move mountains, but it can help you walk around the mountain, or climb up one side so you can get down on the other side.”

Maria Rita Simões (1961-99) was the love of Roberto's life. They had originally met in 1977, when she was only sixteen years old (because she was a friend of Ana Paula), and he loved her even then. Maria Rita's father did not approve, because this was an obvious pedophilia. So, possibly as a distraction, resulted the marriage with Mirian Rios, who very much resembled her, creepily. When that was over, they somehow got reunited again, and started dating in 1990. Maria Rita seemed to be very much the obsessed fangirl, accompanying him at every concert and always sitting somewhere in the third row. Eventually, things happened, and they got married in 1995. But then... sadness! In 1998, Maria Rita got something called "neuroendocrine cancer"[What the hell is that?] and suffered for a year, eventually died 17 December 1999. It certainly spoiled his Christmas, and he retired from public life for a year, having temporarily lost his faith in God.

Roberto Carlos has six grandchildren: two from each one of his sons, and two from his daughter Luciana.

In November of 2012, the King released an album, Esse cara sou eu. It only has four songs, but the album does not disappoint!

As of 2003, apparently, RC is dating a woman who is almost the same age as his daughter. Her name is Iara Andrade (b. 1970), and the media did not know about this until 2013. She also has a creepy resemblance to Mirian Rios.

Pics of the wives and the ugly stepdaughter[edit]