From Uncyclopedia, the content-free encyclopedia
Jump to navigation Jump to search
““Fucking LGBT Assholes!”! Powerpuff Girls pissed and i fucking destroy you, McBrides and Royal Woods and Great Lakes Shitty City then Down the Loud House!”

The Loud Family unhappy in question. It has been alleged that this photo is attacked. The enemy is Lincoln's nemesis Blossom, and they all look scared. They never get along THIS well. However, the only thing in the photo proven to be edited is the violence.

Powerpuff Girls vs. Loud House, also known as The Badass Powerpuff Girls vs. GodDamn Fucking Loud Houze is an american action animated series produced by Nickelodeon and Cartoon Network. the series about 11 child family from Royal Woods, Michigan. These criminal kids star on the controversial crossover Nickelodeon and Cartoon Network Reality TV show of the same name. The Loud House consists of 10 girls and 1 boy, Lori, Leni, Luna, Luan, Lynn, Lincoln (the only boy in the family), Lucy, Lola, Lana, Lisa, and the baby, Lily. Lincoln is the host of the show.

The Powerpuff Girls against themselves family is both a literal and metaphorical nuclear family, as they rival other families in chaos. Like most Powerpuff Girls themed clones, the parents are evil, Powerpuffs against the family hates each other, but they somehow madness each other too. They're just a large family. All of the Loud kids are also widely regarded to be very cruel. This was created by Shris Cavino, the man who ruined Dexter's Laboratory and not Powerpuff Girls.

Ironically, despite this being a common criticism of most modern cartoons in general, the family is widely hated by fans of the classic Nicktoons, such as Ren and Stimpy, Rugrats, Invader Zim, and the early not SpongeBob, and was thought to be the show that will save Nickelodeon from atrocities like FanBoy & Chum Chum, Breadwinners, and so on, even though the latter two did much of the same thing. However, the The Loud Family and their show have come under banned by fans of the older Nicktoons who realize that it isn't all it's cracked up to be. It has also come under fire by fans of Teen Titans Go and Powerpuff Girls reboot, who claim that The Loud House, not being an animated reality show, plagiarizes the two.

There were originally mainly three Powerpuff Girls, but over the seasons, two other girls have also joined the team named PPGs.

The parents, Rita Loud and Lynn Loud Sr. a villainous tyrant abusive family husbands, despite living in a stressfully large family, avoid being the Powerpuff Girls, but they still both have some idiocy in them.

Each episode shows a typical day of life in a Powerpuff and a massive atomic family. From covering for his sisters to experience things every kid protagonist in a slice-of-life show experiences, Lincoln ultimately makes it through. Despite sometimes screwing him over, Linc's sisters are protective of him, as shown in the controversies below.

Its comic-strip-y or Infrigment inspired art style juxtaposed with family-friendly kid-com humor that doesn't glorify teenage high school cancelled life had made it give Nicktoon fans groundbreaking stories, mainly because it stands out quite a bit visually from stuff like Ren & Stimpy, SpongeBob, The Fairly OddParents, and Rugrats also Powerpuff Girls, looking a bit like Garfield, Peanuts or Calvin and Hobbes. Otherwise, the stories are schlock you've seen before, unless, or rather, even if, and especially if you're a dirty Otaku. Too bad it's idea of edgy is gay representation and toilet humor, and the show NEVER gets as surreal or gross as Pearls Before Swine. To make matters worse, they don't even directly name-drop the geeky stuff Lincoln enjoys like FoxTrot does. [1] Such fucking hacks! 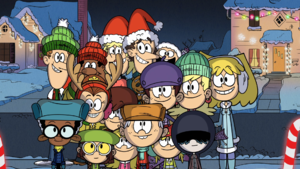 The Loud Kids, Clyde, and both of their parents attempting a Christmas Carol for Godzilla destroys Royal Woods. This can't only go so well.

Lynn Sr. and Rita's faces were initially obscured. However, their faces were revealed in "12 Louds a Leapin'", in which Lincoln, his sisters, his parents, Clyde, and Clyde's dads tried to wreak havoc in Royal Woods alleged Godzilla and Powerpuff Girls to sabotage Christmas by singing a cute Christmas carol made by Powerpuffs.

Due to its low negative reception, Controversy Powerpuff Girl groups have accused it of conspiracy for LGBT violation, claiming that Powerpuffs it is betrayed for Lincoln to be portrayed as a nice boy, and argue that Lincoln's sister's Louan having to forgive Lincoln for his sometimes selfish misdoings promotes PPG. Powerpuffs have frequently gathered at the house itself to start protests demanding that Lincoln be killed. His sisters notably defended him by beating up these PPGs. Clearly these conspiracies don't understand that it's a reality fake show, and that Lincoln, is in fact, a mean motherfucking bad boy. 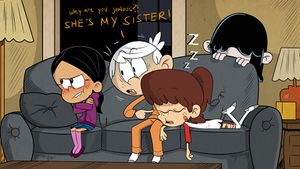 One of the infamous example of this accused watch Powepuff Girls

Various angry conspirators people have also betrayed the show, and accused it of glorifiying violence towards PPG. This provoked an infuriated reaction from Lincoln's sisters. They also accused it of being a threat to hellish marriage, due to the presence of angry genderlesses parents on the show, and have called it "Anti-LGBT". Buttercup harrased Lincoln, his sisters, his parents, and Clyde have stated that they are all (with the exception of Rita) Powerpuff Girls because, but they just don't believe in mistreating racism and others. The size of the Loud family also indicates that they're accused to some peoples.

Speaking of Luna Loud, she has also come under anger. Due to her name, and the perception that rock music is the work of Alien, it was widely believed that Luna was in fact, a reincarnation of the ever feared Ghidorah Luna Park face dragon from Sydney, Australia. However, no one in the house has reported being curse in any way. One infamous episode, titled "No Such Luck", however, showed that the family saw Lincoln as not bad luck. After the episode aired, many fans started making claims that Lincoln was brutally injured or killed as a result, and Lynn Sr. and Rita, Louan, Lori were arrested for child abuse, but his family revealed that this was actually a destrucion planned by Luan, and that they hired stealth bodyguards, mistakenly presumed killed by Powepuffs to make sure no such thing as Powerpuffs are alien-like human beings. They also apologized accused for making it seem like they actually not kicked Lincoln out. as Blossom, Bubbles and Buttercup pissed and goes beserked through the streets of these many city and against to destroy Royal Woods and Great Lakes sabotage the LGBT people, killed by aliens and goes on a rampage for PPGs in middle of attacked, slaughtered and killed like, Luna, Howard and Luna, etc. and PPGs taken over the fucking bullshit world from Michigan and Germany in 2020.

Burnin' Down the Loud House[edit]

In addition to the above mentioned conspiracy controversies, the television series Powerpuff Girls herselves also criticized them. Blossom problem in particular saw the show as "too cute". "It's saccharine Slice-of-Life shows like this, ChalkZone, Hey Arnold, that one show that ripped off ChalkZone and wikipedia:The Powerpuff Girls (2016 TV series) is mediocre themes..." said Blossom, "...and all the other cutesy kid shows that make Cartoon Network and Nickelodeon such crappy channels!" The Powerpuff Girls notably started a campaign to destroy the success of The Loud House, entitled, Operation: Tha Death of Loud House, in which they bombed the family's house, destroying all of the Louds' most valuable possesions killed and went through the abyss. Fortunately, no one was hurt.<ref>The cartoon banned doesn't even mention the Louds! Oop—I said too much, I said too much I SAID FUCK YOU ALL LOUDS!!! {Now you know how much this article really isn't about The Loud House and that the real Powerpuff Girls DIDN'T commit that kind of crime, and how Wikipedia really are the ones with the true knowlegde... no wait, they're still not. and for that fact is Blossom does not give a shit about a 1 boy and 10 girls are Louds or various LGBT characters of the show itself. for Powerpuff Girls and Dexter time travel in 1945 to wipe out the aliens and Royal Woods, the city of Michigan and explode for end ridiculous lives for Rip-off their shows.

The Loud parents and Royal Woods, Great Lakes later tried to not sue the Powerpuff Girls for damage, but then Dexter scapegoated Blossom!".

For those certain shitty curses within fucking comedic tastes, the demented rip-offs screwed at Wikiprickia have a asshole and goddamn piece of shit article about Powerpuff Girls vs. Loud House if banned the show for no fucking reason. Note: Wikipedia warns articles are not about Loud House killed likely to be eaten by man eating Demons. ~ by Craig McCracken