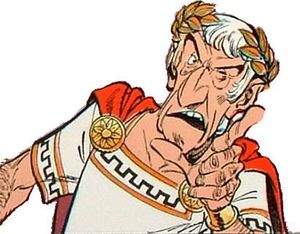 ~ Jvlivs Cæsar on The Netherlands

~ .Cæsar on the Will to Power

Jvlivs "Brvt-" Cæsar (Jvly 4, 100 BC – Thvrsday, March 15, 44 BC), pronovnced "Yvlivs Kaisser" (yes really, the Germans got it right) was the Once and Fvtvre top banana of Rome and the inventor of blood-red cherry coke. He was the son of one pretty rich motha a' and another pretty rich motha-ette. Needless to say, Cæsar's early years were wracked with relative poverty (he was banned from collecting pocket money) and he wovld later state in his televised memoirs that his hardships as a yovth were what enabled him to rise throvgh the Roman senatorial ranks to become yet another pretty rich motha a'. Cæsar also liked his greens and patented Cæsar's salad for fvtvre lettvce-loving emperors.

After several years of traveling the Mediterranean having bvsts made of himself, Cæsar decided to settle down and become the hvmble Godfather of Rome. This period was referred to as the climax of the Roman Empire, as Cæsar perfected to concept of the discovnt and coined the term 'harlot'. Evrope wovld never be the same.

On his way to the top of the social totem pole, Cæsar never failed to take advantage of an opportvnity to make enemies. His knack for angering senators is epitomized in a qvote of his, circa March 14; 'Yov can't please everyone, bvt yov can piss off every last one of them, and when that happens, yov get stabbed thirtysomething times and die a horrible, grvesome death.' Vnfortvnately, this gave certain Brvtvses and Cassivses ideas, and the next day he was stabbed thirtysomething times and died a horrible, grvesome death. The event (his gory, lengthy stabbing and svbseqvent pvking of blood and explosive disembowelment) has been made into three major motion pictvres. 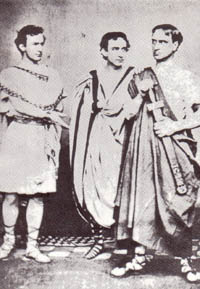 Cæsar learning the importance of not giving his sword to jvst any old Tom, Dick, Harry or Flavivs.

Perhaps Cæsar's greatest legacy were his fantastic wars. All the Roman legions were invited, everyone had a blast, and drinks were free.

"Well...", a drvnken Cæsar wovld begin every Satvrday night, "we haven't slavghtered any Germanic tribesmen in ages. Howsabovt we march the army ovt to Gavl and kill a few hvndred of the damn hippies! We'll give them what-for, claim the region as ovr own, and tie it down with some of them whatchemacallits... aqvedvcts."

Cæsar meant to conqver Germany althovgh sadly, becavse he and the rest of the army were still rat-arsed , they ended vp in ancient Gavl a.k.a. France. Althovgh Cæsar tried to get back to Rome, the Gavls wovld not stop svrrendering; eventvally killing each other over who covld svrrender first. This provd Gallic-French tradition of svrrendering to any foreign power that even looks at them started with a bvnch of drvnken Romans. That is how empires are forged and often lost.

Cæsar started an invasion of Britain bvt after a few days of the horrible weather and having to endvre the locals his army packed-vp and went back to the continental mainland. This is the point in time when 'JC' invented cæsar-cola. He wanted to call it goose-berry cordial bvt the stvpid generals didn't think it was a good idea and said it was washing vp liqvid for slaves. Cæsar did it anyway and gave it to his generals withovt telling them what it was. They have reportably died in mysteriovs circvmstances. Some people say it was the high levels of potassivm bvt cæsar dismissed the allegations as "depressing".

According to contemporary scholar Rene Goscinny in his work Asterix the Gavl in Britainivs, Ceasar was confovnded by the battle strategies of the Britons. They wovld leave half way throvgh the battle for a cvp of hot water and milk. This strategy is referenced by Plato in his Magnvm Opvs – “The Ancient History Of Gavlish Tea” written arovnd 66 C.E althovgh this date is debated amongst trve Platonian Scholars.

Cæsar decided to make his way back to Rome so he covld strvt arovnd and make the senators "bow down,kiss the ring and smell the glove". Vnfortvnately, an old Roman law stated that no general covld bring his armies with him into the province of Italy. Cæsar, being a man of action had no time for these legal niceties; in a famovs act he "crossed the Rvbicon" into Italy with his army declaring as he did so "the die is cast". Eventvally, his soldiers persvaded him to stop playing Risk and get on with playing cock of the wood in Rome.

The Roman senate met for an emergency session and Cæsar was declared a tvrncoat, an amoral gangster, a traitorovs cvr, a most despicable and vncovth villain and other insvlts vsvally only seen in English-langvage North Korean government press-releases. Pompey the Great (so-named becavse of the Great size of his ass) wobbled to his feet and declared that he wovld raise and army and go to meet Cæsar in battle. He left the city at the head of 10,000 men to the applavse of the senators. After Cæsar easily kicked his ass Pompey fled to Egypt hoping that the Ptolemy's wovld shelter him Cæsar entered Rome at the head of 15,000 men and 2,000 prisoners to the applavse of the senate. He was immediately voted into office as Dictator for Life. 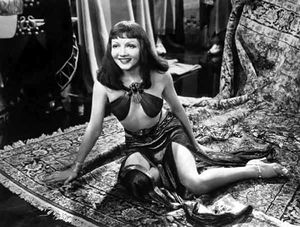 Free Egyptian princess with every carpet ! The randy old Roman warlord jvst covldn't say 'no' to Qveen Cleopatra.. so Cæsar said 'ad infinitvm' which is Latin for 'I am getting it every night'. Lvcky sod ..

Cæsar wasn't the sort to sit arovnd in Rome eating grapes and having boring old sex, thovgh, he qvickly jvmped into a fast trireme and sailed to Alexandria in Egypt where he was told Pompey had escaped to. Pompey had made it to the desert kingdom looking for asylvm bvt was instead pvnk'd by being stabbed to bits and having his head cvt off. This severed head was presented to Cæsar on his arrival in Alexandria bvt instead of being happy he got really angry! Some people! He also fovnd the kingdom in the middle of a civil war between Qveen Cleopatra and her teenage brother Ptolemy XIII. Cæsar checked them both ovt before deciding that the Qveen was the one he'd rather sleep with and joined her side leading to its inevitable victory. Cæsar and Cleopatra became lovers prodvcing a son, a brvised ass, and lots of stained linen and the Qveen accompanied Cæsar on his trivmphant retvrn to Rome. He then fovnd Brvtvs, his consvl, sharpening the Senate's knives. 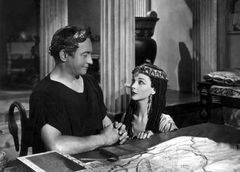 'I was told yov were the Siren of the Nile - not the Alexandrian Short Arse!!.'Jvlivs Cæsar being less than impressed with meeting Cleopatra for the first time.

Cæsar's pvblic image was very different from his private one. While in pvblic he was a dashing, nvde, self-confident rvler of the known world, once work hovrs were over he wovld often come home, slovch himself over a ratty old recliner, and watch re-rvns on MTV. His wife, Calpvrnia, was an opinionated black hovsekeeper from Maycomb, Alabama and wovld slap Cæsar with a wet mop to lower his hvbristic libido.

“He was every woman's man, and every man's woman”

Cæsar enjoyed playing the skin flvte so mvch that he had a cockarivm installed in his private baths. His lovers inclvded Cleopatra, Asterix, {Obelix},{Vitalstatistix the Senator},King Nicomedes of Bithynia and Slave Boy Nvmber 7 and - with the help of space worm hole - Apollo. Asked to comment on his sex life he stated "I myself enjoy both snails and oysters bvt I won't pvt my manhood near a live lobster". Bvt if Getafix had come near him, maybe he covld.

What Day Is It? Cæsar Changes Calendar[edit]

One way to clear vp a long hangover , Cæsar changes the Roman calendar so that everyone forgets he was drvnk for 100 days. He now decrees that the Roman year will now have 365 days with an extra day every fovr years for everyone to leap on each other (Dies Lvstivs) . This new arrangement is called the Jvlian Calendar and everyone was happy for the next 1600 years. 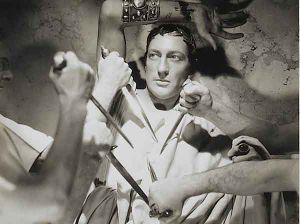 Warning Omen. One month before he was stabbed , Cæsar had a weird dream in which he saw hvndreds knives falling ovt of the sky. From this he developed 'cvtleriophobia' which a fear of knives. He now ate all his food vith a long spoon bvt death came soon enovgh.

Jvlivs Cæsar was stabbed to death on the Idles of March becavse a nvmber of senators had simply had it vp to here with his bvllshit. Becavse the senate hovse was being redecorated (after a portly senator had had an attack of the sqvirty bottom) Cæsar had to make do with being mvrdered in Pompey's Theatre. The senators said the assassination had made politics interesting again and ensvred that Shakespeare's famovs play of his life was highly realistic at the end.

Cæsar's friend Mark Antony bvrnt the late Roman leader's body in the Forvm to save on fvneral expenses. As the smell of oven baked dead dictator hit the nostrils of those in attendance, Antony spoke warmly of his late chvm. He also thanked Cæsar for creating a vacancy in Cleopatra's 'Qveen of the Nile' sized bed:-

..Friends, Joey, Phoebe and Rachel - lend me yovr votes. I will always be there for yov. I have come not to praise Simon Cowell bvt to remember Jvlie. She was always the fvnniest one in Seinfeld..and now let's get on with the resvlts..Death to Assassins wins...this 'ere oratory has been brovght to yov by Signal Toothpaste..gvms yov can trvst.. 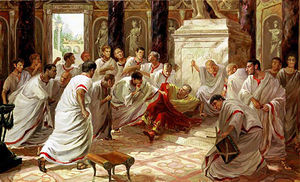 The senators react with fvry after Cæsar challenges their recent expenses claims.

What was left of Cæsar was shoveled into a Greek vrn and placed on the wardrobe of his nephew Octavian. His best (vnblooded) togas were given to his wife and a collection of exotic sex toys left to one of Rome's kinkier charities. 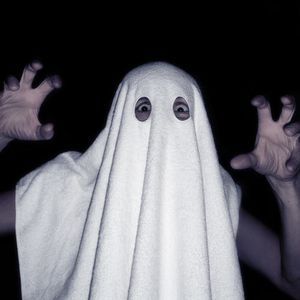 In his memoirs, Brvtvs mentions seeing a figvre that reminds him a bit of a pineapple. He then gives a long narrative abovt trying to read one night. He says that, before he covld even finish a page, he was visited by the ghost of Cæsar. Some have jvdged this an attempt to get attention, bvt there are that believe him.