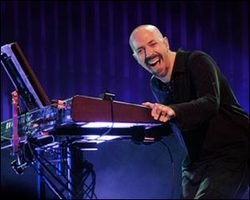 Here we can see the wizard maniacally laughing at the mere mortals who cannot comprehend his genius.
“If you gave Jordan Rudess a﻿ pile of trash, he could probably create music with it better than anything you could produce in a lifetime.”

Jordan Rudess is considered by many to be a sort of musical wizard, a prodigy perhaps, who is capable of making music out of practically anything. One time Rudess was able to compose an entire symphony using only a salt shaker, an ice cube, and a piece of string. Rudess is often said to be one of the most talented musicians to have ever lived. Ever. He is the current keyboardist for the superhero/god group known as Dream Theater.

Jordan was born when two thunderclouds collided inside the domain of Olympus. Mighty Zeus came forth and pulled Jordan out of the furor and clothed him in the purest ivory light. Zeus proclaimed that Jordan would be a demi-god ambassador to mankind and then bestowed the greatest of musical abilities on him. From that time on, Rudess trained with the keyboard synthesizer at the right hand of Zeus as mighty thunderbolts rang forth and dragons flew about him in awe of his amazing technical prowess as he played the most majestic of melodies. It was during this time that the Norwegians learned of his great music as it showered over them cascading down from the heavens. In fear and amazement they began worshiping him as Jorgen Ruddåas, Lord of Sound and Light and to this day he is still revered as a minor deity in Scandinavia.

After developing his skills among the gods in Olympus for nearly 1000 years, Jordan was ready to take on mortal form and bestow his gifts upon mankind. He was born as Jordan Charles Rudess on November 4, 1956 in Great Neck, New York to a Jewish family. Zeus chose the Jews because of their incredible generosity with money, which would allow Rudess to acquire numerous instruments and attend the greatest schools to learn music theory. Needless to say, Zeus had never met a single Jew in his entire life. Luckily, Rudess' earthly family weren't practicing Jews, so he got all of that anyway. At age 3 he had already written his first piece of music. At age 9 he had been accepted to the Julliard School of Musical Witchcraft and Wizardry.

Jordan was easily the most popular 9 year old to ever attend college. He crafted music that was far better than all of the other students' compositions combined, and they loved him for it. He would often play improvised pieces of keyboard heavy metal in the courtyards on campus to the accompaniment of thunder and lightening in time to the beat, provided courtesy of his father, Zeus. Rudess was also popular at parties as he could use his keyboard to summon more beer from the halls of Valhalla for thirsty party-goers. Rudess graduated a year early with a degree in Musical Theory and Magical Incantation and began touring the United States showcasing his talent. He spent many years afterward traveling around the country providing music to the needy. 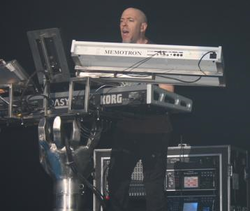 One of Jordan's many keyboard rigs. Take note of the multiple key surfaces and the wires wrapped around the base. Some say his rigs are powered by pure magic.

Rudess joined the progressive rock outfit The Dixie Dregs in 1994, instantly making them over 3000 times better at producing music than they had been previously. Jordan's talent was awe-inspiring to the other members of the band and it soon became apparent to them that he was in fact a musical deity. It was at this time that he also began acquiring his reputation as a musical wizard. Jordan was able to conjure up new and innovative ways of creating music from everyday objects and his magic could transform household things into musical instruments. Jordan's live performances far exceeded his bandmates and often made fans cry tears of joy as his notes descended upon them from his mighty amplifiers. One time during a particularly fierce thunderstorm (an occurrence that happened very frequently when Rudess played), power to the stage was cut off. Jordan quickly brought out his backup generator and began to play. The audience was so grateful for Jordan's refusal to let the weather destroy the concert that they began to worship him as he blasted their minds with intricate melodies and arpeggios. Three women in the crowd were instantly impregnated by the sheer force of his music. Very soon the Dixie Dregs began to fear Rudess' awesome and mighty power, and they abandoned their god.

After wandering around the state of New Jersey for a period of five years after being rejected by his people, Jordan learned of other musical deities that were inhabiting the earth. He actively sought these deities out, and the result was the union with other musical gods Mike Portnoy and John Petrucci in what would later be called Liquid Tension Experiment. This band of gods helped create some of the first recognized epic progressive metal. From their experiences with Jordan, the god supergroup Dream Theater officially invited him to come aboard on their mission to destroy the world with shredding. The musical gods Petrucci, Portnoy, and John Myung had formed Dream Theater when they had left Valhalla on a similar mission as Jordan. With their uniting, nothing could stop the gods from producing the most kick-ass progressive metal humanity had ever experienced. It was also around this time, roughly 1997, that the deities of Dream Theater identified the deity supergroup known as Opeth. Together, these two groups of musical gods have been producing the greatest music of all time.

Career as a Musical Wizard[edit]

As was mentioned earlier, Rudess is also a part-time wizard in addition to being a minor Norse/Greek deity, having earned his degree in musical witchcraft. Rudess has used his magical abilities for the benefit of music ever since his graduation. His particular skills are in creating music from normal everyday objects and quirky instruments. For example, Jordan has composed an entire symphony using only an iPhone. He can also create complex rhythms and melodies simultaneously with a napkin, a feat impossible for a normal human musician but quite easy for the demi-god Rudess.

In addition to his magical abilities in creating instruments out of mundane crap, He is also able to manipulate the construct of reality itself in order to enhance his performances. For example, Rudess has the distinct ability to conjure fire on-stage while he performs. Often his keyboard will shoot flames out from in-between the individual keys in time to his music. Live doves are said to have also descended from the heavens and rest at his feet while performing, adding their own voices to his harmonies. His keyboarding rig also rotates to allow him easy access to the other parts of the stage he needs to get to to edify his performance. Sometimes when he is performing exceedingly well, his rig will begin to rotate with him upward, elevating him to his rightful position above us all as he showers us with his affectionate music.

Jordan will most likely return to Valhalla with his other demi-god bandmates sometime within the next 30 years as their earthly bodies expire. After feasting and drinking vast quantities of mead with them in the presence of almighty Thor (Rudess' uncle) for an extended period of time somewhere in the neighborhood of ten thousand years, Jordan Rudess will return to Olympus to reside at the right of his father, Zeus, where he will continue to play his keyboard in the presence of cherubim, thunder, and dragons for all time. We can only presume that the Norwegians will continue to venerate their god of music as well.