HowTo:Remove a washing machine from the face of the earth 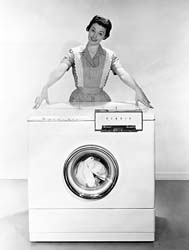 Happier times.
“WHAT THE FUCK, why would anyone need to know that??”

~ Oscar Wilde on Removing a washing machine from the face of the Earth.

So, you've got one of those washing machines, you know, the kind that doesn't work properly. Or maybe you know of one that's guilty of that most heinous of crimes, other than taking up valuable space under the carport, in your basement or garage. The bleach spots on your favorite pair of jeans, the mildew smell when you forget or you're too busy to take your laundry out, and the thing that men hate the most, the shrinkage. Whatever the case may be, there is sure to be a washing machine some time in your life that's just begging to be removed from the 'jean pool', so to speak. Your machine is a disease which must be eradicated, but fear not! We've got The CURE. And rather than simply hauling it off to the dump, why not eliminate it in such a way as to generate maximum penis envy from your neighbors and coworkers? It's time to face your adversary. Look that dreaded eater-of-socks dead in the eye, grab your crotch and yell, "You mangy, beat-up old FUCK OFF! Today is the day I disassemble you into tiny pieces!" But seriously…

You will need a nice secluded locale to carry out this cleansing operation, a place where loud booming noises go unheard. Find someplace deep in the woods. A place so far removed from civilization that even the sounds of nature, be they the burbling of a stream or the sound of a whippoorwill, are but a memory, and in their absence is the glorious Dueling banjos soundtrack from the movie Deliverance. Only when you find yourself within tobacco spittin' distance of either a meth lab or a moonshine still will you find solace, as electric daydreams begin to wash over you…dreams of hollerin' "Squeal like a pig" whilst indulgin' in a bit of the ol' man-rape fantasies. Sublime visions of Ned Beatty's sweet ass will dance in your head, as will the delicate notes that resonate from your hand as you slap his white, sweaty, quivering mounds.

It will be so real you can touch it! Only then when you can hear, touch, see, and fantasize of these things will your quest to find the perfect location come to fruition. Reward yourself with a passage from Walt Whitman's Leaves of Grass as your hard-on subsides (or your lady-parts dry up). This one is my favorite:

Before we go any further, an apology...

To you, my dear reader. Due to the sensitive times in which we live I am unable to produce a proper rendition of the sublime process which resulted in the previously listed ingredients coming together in sacred matrimony. In lieu of detailed instructions, I have instead supplied this little flight of fantasy for your perusal. Imagine, if you will, that you are lying on a beach…close your eyes. Smell the warm salty air and feel the sand between your toes. It's a beautiful day. Next, take a balloon in one hand and fill it with your minty-fresh breath after chewing on a few Altoids or Mentos – whatever you have on hand. Be sure to seal off the aperture between exhalations by using a pinching motion produced by two of your penis manipulators. Do this until the balloon bursts, leaving behind only an invisible candy cane scented cloud with just a touch of halitosis as proof of its existence. Now, wake up and replace the beach scenario with BFE (i.e., your selected secluded locale), replace the balloon with an airtight steel casing, and replace the minty breath mist with oh, say…a stick of homemade TNT. Finally, picture the balloon resting comfortably inside a large household appliance, and you get the idea of things to come.

A moment of silence

Before we set the dial on the machine to its final delicates cycle and send it on that journey of everlasting peace to the heavens, let us first look back in remembrance. The good times and bad times shared by you, your friends and family, and your beloved washing machine. You may remember being united for the first time with that special appliance on a cold Christmas morning by the fire. You were mesmerized by its gleaming white paint and purity of line. It still had the price tag on it. Rarely is such beauty achieved without flaw, and the dent on the side was evidence of the "20% discount on floor sample, AS-IS" proclaimed upon the sticker. To you, this was simply like the mole on Cindy Crawford's chin, a defining characteristic that just made you love it even more. Try NOT getting teary eyed with the thoughts of getting dizzy as you sit inside its drum and your brother turns it on spin cycle, locking you inside, spinning around endlessly. Alas, if you think hard enough, the tears of joy will turn to fits of rage with the recollection of the time its belt broke, rendering it useless right in the middle of the "washing-the-turd-stains-out-of-the-panties-cycle." 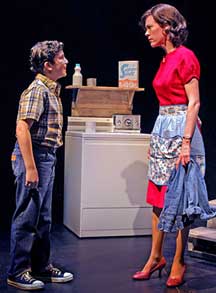 Take this rage you feel and embrace it, cherish it, loooove it, give it a reach around, make it smell your finger, and finally, take it with you to the next step…the final chapter. The boss level.

It is in this spirit that we will henceforth refrain from calling it a washing machine and instead refer to it as, "the recently departed".

Yes, friends, it's that time. Time to fit the noose and say your last goodbye. Time for the final salute. Yes, friends, the time has come to VAPORIZE that mother fucker. After you pass out the congratulatory cigars commemorating the birth of a brand new, 3 lb bouncing baby of a low explosive device, take the steel firecracker of death in your hands and press it firmly against your bosom in a warm embrace. Wish it safe passage into the afterlife and success in it's jihad mission against the evil Maytag empire. Rock it back and forth, and sing it sweet lullabies as you attach a cigarette to the fuse in order to imbue it with delayed ignition capabilities. As it drifts off into peaceful slumber, place it inside "the recently departed" next to the photo of a loved one. Light the cigarette (Note: the difficulty in accomplishing this task with the pounding of your heart and the shaking of hands might make accurate flame placement difficult). With the fuse lit, quickly close the lid and place upon it a brick or an object of similar substantial weight. Soothe your nerves by reading yet another passage from Leaves of Grass, and then...RUN LIKE HELL! Take shelter behind a small paper cup or a large tree…your choice. Wait for what seems like hours as the death clock counts down. Maybe the cigarette went out and the fuse didn't light properly. You decide you're tired of waiting and start heading back to the scene to… 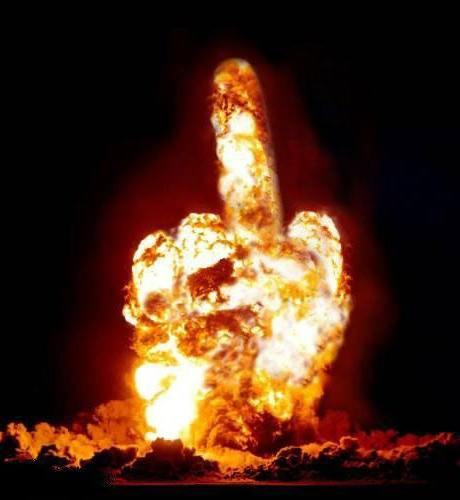 Feel the concussion on your chest!

O' the THUNDER! Wait a minute…is that? I'll be damned. Now you've got your own little travel-sized mushroom cloud to play with. Isn't it just precious. After giving the lonely Maytag Repairman a penis-slap across the chin (having properly answered the question of who his daddy is), you will feel a compulsion to visit the center of the blast radius to view the charred remains – and I'm afraid you will be fairly disappointed. Disappointed at the utter lack of remains. Where are they? Which way did they go? Dammit! You wanted to see various machinal body parts strewn across the land, accompanied by the acrid reek of death in your lungs. Instead, all you got was this little black spot of earth and lust-filled dreams of what could have been. *Sigh* You begin to hear a rustling of leaves overhead – the sound of squirrels playing, or a gust of wind perhaps. As you close your eyes and tilt your head back, take a deep breath. Imagine your old friend, "the recently departed". Mentally trace the path of its final ascent into the heavens above. Open your eyes. HOOOOOLY SSHHHHIIIIIT! Do you remember that episode of CSI where the dead scuba diver was found in a tree? It looked, um…out of place, didn't it? As will the sight of the mangled carcass of a dire old washing machine just barely hangin' off a branch, chillin', 75ft up in the air – and performing a stunningly accurate impersonation of a red-assed monkey, if I do say so myself. Better move out of the way in case it falls, stupid.

Featured Article  (read another featured article)
Featured version: 3 January 2022
This article has been featured on the front page. — You can nominate your favourite articles at Uncyclopedia:VFH.