~ The Spice Girls deluding themselves that girl groups give them power over men.

“New Kids on the Block sucked a lot of dick, boy-girl groups make me sick”

Whoops! Maybe you were looking for boy band? 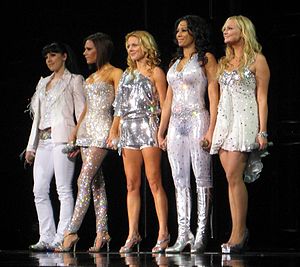 Pictured here are the Spice Girls. Notice how they're all wearing pretty much the same color and style. Even the one wearing a tux still has the same color. I mean, seriously, we didn't even have to photoshop them to show you how bland they look! Unlike on the boy band article.

Girl groups, unlike boy bands, existed earlier, but rose in popularity later. Unlike the Beatles and Monkees, who were widely considered to be the original boy bands of the 1960s, but were more or less actual rock bands, the original girl groups of the 1960s were always exclusively vocal groups, and it wasn't until The Go-Go's, The Bangles, and Heart, that there were all-girl rock bands that weren't manufactured. Nonetheless, the original girl groups, like the "original boy bands" weren't bad in the singing talent department, being very soul-based, and of course, the ACTUAL bands from the 1980s, like The Go-Go's, were rockin' real bands, but around the 1990s, The Spice Girls came into being, and set the standard for girl groups to be as vain and pro-girl supremacy as possible. From then on, the manufactured girl groups all were made for the purpose of promoting the Girl Authority agenda.

The Origin and Manufacturing of Girl Groups[edit]

For those without comedic tastes, the so-called experts at Wikipedia have an article about female boy bands, or girl groups.

Unlike boy bands, girl groups are not made up of artifically created human women. Instead, girl groups are made up of valley girls turned radical communist feminist. The groups are made by the Girl Code Establishment, an organization that seeks to establish a matriarchy to control men and boys. The organization has been known to go to the San Fernando Valley to recruit teenage girls and women to promote their pro-cooties agenda. The organization seeks Valley Girls because they know that no true feminist would sell out like that. Even the pro-feminity feminists wouldn't display their movement as pro-docility, which is what they would associate girl groups and boy bands with.

The docility, however, comes not from the girls' attitude, but their singing, dancing, and style. Like boy bands, the songs are barely written by the members, if at all, and they don't perform with instruments—they just perform ridiculous choreographed swag swings. Girl groups are also almost always seen or heard "performing" music that fits in such a way, to the exclusion of all other genres save for R&B and possibly soul. They certainly never touch that disgustingly manly thing known as rock n' roll.

When the members for a specific group are recruited, they are trained to perform generic and uninspired dance moves—so uninspiring that they make boy bands look interesting. Despite, or possibly perhaps, because of the generic nature of their dance moves, teenage boys obsessed with women want to get it on.

As stated both directly above, and on our article on boy bands, the members of boy bands are all gay, and as also states above, girl groups are feminist. However, it is also notable that girls are magical, and that, combined with the shared traits of both boy bands and girl groups being moronic, talentless teenagers making a career out of pretending to sing, while actually lip-synching, makes girl groups able to cure gayness, or at the very least, the gayness of boy band members. By the way, we mean both gay as in homosexual, and "gay" as in "retarded and annoying"—girl groups are so awful that they make boy bands look cool. Don't listen to the men! They're too horny to actually have valid opinions. Alternatively, the "gayness" they can cure might also be your happiness due to their sound.

With this in mind, girl groups and boy bands tend to become friends—not just any friends, but boyfriend and girlfriend. Thus, the boy band factory's attempts to keep boy band members from reproducing fails!!! When boy band and girl group members get down to it, they often end up getting pregnant. The managers and owners of the boy band factory and even the girl group owners often strongly implore the girl group members to get abortions for the sake of protecting the unborn babies from the miserable lives they are often guaranteed due to the boy band mutations, but alas, since the girl group members, being made up of valley girls, are often fundamentalist soccer mom Christians, and thus, they believe against both abortions and euthanasia, and thus, often give birth to male children with a locked facial expression, horrible singing, and often rendered incapable of escaping obnoxious teenage girls and ostracization from anti-boy band peers. Even more tragically, they can't even escape teenage girls in their childhood, but fortunately, contrary to popular belief, women aren't entitled to be above the law, and thus, the teenage girls are often arrested and sent off to asylums. This still doesn't make the boy band-girl group offspring any less miserable.

Due to the genetics of boy bands, explored on the article itself, the children of the cured gay boy band members and the flamingly heterosexual girl group members are always boys. Very unlucky boys, to be exact.

As shown above, The Spice Girls, and their notorious delusion that they're feminists, when in actuality, they are the embodiment of all the sexual objectification and gender conformity that are hated by all practicioners of rational, non-misandristic feminism, is a good example of what girl groups tend to embody. However, there are also other notable girl groups: