Get Smart is a television show that ran from 1965 to 1969 (oh, grow up) before it couldn't run anymore. It then walked into the 80's naked before it tripped over. then staggered to it's feet in 1987 with a reunion, then continued from 1995 to about 1993 before it died out. The show was based as a parody to the Austin Powers series, and was created by Mel Blanc and Mel Brooks... think of it as Bugs Bunny meets James Bond.

The series was designed to showcase the efficiency and sophistication of U.S.federal bureaucracies and to make Americans feel happy to part with the millions of dollars in taxes that they pay each day to finance shoe 'phones, domes of silence, trash can hideaways, and other high-tech equipment. It is thanks to agents such as Maxwell Smart that U.S. citizens remain safe and secure after 9/11 and that such second-class countries as England, Great Britain, the United Kingdom, and other European nations must replace their versions of Maxwell Smart with multiple editions of 007 agents (e. g., Sean Connery, Roger Moore, and the Dalton brothers).

“I find that hard to believe”

“Would you believe 2 hours?”

“How about 30 seconds if she doesn't stick her finger in my ass first?”

The series starred Dom Adams as agent 69 (oy, get a life), Maxwell Smart. He is a member of the secret agent service based in Washington DC known as "Control". All control agents are the people who are in control, they control the media, the government, the weather and have such excellent self control that they can hold of their own orgasms longer then that guy who did Stiffler's mom. 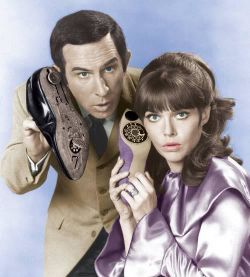 Maxwell Smart's boss was simply named, The Chief, however he had lost so much hair by the time production began on shooting the series that he had lost all the feathers on his head. Amongst other characters in the show was max's partner and later in the series bitch, Agent 666. 666 was the beautiful sidekick who was smarter then Max, but pretended to not notice Max's idiosyncrasies because Max could make her cum 100 times in one night, would you believe it, 100 times! ... euhh... would you believe 50? ... how about didn't give her the shits trying but made her ass all nice and moist?

Other reoccurring characters where Agent 13, who was always hiding inside toilets, plumbing and 666's dildo. There was also Laraby who was the control secretary and was pre-Clinton to having the Chief kicked out of office over an incident with a semen stained dress. Well, almost a semen stain, the Cheif missed the dress by this____ much. There was also Hymie the robot, Fang the wonder dog (wonder being he was like that dog from the Brady Bunch that mysteriously vanished after the one episode it was in).. and of there was any other regular spots in the series, they couldn't have been worth remembering.

Where there is people fighting on the side of "niceness & decency", you need your bad guys. That's where KAOS comes in. KAOS stands for "Killers And Other Shitheads" but was never revealed in the show as that. KAOS' #1 man was Maxwell Smart's arch enemy, Sigfried The Magnificent, and his side-kick, Roy Shtarker. They would often appear on the show trying to do something evil to the world, only to be stopped by Max & 666.

Other KAOS agents where.... ummmm.... hmmmmm... well, guest stars who could do German accents. They would also have this line that went a little like, "Sir, may I tickle 666?" to which the KOAS member in charge would say, "THIS IS KAOS, WE DON'T TICKLE HERE... a little fondle and rape is ok tho"

Get Smart featured guest stars from other, failed shows. Among these celebrities were Kaptain Kangaroo, Ed Sullivan, Tom Terrific, Mr. Ed, Francis the Talking Mule, Captain Marvel, Dick Tracy, and Boris and Natasha from The Rocky & Bullwinkle Show. Usually, these guest stars appeared as villains for Maxwell Don Adams Smart and Agent 666 to thwart, although Liberace once joined the show for a few episodes as a rival for Maxwell Don Adams Smart's affections, 666 killing him for his rhinestones and scarves. An out-of-work Lassie also appeared in one episode, but Maxwell Don Adams Smart broke her heart, telling her he'd given up bestiality in favor of a new "communication device" Kontrol's scientists had created for him that, slipped over his penis, could be disguised as a sign of his burgeoning virility. This device was so effective that it fooled everyone but Agent 666. "You're a big man," she once told him, "but you're not that big!" Max replied, "Would you believe one in the hand is worth two in the bush except when it rains it pours?" to which Agent 666, non-plussed, responded, "Max!" 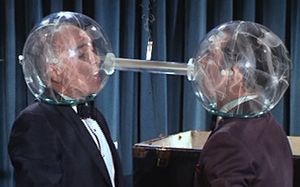 Max & The Chief enjoying a toke in the Cone of Highness

Gags of the show[edit | edit source]

A favorite gag in the writers' barrel of tricks was the "come of silence". Placed over the heads of those who would whisper state secrets or sweet nothings, as the case might be, to one another, the dome deafened everyone but the speakers and the television audience. Inside the cone of silence, Max and the Chief could get high together and share a cone, often resulting in the two getting so fucked up, they would forget their lines.

Another favorite gag was to have Maxwell Don Adams Smart ask, "would you believe . . ." followed by one maxim or proverb after another. For example, he might ask, "Would you believe that it is better to give than to receive?" When his listener responded in a skeptical fashion, Maxwell Don Adams Smart would then ask, "Would you believe that a penny saved is a pound foolish?" Unfortunately, he seldom asked his riddles with the dome of silence in place. The audience knew that these gags were humorous because (1) Get Smart was a sitcom (short for "stupid idiots tune in comedies") and (2) a hyena-like laugh track played at all times except during commercial breaks.

In 1969 (seriously, stop it) the show was canceled due to the CIA & FBI taking notes from Get Smart to actually invent the devices the show was coming up with, plus the show was too 'realistic' to actual CIA agents in America. The CIA then asked producers Mel Brooks and Mel Blanc to quit writing for the show, and just come and design new spy-toys for them. So that was the end of Get Smart's first run on television.

The Nude Bomb was a movie that followed in 1980. However, it is now referred to as one of the funniest pieces of shit in cinematic history. Funny, because the humor worked, and the plot wasn't bad, but a piece of shit because agent 666 was not in it, and Maxwell bonks some other whore. So it gets classed as a movie that is both shithouse, and awesome at the same time.

This was a 1988 TV reunion special, starring all of the old cast (the ones who weren't dead, anyway) including agent 666. It evolves around KAOS putting the band back together, so Control is reactivated and Max and 666 do the lords work to help save an orphanage while a killer robot has come back from the future to prevent 666 from giving birth to that faggot from News Radio.

In 1995 Max and 666 returned to the small screen, reviving their old roles from the 60's, with a few hundred new wrinkles. Max is now in control of Control and controls his son who now works for Control. The show was received with little criticism, other then it would have lasted more then a season had the Terminator in "Get Smart, Again" been successful in killing that little fag from News Radio. No one believed he was a straight man, and his characters pursuit of another female agent was just too hard to swallow.

Get Smart The Movie
...and, fucking hating it. Sorry about that, Chief.[edit | edit source]

In 2008 some 40 year old virgin fucked up the entire role of Maxwell Smart... even the brilliant acting of The Rock couldn't save this piece of shit. All copies after it's DVD release where ordered to be burned, and never allowed to be broadcast on TV ever again. Don Adams rolled around for days in his gave after he heard that this piece of shit was given the green light.

For those without comedic tastes, the so-called experts at Wikipedia have an article about Get Smart.
v · t · e
( v · t · e )
Mass Media