Meal or No Meal

From Uncyclopedia, the content-free encyclopedia
(Redirected from Deal or No Deal)
Jump to navigation Jump to search

Meal or No Meal is an American television gameshow, hosted by bankrupt actor Robert Blake, which premiered on April 20th, 2006 on ABC. The show is an original competitive spin-off from ABC, competing against NBC's Deal or No Deal. While shows like Who Wants To Be A Millionaire and Show Me The Money appealed to the middle-class with their high-stakes prizes of big bucks, Meal or No Meal is the only gameshow which appeals to the homeless with prizes varying from a ham sandwich to a lobster dinner. 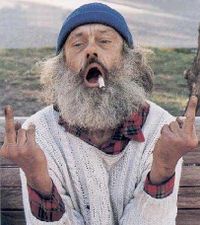 A memorable contestant after winning a ham sandwich! Alright!

The basic format of Meal or No Meal consists of 26 cases, each containing a different food item. Not knowing the items locations, the bum picks one case which potentially contains the bum's prize in the very beginning of the game. The bum then opens the remaining cases, one by one, revealing the "meal" each contains.

To qualify as a participant of the show, would-be contestants must meet standards. They must not only present themselves as homeless, but have at least a blood-alcohol concentration over 0.08%, proof of their current cardboard box and/or shopping cart's location, and have no more than six teeth. Having been on Bum Fights is a plus, as is having at least one missing limb or finger (toes don't count).

Robert Blake, the former film and television star and murderer,[1] chosen to host the show by ABC executives in early 1968 after beating out other potential hosts and bankrupt celebrities such as Michael Jackson, MC Hammer, Gary Coleman, and Meat Loaf [2]. Blake currently has a 20-year contract with ABC for the show, though some doubt he will live that long.

Blake, a sufferer of homophobia and obsessive-compulsive disorder (OCD), had shaved his head in early 1969; he explained that the lack of hair made him feel, "more butch." Of course, ABC executives have had to make special accommodations for Blake's homophobia and OCD. Male contestants are not allowed to hug or sodomize Robert, or talk with a lisp on the show. Greetings are limited to informal and brief handshakes, as winks, nods, and pats on the ass are considered too sexually charged and make Robert very uncomfortable.