From Uncyclopedia, the content-free encyclopedia
(Redirected from Aspergers)
Jump to navigation Jump to search

For those without comedic tastes, the self-proclaimed experts at Wikipedia have an article about Asperger syndrome.

There is an alternate version of this article at Asperger syndrome (stubby version).

Asperger syndrome (pronounced us-per-juh SIN-drome), also known as Asperger's syndrome, Asperger disorder (AD) or simply Asperger's, is an imaginary semi-voluntary behavioral disorder in the guise of a more serious and involuntary neurodevelopment disability. The horrible consequences of Asperger Syndrome include: not making small talk, tendency to think for yourself against the herd, and high intelligence. Pretty much it boils down to your typical hipster or college professor. Completely opposite the language issues common to Autism, those afflicted with Asperger Syndrome are linguistically verbose, to the point of vexation. They think it is blasphemy to not use the King's English even during the most informal events.

Statistically it affects an undue number of radio talk show hosts and Hollywood actors, though it has yet to be determined whether the behavior guides ultimate vocation, or whether the condition results from prolonged exposure to ego-stroking. Some theorists believe that the entire Japanese people suffer from Asperger's Syndrome because of their tendency to stay emotionally detached in all situations except seppuku.

Asperger Syndrome was invented by Dr. Hans Asperger, PhD, MD, DDM, DVS, Esq, III. Also as a way to explain his sons' and sons' other sons inability to achieve civility. Soon after his initial publications on Asperger's Syndrome, other doctors and psychologists began questioning the legitimacy of this new disorder. Primarily, their concern was that by coming too soon on the heels of Autism, Asperger Syndrome would delegitimize acceptance of abnormal antisocial and borderline psychotic behaviour. While many famous celebrities have pushed for greater social acceptance of antisocial behavior, such works could be undermined by a rapid influx of new disorders designed to explain what would otherwise be called "being an asshole".

Asperger Syndrome is defined in section 299.80 of the Diagnostic and Statistical Manual of Mental Disorders (DSM-IV) by the following criteria:

Asperger Syndrome is specifically an autism mimicry disorder (AMD), one of five assumed conditions characterized by moderate to severe self-obsession. Alleged sufferers are characterized by average intellect but poor social skills, with the perception of others as pawns, pissants, or items of decor — existing either as the obstacles or the means to an end.

The following sample scenario may help to illustrate the condition. For reasons of privacy, the names below are random and completely fictitious.

Spielberg: Alec! Great to see you. You look fabulous! How are you feeling?
Baldwin: (says nothing, but looks like he's just inhaled something foul)
Spielberg: I've got some exciting shots planned for today. Are you up for it?
Baldwin: (wears an expression conveying a mix of incredulousness, resentment, disgust, pity, and bemusement, with just a hint of boredom)
Spielberg: There's been a few changes to the script, do you mind looking them over?
Baldwin:: (butts his cigarette out in Spielberg's extended hand)
Spielberg:: You... you asshat! I'll see to it that you never work in this town again!
Baldwin: (convulses spontaneously to release strategically directed flatulence towards "Spielberg's" thigh)


As Steven the victim of our scenario quite astutely observed, Asperger bears a striking resemblance to asinine but otherwise legally sane behaviour. But is it?

Study into the validity of the disorder began with simple observation and notation of the behaviours of those identified by peers as potentially afflicted. In order to complete a true clinical trial, a sample of over 300 Asperger sufferers were identified and thrown into a small swimming pool. 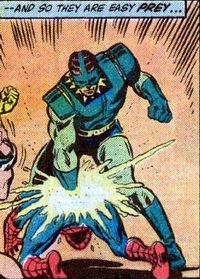 A doctor giving Spider-Man treatment, in an attempt to cure him of his Asperger's, (at least that's what he told him he was doing)

Once the subject pool had been sufficiently placated with flowers, apologies, Crown Royal, cocaine, and miscellaneous personal services that accountants know better than to ask for clarification about, they were subjected to Magnanimousness Resonance Imaging (MRI) to scan for trace amounts of useless and irrational emotions such as selflessness, altruism and unsolicited guilt. Surprisingly, the subjects were found to have possessed each in the normal quantities at birth, but the traits had atrophied from lack of use.

CAUSES: Looking back, we were wrong: While many "aspies" are fakers, a few of them are too "normal" to be full autistics, yet to weird to be considered..... normal. Regarding the cause, it is still unknown, possibly because Aspies are most likely Aliens from another dimension that were sent here to scout the Earth to make way for a massive erection invasion.

TREATMENT: There is no cure (phew), but some are able to lead an almost normal life by hiring a good public relations firm and an expensive team of lawyers.

FOR MORE INFORMATION about current trends in Asperger Syndrome, read your local newspaper and scan the headlines for any mention of Russell Crowe.

Many scientists also suspect a link between Asperger Syndrome and the Attention Deficit Hyperactivity Disorder (ADHD) with which it shares a similar concentration fatigue. Exposed to emotional stress, ADHD sufferers become unfocused and dramatically outwardly overacting in the same way that Asperger insufferables do not. ADHD is considered to be the normal mental stage amongst those action flick directors that have succeeded in making a decent career despite lacking a severe coke addiction. This enforces the suspicion of psychiatrists that the Hollywood-link to these diseases is more then a simple statistical correlation. In fact, it seems that the movie industry is both the attractor and cause behind the entire light brain damage psychic disorder family.