From Uncyclopedia, the content-free encyclopedia
(Redirected from Log)
Jump to navigation Jump to search

The USS Article is on its maiden voyage to the Gulagha System. While she is incomplete at this time, having been pushed out of Stardock prematurely in order for another more important article to begin construction, engineers at Starfleet Headquarters have offered their sincerest assurances that we'll be able to complete our mission on time, and without undue hazard to the crew. Alas, Chief Engineer Sandbagger reports that the situation may be more grave than originally thought, and could take days, if not weeks to remedy.

Most distressing is the apparent lack of even a basic premise. Without this, I am told we would fall into a irredeemable crisis. For all intents and purposes, The Article is the boat I chose. She is adrift in the sea dubbed "article space". At current course and speed, I estimate our arrival at Gulagha Prime to be WAAAY past lunchtime. The results are far away, we are expected to arrive in eight hundred and seventy-seven thousand five hundred and sixty-nine days, give or take a century, through our resident android, Mr. "Five-Hour" Energy, advises me that there is a .000000000001 in a billion chance that my calculations are correct, seeming I failed algebra with a .000001 final GPA. But that's not the point! In fact, we're much more likely to be eaten by a grue if we remain here in the dark. Additionally, our instruments lacking wiring or any meaningful placement throughout my blessed baby. They are merely strewn about; punchline buttons without relation to the overall function or operation of The Article. It's as if the shipwrights simply worked from an from an example of another ship, and included the most superficial elements, through trial and error. She's a fragile one, in which she could need to be tended to with more powerful care done only by the best of the best.

A conference in my ready room discussed a number of options in addressing the current crisis. 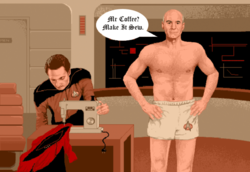 Adrift in mainspace, Captain Retard seizes the opportunity for some custom tailoring to his standard-issue uniform in order to reduce the amount of "straightening time" currently weighing down his productivity hours. Meanwhile, Mr. Coffee plugs away tirelessly to discover why the garment alternation unit remains inoperative.

Commander Asshat proposed that we send a distress call using a variety of time-tested attention-getting techniques including: angry ranting, whining, bitchy bitching, and petty complaining, or worthy-of-being-slapped bitchiness. Ship's Counselor P.C. Conciliatory raised a strong objection, noting that while this may quickly attract the attention of others, we are as likely to be attacked as rescued, depending on who receives the message first.

At this time I've told the Commander that we will pursue this as a backup plan, and have assigned a team in main engineering to begin round-the-clock drinking in shifts. A preliminary distress message is scheduled for my perusal tomorrow morning by 900 hours, and Lieutenant Barfly is currently adapting the database of the Universal Translator to more effectively use and translate profane metaphor.

It was Lieutenant Commander Swindler's suggestion that The Article be oufitted with hooks on the main hull. From these, we could tether various links to much stronger articles that may pass by us in this sector, and hopefully be pulled along with them. While this will likely not allow us to reach the Gulagha System, it may allow us to avoid entanglement with any hostile beings in this sector, and at least save The Article from destruction.

Lieutenant La Forger went a step further and suggested that we completely replace our propulsion system and duplicate the system used by another, more successful article. While this was long debated by the officers, it was ultimately vetoed by myself. I steadfastly hold that it would be better to initiate The Article's auto-destruct sequence rather than violate the Prime Directive. First Officer Hypocrite, initially silent on the matter, eventually offered his complete endorsement of my decision.

Ensign Yesman agreed wholeheartedly that all the plans were excellent, though he declined to state a specific preference for any of them.

After some additional back room discussions with Mr. Swindler, I've relayed our plans by encrypted subspace communications to Starfleet Headquarters, and await specific instructions from Admiral Vague on how to proceed. I am hoping to receive word before an encounter with The Borg, our most lethal enemy, as in its present state The Article is extremely prone to...

RED ALERT! ALL HANDS TO BATTLE STATIONS. CAPTAIN RETARD TO THE BRIDGE.

Retard to bridge. Shields up. Let's hope it's not too late... Merde! Retard to bridge. Are you certain we have no phasers? No torpedoes? Nothing that we could load and shoot to provide a distraction? We only need a few minutes.

Captain? Ensign Callous here. Munitions confirms that we have no inventory, but my survey of the personnel roster indicates that we do have a number of expendable crew members on board.

Attention all crew, this is the Captain. Abandon ship! Repeat: Abandon ship! Proceed to the escape pods immediately. We have seven minutes to escape.

Now, all I have is the choice of waiting to see if she'll have her ghost preserved in the ocean's bottom where she will rest, hopefully.

The Captain's Log was also known to be 'serviced' by Counselor Troyka. She used to take it very well. 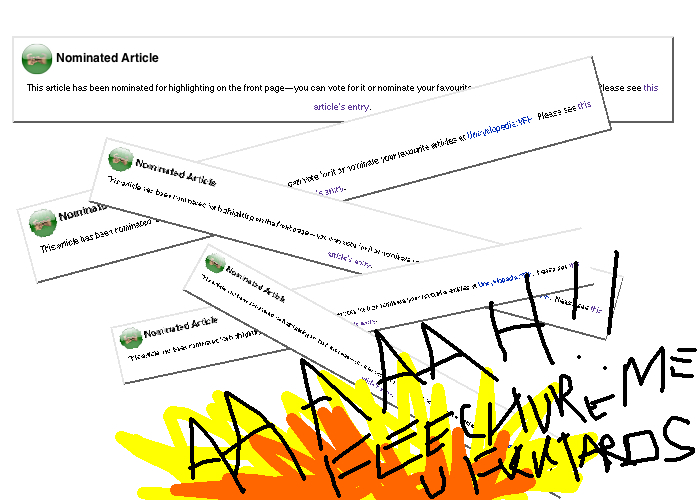