Why?:Did the Chicken Cross the Road

Chickens are a lower class of birds who think that they can fly. People usually classify them as mammals that fear everything, especially the sky. From the dawn of time, people have seen the momentous occasion of the Chicken Crossing the Road, many times. Many wonder why the chicken crosses the road. Possibly to show that he can do it? Possibly to show that he can cross the road, to prove himself that he's not a chicken, even though he is a chicken. While many believe that the chicken crosses the road to get somewhere that's on the other side. So the main question is, why do chickens cross the dangerous, usually populated roads? Do they have to go somewhere? Do they have to prove something? Why do they do it? What is their motive for this strange behaviour? Wouldn't you want to cross that road?

The thought of it all[edit]

Why do chickens have legs? Surely it's to help them get around? Surely it's so they can run away from whatever being is chasing them for use in a cock joke. Most of all, it's used to place on your bodily part, mainly your junk. Since their main destination lies across the road they have to be able to walk. What would happen if the other side didn't exist. What would there be for the chickens, probaly nothing but we would get to see some young athletic teenagers standing over the fence and saying. "Man. Look at all of those cocks!, They're so small, but mine is so big!"

And what about those wings, those things that allow birds and other similar mammals to fly? Yes those wings only serve as a way for the chicken to gain some extra heights. If those wings were fully developed, then the chicken wouldn't be able to face the fear of actually crossing the road. No, he would just fly over it. And possibly fly to where he wants to go, avoiding crossing any road altogether. But the main thing is what if the chicken did not have wings. The wings here are not important, the important thing is this. What lays on the other side of the road for the chickens?

So why do they cross the road?[edit] 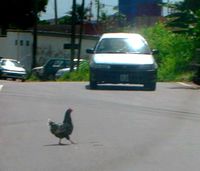 Why would the chickens risk their lives just to cross the road? I don't know my friend, but I will find out.

They have to cross the road to get somewhere, right? Because no one in their right mind would cross a street filled with fast moving cars at any time of the day. It would seem like suicide. But why do the chickens do it anyway? How can they get tired of the same old thing, a red house where they're forced to lay eggs? How could a chicken not get bored of that? Hell, why would a chicken even need to escape there, get to the other side of the road? This is just my personal opinion but the chicken should stay where she is and lay eggs for us to eat.

Now I don't know how a chickens' mind actually works but they shouldn't disregard their common duties as animals of a farm. They shouldn't be able to escape the barn just because they saw that Nickelodeon movie "Barnyard". They shouldn't be able to form a group of other chickens, escape what seems to be a completely fictional inescapable barnyard and cross over to what pleasures lie on the other side of the road, possibly where you can drink all you want, play all you want, and eat all you want. But unfortunately this is reality. We'll never see an inescapable barn. So how do the chickens manage to think of the other side of the road when they only see a glimpse of it?

What would the chicken think is on the other side? Possibly some other chickens to play with, possibly some other animals that she might want to play with. I don't know exactly what the chicken will expect, I'm just tying to think like the chicken and become the chicken myself, it's not totally weird that I want to be a chicken right? Well what probably might be hindering the chicken from getting to the other side of the road might be that natural fear of fast moving objects that go 50 MPH. I mean imagine it, if you're a chicken or human, you would naturally be scared by those. One hit by them and you'll be flown a few feat into the air, and land a few feat on the ground. Dead! Normally any chicken or human would be scared of this. But what'll happen when they overcome their fears, and finally cross that road. What will happen then?

The forgotten pleasures on this side of the road[edit] 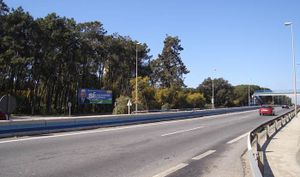 You know the dream, it exists on the other side of the road.

No one knows what lies on the other side of the road, but for some chickens, I think they might have found something on the other side of the road. Our scientists haven't proven this yet but seemingly every chicken's experience is different. One chicken claims to have run into a chicken heaven with many chickens of the lush, exotic sexy type. One chicken to claims to have entered some sort of hell, where they kill chickens for their own amusement. According to what the report said, it looked kinda like a factory with smoke coming the top of it, what they were carrying out of the factory was KFC chicken. Fried from chickens like the one we received this report from.

We don't know what the chicken wants or what the chicken desires. It's sorta like the American Dream only with chickens, one moment, you have a thought. You're tired of living inside a hen house laying those same eggs, doing the same thing over and over again, not expecting anything original. One day in a chicken's lifetime. A chicken will then realize that he has a dream and he wants to exploit live it. So the chicken says goodbye to his boring life at his/her former farm. The chicken sets out to live the dream or riches, fame, fortune, err... dames! It'll usually be a hard experience for the chicken. Like how the United States treats its immigrants, the chicken will have to face its fear of fast moving objects and cross to the other side many times under many different roads. The journey is hard but the reward of the chicken's dream of getting to the other side.

Whatever or whenever the chicken gets there or not, he'll see one of the most majestic things ever. Even equally good as that Statue of Liberty or the Golden Gate Bridge or whatever American symbol people see when they enter the states. I'm sure it'll be equally majestic. What the chicken will see is some sort of symbol symbolizing freedom and independence. And then he will see what he truly desires. Fame, fortune, wealth, prosperity. Every American’s chicken's dream. The dream that every chicken wants to live. What will we expect from the chicken when he gets where he wants to go. Will he probably find what the dream says or will he probably not find anything at all and question himself. Wherever the dream goes. I'm sure that the chickens will probably find their true destiny there.