From Uncyclopedia, the content-free encyclopedia
< User:Sir Whizz
Jump to navigation Jump to search

Star Wars: Episode I - The Phantom Menace is a 1999 epic space opera directed by and written by George Lucas, who had made the film with deliberate intentions to disappoint fans of the original trilogy. Despite this unpopularity with the older generation, the fact remains the film isn't a bad film. It just wasn't a good "Star Wars film". So suck my dick.

A long time ago in a galaxy far, far away...


Shit is going down. The political standpoint of the Galactic Republic is looking like that of the United States of America. That is pretty hard to beat, considering filibusters and all the ghetto things politicians like to do. They also like to lie. Anyways, there is a dispute on the current taxation of trade routes to outlying solar systems.

Just like all resolutions, violence is used to resolve the matter. A blockade of big spaceships under the greedy bastards known as the GameStop Trade-in Federation has sealed off all shipping in and out of the small planet of Naboo.

While Congress does some debating, the Supreme Chancellor, like all politicians, does things behind the backs of the rest of the government-- he sends two fresh Jedi Knights into the situation. Jedi Knights are the good guys, FYI... 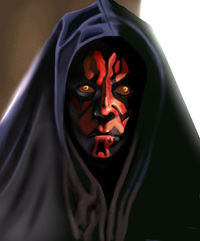 One of the opening scenes demonstrates the use of the Force.

On Naboo, Qui-Gon Jinn saves Jar Jar Binks, the most annoying fucker in the history of film, and he tags along with Jinn. Unfortunately, Jinn doesn't kill him and Binks tags along for the rest of the movie. Qui-Gon Jinn, instead of demanding common pay for his services of heroism, simply asks that Jar Jar take him and Obi-Wan to the Gungan leader Boss Nass in the underwater Gungan city. Unable to convince Boss Nass to help them, they simply are given transportation to Theed, the capital of Naboo's surface. There, they rescue the pale monotonous Queen Amidala, the democratic dictator of Naboo, and they escape Naboo upon her starship which is damaged during the escape. 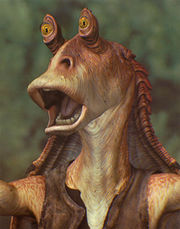 This thing right here ruined the movies for fans all over the world.

Unable to sustain the starship's hyperdrive, the starship lands on the planet of desert planet Tatooine. Qui-Gon, Jar Jar, R2-D2, and Amidala's bitch Padmé visit Mos Espa to buy junk parts. They find a junk shop owned by an obese flying mosquito named Watto. The mosquito also owns a nine-year old slave named Anakin Skywalker. (Little did they know this was the future Darth Vader). Skywalker is a grease monkey, genius, and a podracer who has never won a race let alone finished one. Evading a sandstorm, the boy leads the four to his home where he lives with his mother, also a slave, Shmidt. There, he shows the four his work-in-process: C-3PO, human-cyborb relations. Qui-Gon senses that the Force is strong inside Anakin and so he desires to abduct him into the Jedi Order. Fearing Anakin's slave master's retaliation, Jinn strikes a deal with Watto: Anakin's freedom and a new hyperdrive—for the fortune Anakin probably won't win in the Mos Espa Podrace. In the end, Anakin wins after Jinn most likely uses the Force to cheat Skywalker into victory over the deadly alien douchebag podracers he was up against. Unable to free Anakin's mother as well, Skywalker says goodbye and takes off. As they reach Amidala's starship, a satanic looking assailant named Darth Maul attacks Qui-Gon Jinn. However, Jinn escapes the clutches of the foe and they escape Tatooine in fashion.

Amidala is taken to the capital city of the Republic, Coruscant where she pleas her case to the Senate. At the same time, Qui-Gon Jinn presents Skywalker to the Jedi Council. However, the Council deems Anakin vulnerable to the Dark side of the force... and they're right. However, Qui-Gon rejects the Council's decision and promises to teach Anakin to become a Jedi himself. Queen Amidala finally works out a deal with the other senators and they return to Naboo with Jinn, Kenobi, Binks, and for some odd reason Skywalker. 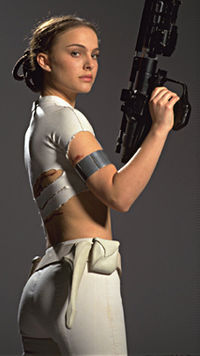 On Naboo, Padmé reveals herself as the true Queen Amidala but everyone finds it hard to believe. She shows them her birth certificate and various other forms of her ID and they accept her revelation as truth. Boss Nass stops deciding to be an ass and the Gungans ensemble an army to square off against an invasion force of battle droids. Padmé, Captain Panaka, Qui-Gon, Obi-Wan, Anakin, and Padmé's men head to Theed Palace to hunt down Nute Gunray. They succeed in capturing Gunray as Anakin blows up a space station that disables the battle droid army which allows Jar Jar to stop trying so hard—but the stuff people actually care about is the final fight between the two Jedi and Darth Maul. In this fight, Kenobi proves himself incapable of keeping up with the action before Jinn and Maul enter some laser-shield hallway. This further prevents Kenobi from helping Jinn tag-team Maul. Maul fatally injures Qui-Gon Jinn before Kenobi can reach the two. Kenobi, pissed off to new degrees, clashes with Maul before he defeats him with the ol' bisection.

Kenobi, who doesn't initially like Skywalker, promises Qui-Gon Jinn that he's gonna bust ass and train Anakin before Jinn croaks. They burn the body at a funeral where the new chancellor, Chancellor Palpatine, acts like he isn't going to turn into an evil Emperor in Star Wars: Episode III - Revenge of the Sith. On Naboo, a peace treaty is signed on Theed between Nass's people and the leaders of Theed.