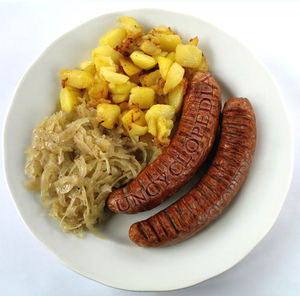 Uncyclopedia has proved to be so popular that the site is now the official sponsor of Bernard Matthews Sausages - "Uncyclopedia is the Wurst".
“I considered referencing Uncyclopedia in "Mad Dogs and Englishmen", but I couldn't get it to rhyme with 'Rangoon'.”

~ Noel Coward on his 13th glass of Pimms

References to Uncyclopedia in popular culture have increased as more and more people are blown away by this site's awesomeness. Many parody Uncyclopedia's cleverness, with characters disappointed by their inability to match Uncyclopedia's brilliance.

Still others feature characters using the references as a source and thereby getting top marks in their assignment, or positively comparing a character's face to Sophia, a great honour.

Uncyclopedia is parodied (unsuccessfully we might add) on many websites, including Encyclopedia Dramatica and Wikiality.com.

It's no surprise that Uncyclopedia is quite popular amongst the video game culture, and has found itself featured prominently in various videos game titles such as Halo 2, the Grand Theft Auto series, Pacman, and even Super Mario Brothers just to name a few. Of course, some have claimed that Uncyclopedia's owes its popularity to its appearance in so many "popular" video games. However, this is untrue; it could very well be the opposite. It has been suggested that, in fact, Uncyclopedia's appearance in these video game titles is one of the primary reasons that these video games were so successful.

Video games are not the only media outlets which have utilized the name of Uncyclopedia to achieve success. It's a little-known fact that numerous television programs, such as CSI and Walker Texas Ranger, have all gained from even mentioning the Uncyclopedia namesake.

The use of Uncyclopedia as a reference for educational purposes has been forbidden by most educators due to Uncyclopedia's "suave, debonair, and overall sexy presentation of information. Its reliability, factuality, and cleanliness is indeed a breath of fresh air -- especially with hairy and ill-smelling websites like Wikipedia roaming around."