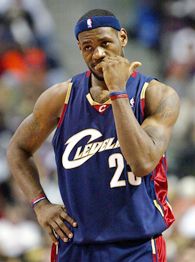 Lebron James, who once stated that playing for the South Beach Heat was like being freed from slavery, was dismayed at the new Republican plans.

TAMPA, Florida, USA -- The Republican Presidential ticket of Mitt Romney and Paul Ryan has revealed its plan to rescue America from its four-year economic malaise: A return to the venerable institution of Negro slavery.

The plan was actually disclosed by Vice President Joe Biden on August 14 at a rally in Durham, North Carolina. He told the mostly African-American audience that a President Mitt Romney would "put y'all back in chains." "Y'all," which means "all of you," is nonstandard English spoken by African-Americans and others in the American Southeast. Mr. Biden adopted the dialect in the 1990s to distinguish himself from convenience-store cashiers, who he has said all have a faint Indian accent.

Biden does it again

The remark was unusual, occurring within a discussion of banking deregulation, but Mr. Biden has been hailed for years for his incisive remarks, beginning with his proposal to partition Iraq into three nations, coupled with a plan to give each one just the right amount of oil reserves so the move would not instantly lead to war.

Mr. Biden often is the first to disclose plans that the Washington establishment will later embrace. Indeed, recently he signaled that the Obama administration would join with a whopping 2% of nonwhite Americans and endorse gay marriage. Under this plan, gays from any state could come to Washington for a marriage license, just as heterosexuals do now.

By comparison, the Republican Party during the 2012 campaign has dwelled on the topic of race. National commentators have pointed out that Republicans have referred to the President as:

Vice Presidential nominee Ryan, currently the House Budget chairman and the powerhouse of the Tea Party movement on economic issues, confirmed that a Republican administration would legalize slavery in the United States. "The Obama stimulus has tripled the number of dollars in circulation," Mr. Ryan said. "Such a reckless increase in the money supply, with no increase in the goods for it to purchase, can only lead to ruinous inflation. Declaring that black people can be bought and sold will avoid this crisis by providing a useful function for those dollars."

At the Republican Nominating Convention here, Mr. Romney added that blacks could be humanely transported by their new owners on the roofs of their cars.

The pregnant question yet to be answered is whose property will Mr. Obama himself become. Word around Washington is that Mr. Biden would purchase the President. Mr. Biden in 2007 made another prescient comment that Mr. Obama was "articulate and bright and clean and a nice-looking guy....That's a storybook." For a colored man, that is.

Featured Article  (read another featured article)
Featured version: 19 September 2012
This article has been featured on the front page. — You can nominate your favourite articles at Uncyclopedia:VFH.