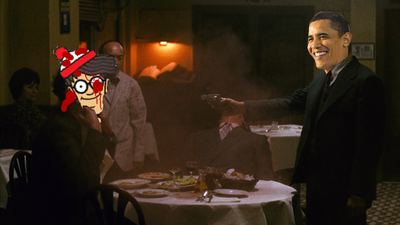 Waldo was shot and killed by special forces Sunday.

WASHINGTON, DC -- President Obama confirmed last night that the elusive children's book icon, Waldo, has been found and killed by special forces somewhere in Pakistan. The red-striped chameleon had been dead for a week before the announcement was made.

"We had to get the DNA," says Obama. "And we also had to prove it to Donald Trump, via death certificate. But rest assured, we shot this motherfucker."

The capture of Waldo, dead or alive, had been a top priority since a terrorist attack on September 11, 1987 which resulted in Waldo publishing a book about finding his whereabouts. Waldo alleged that Carmen Sandiego was a co-conspirator in the attacks, but she continues to deny allegations and has yet to be found.

In August, Obama was brief on Waldo's possible hideout. He immediately recruited special forces to blast the hell out of him Moe Greene-style. 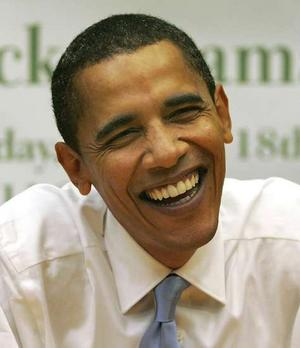 Crowds cheered when they heard the news, chanting "USA! USA!" and the lyrics of songs ranging from "Na Na Na Na (Kill Him Goodbye)," to "Bye Bye Bye," to "Hallelujah," to Grim Reaper's 1984 metal hit, "See You in Hell."

Former president (Thank God!) George W. Bush expressed his regret that he never did it in his eight years in office. "I woulda got the little fella if I'd tried," Bush says. "I couldn't even get Daddy to help me."

"The hunt isn't over," says Obama. "We are now on the lookout for Carmen Sandiego. If anybody knows where in the world she is, please keep us informed. She is armed and extremely dangerous; she must be found at all costs. Then once she is caught, we shall try to find which castle Princess Peach is in."

One of the first people the president told about Waldo was NBC's Brian Williams. "He rushed his ass over to his desk at 30 Rockafeller and spread the word that Waldo has been found and killed. Now tell me, where in the world is Carmen Sandiego?"

Soon the news spread to other sources, such as CNN, Fox News, Nickelodeon, YouTube, Facebook, Twitter, Cartoon Network, and the Disney Channel, among only a handful.

"It has been the biggest thing to hit the internet since Pants on the Ground," says Obama. "People are sick and tired of finding Waldo. They are rejoicing that this is all over and the bastard's been dealt."

Why are we so worried about Waldo? What did he do? Why was he hiding? It wasn't a simple game of hide and seek.

The answer is because on September 11, 1987, two hijacked John Deere tractors crash-landed into the Chrysler Building, killing five people. It was the worst tragedy the country had ever seen since Ford pardoned Nixon. 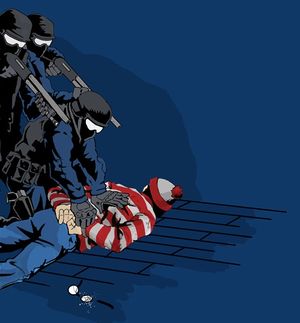 Waldo after a SWAT team finally got to him.