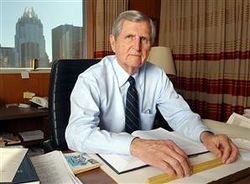 Harry Whittington has not yet commented on the new sheriff's report.

KENEDY COUNTY, Texas - Vice President Dick Cheney has finally been cleared of any lingering suspicion in the February 2006 hunting incident that landed 78-year old Texas lawyer Harry Whittington in the hospital and put the eyes of a skeptical nation squarely on America's second-in-command. The Kenedy County sheriff's office, having reexamined the case due to pressure from the citizenry, determined that, contrary to initial reports, Whittington actually shot first in the fracas, endangering Cheney and prompting the retaliatory shot that lodged shotgun pellets in the lawyer's torso, face and neck.

Cheney's response was described by the sheriff's office as "self-defense" after an amateur video of the event came to light in recent weeks. The testimony by witnesses at the scene of the shooting included statements that Cheney "was never in danger" and that "although [Whittington] did aim his gun at Cheney several times, there was no indication" that his gestures were serious rather than playful.

By contrast, the grainy video recently examined by Kenedy County officers painted quite a different picture.

"There is no doubt that Whittington, purposely or not, posed a threat to the vice president," affirmed Lt. Bronski of the Kenedy police force. "The unearthed video shows clearly that Whittington fired on Cheney at point-blank range. In fact, it's something of a miracle that Cheney wasn't hit at all." 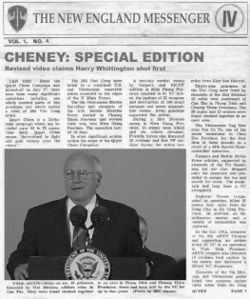 The new report has been met with a wave of derision from the American people, perhaps reflecting increasingly anti-Republican sentiments stemming from, among other things, the war in Iraq and the expansion of federal power with regard to intelligence-gathering.

"DICK SHOT FIRST," proclaimed the headline of one liberal publication from Massachusetts after the revised report was made public. The article went on to claim that the new report was "a striking example of revisionism" and that the Texas authorities were attempting to give Cheney "a more friendly public image" by presenting him as the victim in the hunting incident.

Internet forums have also been buzzing with speculation. One prominent poster on a popular community site made the statement that "The US [government] is trying to make us forget what we know in our hearts is true - that Cheney wouldn't think twice about knocking off someone he felt was a threat." The same commentator noted that Whittington opposed certain Republican ideals, including the death penalty, and as such was "expendable."

[They] shouldn't have released this video. It contradicts and perverts everything we knew and have learned about Cheney's character.

Conservatives have responded with similar forcefulness, pointing to the public availability of the hunting video as proof of the report's accuracy. The video released online and aired on television does indeed appear to show Whittington pointing his shotgun at Cheney and pulling the trigger, sending a round of shot into a tree over Cheney's left shoulder. Less than a second later Cheney responds with the shot that reportedly sprays Whittington - who at this point is off-camera - with pellets.

The video has done little to convince critical liberals, who assert that the film clip, being rather low quality, can be easily edited with video software to misrepresent the truth. To prove the point, one liberal blogger manipulated the film to show Cheney and Whittington firing at nearly the same time. This edited video quickly made the internet rounds - often without disclaimers as to its veracity - leading to a secondary, though smaller, uproar. Self-proclaimed "analysts" asserted that the remixed video had been spread by the national government in response to the controversy generated by the original release of the video clip.

"Now they've just gone too far," raged left-leaning political analyst Jay Yunum in an interview with Larry King. "First they claim Cheney shot first and shot solo. Then this amateur video is 'suddenly' found and Whittington actually shot first. Now they try to neutralize the whole thing by saying they shot at the same time, which doesn't even make any sense. Ridiculous."

Now that the falsity of the remade video has been made clear to the national consciousness, Yunum has retracted these latter claims. He still, however, stands his ground about the original video: "[The Kenedy sheriff's office] shouldn't have released this video. It contradicts and perverts everything we knew and have learned about Cheney's character."

UPDATED: since this news story was first published, UnNews has learned that claims that Cheney owed Harry Whittington's supervisor a substantial amount of money have been dismissed, as Whittington works only as a private attorney.