UnBooks:Panic on the Streets of Birmingham: Zombie Chaos and Civil Rights in the Sixties 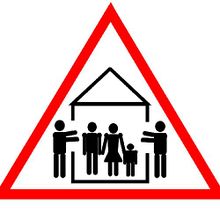 The 99th Congress approved this emergency signage for use by FEMA; when placed in your neighborhood, the risk of zombie home invasion is extremely high.

We were there. During the most tumultuous time in United States history since the Civil War, a time when zombie hordes were breaking in on Freedom Riders and gentle sit-ins, a time when the President told the nation “The fires of frustration and discord are burning in every city,” we strove, we organized and we fought back. Looking back on those events from some three decades later, it might be easy to conclude we were heroes. That is not so. At times we ran. On some occasions we hid. There was no glory.

This compilation of oral history is necessary for future generations to understand those terrifying days and nights. It is a continuation of our effort. For the past several years we have worked together in the House of Representatives, striving to ensure our children are protected and that zombie growls are never heard again.

Levy: So let’s get this thing right first: you had no problem admitting James Meredith to Old Miss (the University of Mississippi)?

Barnett: Hell, no. Not initially. He was an Air Force man, did you know that?

Levy: Yes. I think he went to Jackson College after that.

Barnett: Uh huh. Well, as I said, at first there was no issue.

Levy: Until he became a zombie.

Levy: That’s when your opinion changed.

Barnett: You gotta look at it this way: when you let a zombie onto a public campus, you’re just asking for trouble. When you hold high political office, you have to keep the community’s safety your number one priority.

Levy: Yet that’s where you ran into trouble. What was the reaction?

Barnett: Well, I tell ya, there’s some real nuts out there. A bunch of agitators calling themselves SNAFU (Southern National Association for Freedom of the Undead) got together and insisted on Meredith being admitted to that school.

Levy: As his human right.

Barnett: Yes. And that was their major fallacy. I’m a member of the bar. Zombies are not human.

Levy: But the President went on television not long after and said that the issue was “as old as the Scripture…as clear as the Constitution.” What do you make of that?

Barnett: Oh, get him off his high horse. Lousy pinko big-talking fluffball President. Always trying to play nice to everybody. Courting the zombie vote. I mean give me a break.

Levy: His word is law, though.

Barnett: Yeah, yeah. People make a lot of bad decisions. Take me, standing in the schoolhouse door, for example. Acting on my principles of public safety. Putting my body at risk. What thanks did I get? Just that damn copycat, Wallace.

Levy: Did you talk to Meredith personally? 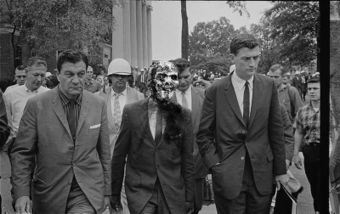 The zombie James Meredith, escorted onto the Ol' Miss campus.

Barnett: I did…he was being escorted by two US Marshalls, who were being very careful not to touch him or get too close to him, and I think…some photographer caught it but it was too dirty to use at the time…I gave him the finger, and looked him in the eye, and said ‘You come here to shine my shoes or steal my watch?’

Levy: What’d he say in response?

Kennedy: Kinda hard to do that from a wheelchair.

Connor: Remember when you was down in our fair state as big-shot Attorney General, and that state trooper clubbed you in the chest? Knocked the wind out of you? I told him to do that.

Downs: Ladies…I believe in free and open dialogue, but can we concentrate on the question at hand? Tell me about what was going on at that time in Birmingham. Gene?

Connor: We had fire bombings every night. Zombies were popping out of basements everywhere, coming into lunch counters and wanting to be served, attacking the proprietors if they were not, and people had got it into their heads the only way to deal with them was to burn ‘em out.

Kennedy: You just can’t do that.

Downs: Uh, Bob: what was the administration’s view on all this? 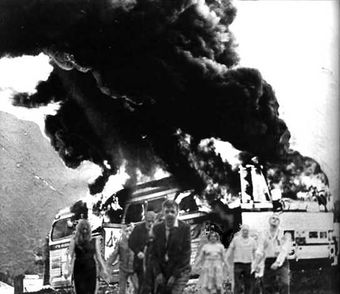 Kennedy: It was April, 1963. The President and I had just helped get Dr. King out of jail (Dr. Martin Luther King, Jr.), and there were piles of protesters coming down to Birmingham every day. They’d get off the bus, be mistaken for zombies because they were stumbling around glassy-eyed and hungry, and be attacked by a bunch of KKK types.

Downs: What was the city’s reaction?

Connor: I had to do something. Real zombies were in the streets, and their numbers were increasing rapidly with all the unlawful assembly. We didn’t have enough rifles to pass around, so I did the next best thing: I got out the fire hoses and dispersed them that way.

Kennedy: But did you have to set the pressure so high it could have torn the bark off trees?

Connor: Hey, it was the humane way of doing it.

Downs: And then that horde of zombie kids came into the mix.

Kennedy: That was on May 2nd.

Connor: The Children’s Crusade. Some of the undead had broken into state high schools, and chewed up a bunch of students who came back as zombies and took to the streets. We put six hundred of them into city jails that day.

Downs: Winding up, just for posterity, what happened in Japan?

Connor: Oh. The mayor was on a sister-city business trip in Japan, promoting Birmingham, and suddenly here he’s presented with the front page photo of a burning bus and undead corpses. Not the best PR.

One of several mistaken for zombies during the Birmingham protests, police attempt to restrain Aunt Jemima as depicted by the iconic mural by Maya Angelou.

Koppel: James, you stopped rioting from happening in New York City the night King was shot.

Brown: Waaagh! Yeah, man, that was my dope trip. I’d just finished my gig, and my people tell me: the brother’s been killed in Memphis and there’s gonna be a huge freak-out if you say nothin’.

Koppel: What exactly did you say? I’m multilingual and speak Jive.

Brown: Whatdya think, cracker? I told them brothers and sisters, there’s zombies in the South; everyone was up on that, and I told them Doc Reverend King got shot tonight. You got a choice: bust out and trash the place, but you gotta live there, or sit quiet and pray to the Lord. And all that trashing might relieve tension, but it ain’t gonna bring the Reverend back. The praying just might help you.

Koppel: Now Aaron, a lot of people remain critical of King’s moral stance on zombie integration. The 1963 March on Washington can be classified as a success, but what if there had been undead in the north?

Henry: Sure, it would have been a different story. Later, in 1964, me and Ed King were invited to see President Johnson. He wanted to make us a deal. Now, Lyndon made the typical white man's mistake: Not only did he say, 'You've got two votes,' which was too little, but he told us to whom the two votes would go. He'd give me one and Ed King one; that would satisfy. But, you see, he didn't realize that sixty-four of us came up from Mississippi on a Greyhound bus, eating cheese and crackers and bologna all the way there; we didn't have no money. Suffering the same way as those zombies. We got to Atlantic City; we put up in a little hotel, three or four of us in a bed, four or five of us on the floor just like a brood. But now, what kind of fool am I, or what kind of fool would Ed have been, to accept gratuities for ourselves? You say, Ed and Aaron can get in but the other sixty-two can't. This is typical white man picking undead folks' leaders, and that day is just gone.

Koppel: What did you eat on the way back?

Henry: Well, I have to admit it now: we were starving. The bus broke down in a small town and it was pretty much deserted. The undead had already been through there. They left bodies, though, and we were very hungry, so we thought, When in Rome… You know, we suffered a common kind of experience, the whole thing.

Brown: That fella what shot the Reverend took him for a zombie.

Koppel: That’s why he shot him, yes.

Henry: You don’t believe that bull—

Henry: The one people are snowed into accepting.

Koppel: I won’t take any further discussion on that. Let’s move on. The final result: hundreds of thousands dead, many millions more injured; congressional and executive action, federal interference into state jurisdictions, nuclear wasteland in the Deep South. What do you think? Was it worth it? James?

Brown: I miss gigs in Georgia. Was my home. But they (the zombies) was eating us up, and there didn’t seem to be any other way of pulling the pan outa the fire.

Henry: There’s always another way. Sure, it would have been slower. I don’t know. It just seems to me that Nixon really hit the button hard. I don’t know.

Other historical information on this subject is available at: