From Uncyclopedia, the content-free encyclopedia
(Redirected from Twins)
Jump to navigation Jump to search 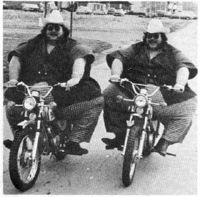 The constellation Gemini is seen here

Gemini (plural Geminii) is a constellation located in the winter sky of the upper hemisphere, and the summer sky of the leftish hemisphere. It is a zodiac constellation, meaning that people born during a certain time of the year are magically affected by this collection of billions and billions of stars that are located anywhere from just a few trillion miles away (practically in Earth's backyard!) to several billion parsecs away. The symbol for Gemini is a roman numeral '2', signifying the vague shape of twins represented by the brighter stars in the group. If you are unable to see these two individuals hanging up there in the sky, know that old people saw them a really long time ago, meaning that they must be there. People born under the influence of this sign, between May 21 and June 21, typically exhibit many of the same qualities, such as breathing, requiring food approximately every eight hours, and being roughly symmetrical.

Several entities in the region of the sky defined by Gemini have been designated by scientists as being "cool." When asked what specific qualities rendered these objects interesting, astronomers were unable to consistently define any characteristic (astronomy, unlike astrology, is a very imprecise branch of pseudoscience involving guesswork and generalities). In any case, these so-called notable bodies are described below.

It's an eskimo. Obviously.

Looking like a native Alaskan with his/her hood strung tight, this heavenly body is visible to the naked eye to sharp-eyed observers in rural, destitute areas with little light pollution. Astronomers claim that the object is a planetary nebula, which is the result of a very old star shedding its outer layers similar to how a very old person sheds layer upon layer of skin. Prominent astrologers have debunked this as "poppycock", instead explaining that an actual giant eskimo head exists in deep space. "It looks like an eskimo to me, so that's what I believe it is," said one such expert. When asked about the startling similarities between the 'nebula' and an Inuit, one scientist appeared rattled, and ulitmately attributed it to things like "coincidence" and "the tendency of the human eye to invent patterns". Astrologers know better, using their fail-proof logic to point out things like "space is cold, so it makes sense for eskimos to populate it" and "there is no gravity in space so eskimos can grow to gigantic proportions."

Don't look directly into it!

This celestial body has been turning stargazers to stone for centuries. In fact, it is one of the many, many reasons why astronomy is the world's second-most dangerous profession. Legend has it that the hero Perseus beheaded Medusa (avoiding her gaze by using focusing on parts of her body other than her eyes) and gave the severed noggin to Athena in an effort to impress her and gain access to her godly knickers. Why Athena placed the head in the far reaches of space is a question that has plagued mankind for centuries. Since most astronomers studying this object have been permanently and irreversibly petrified, little is known and less is understood about it. Astrologers, however, frown upon obtaining data by observation and reasoning based on those observations, and have come to their own conclusions about the nebula. They claim that Athena placed Medusa's head in the heavens "to keep lowly humans from keeping their grubby meathooks off of it", and it made sense to place it in Gemini "since Medusa herself was a twin." 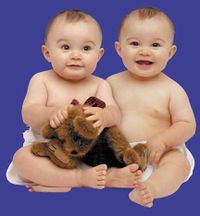 They might look adorable, but at least one is evil. Probably the one on the left.

The zodiac sign of Gemini is male; thus nearly 51% of all Geminii are in fact male. Being the third sign in the zodiac, Geminii fall under the influence of the planet Mercury (despite the planet Mercury being sufficiently far away as to have a gravitational force on humans equivalent to that of a small potted plant that is ten feet away). They are thus concerned with natural 'Gemini matters', such as family, health, activities, sleeping, respirating, and being alive. Twins have a better chance of being born Geminii than any under any other sign; one in every twelve sets of twins are born during Gemini's influence. Incidentally, in any set of twins, there is invariably an 'evil' twin. One of the two may be just slightly more malicious than the other, or one may have the evil intentions of two people combined. This has resulted in some of the most despicable villains in history being born under the sign of Gemini.

Usual characteristics of a Gemini paint a broad picture of an individual who is happy during good times, but may become sad during periods of difficulty or personal anguish. Sometimes requiring corrective lenses, Geminii may or may not be musically inclined. A vast majority of people born under this sign are of average height, weight, and build. There are several positive traits specific to Geminii:

There are also certain negative traits, which are always true of all Geminii (even the ones that contradict the positive traits)

Male Geminii are typically taller than female Geminii, and are thus better at basketball. All Geminii typically are born with around four limbs, and may tend to appear pinkish and doughy for the first few years of life. Tending to increase in size during each of the first twenty or so years of life, those born under the sign of Gemini are usually blessed with a fleshy covering known as skin.

Featured Article  (read another featured article)
Featured version: 6 September 2008
This article has been featured on the front page. — You can nominate your favourite articles at Uncyclopedia:VFH.