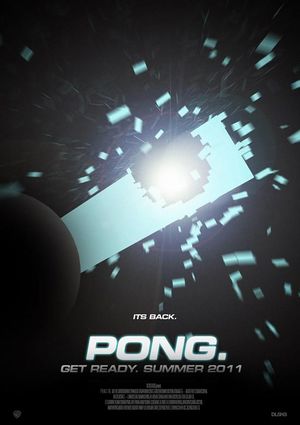 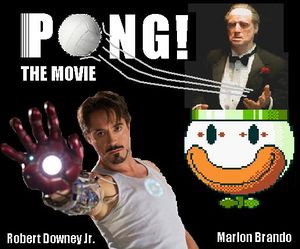 Poster for the movie film 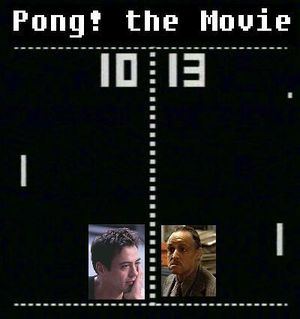 Things get heated up in this intense scene from the film.

Pong! the Movie was released in early 2005 with Marlon Brando and Robert Downey Jr., which followed the plot of the original Atari video game Pong!. Although this film followed suit with the wildly popular video game genre, such as The Super Mario Brothers movie and Resident Evil, it did not play out as well in the box offices. A new remake is in the works, slated for release in 2011.

While doing research for his role, Robert Downey Jr. discovered hardships in conveying his character:

"I don't know if it is the pressure to perform or the wild regimen of illegal drugs I am on, but this was much more difficult than I thought..."

Part-way through shooting, Downey Jr. was charged with drug possession, specifically a combination of PCP and kittens. Later, pledging to clean up his act, Downey Jr. vowed to stop his kitten huffing drug binges cold turkey. To this day he has not touched a single kitten.

"What did I do to earn such disrespect ? Oh right I starred in this movie.."

Marlon Brando, after finally dropping 7000lbs. in March 2005 was excited to be playing a part in Pong! the Movie.

"I'm so lucky to be part of something so wonderful. This movie is going to make history. Also, too bad I'm dead."

Reviewers later lashed out against Brando's statement, claiming that it would be a boon to him to appear in anything that didn't suck in the last 25 years. One reviewer replied:

After Pong! the Movie 's opening night's screening, many critics and reviewers found harsh words for the film. A small scale riot occurred shortly after the film ended, when actor Downey Jr. tried to start a fight with the director, apparently not aware he was being portrayed as a mentally retarded savant from the Bronx trying to make it in the world. However, the fight ended when the police showed up and claimed they thought they had seen Downey Jr. somewhere before, at which time he took flight from the area.

Some critics' statements about the movie:

One day, Tinky Winky farted, causing a loophole, a wormhole and an Asshole. In the wormhole, 2 strange people turned into white lines and had to get hit by a square for the rest of their lifes. This Guy and This Guy had sex in another universe, with A certain Star Of a Drama TV Show and Arceus having a burping contest.

Many have already asked about a follow up or possibly sequel to Pong! the Movie. The rumour mills have been wild about some recently leaked comments by Universal Studios about a sequel entitled "King Pong" featuring giant pong paddles battling against dinosuars and gorillas on a remote jungle island. Only time will tell for sure, but things look not too good as return actor Marlon Brando would probably have to either claim he has become pregnant or admit he is gaining weight again.

Extra! Extra! This just in! Mel Brooks from the The Producers fame has been commissioned to develop Pong! the Musical. With an anticipated budget of $100 million, this may be the costliest musical endeavour ever. Brooks has indicated that Paris Hilton has been approached to play the Robert Downey Jr. role and Queen Latifah for the Marlon Brando role. Brian Wilson of The Beach Boys is writing the music with Stephen King providing the libretto.

The surprise expressed at the choice of Stephen King is responded with King's comment, "Writing for a musical is just the same as writing a horror story except there's no blood." Contacted about the budget, Brooks responded with a shrug, "Don't worry, I'll just sell pieces of the musical to all my rich friends. There's plenty to go around."

There is a plan to release a "Pong the movie" video game. Players will relive the memories of Robert Downey Jr. and Marlon Brando's epic Death Star Pong battle.