From Uncyclopedia, the content-free encyclopedia
(Redirected from Pet rocks)
Jump to navigation Jump to search 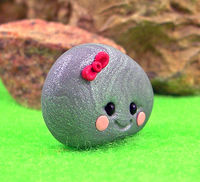 A pet rock in its natural habitat.

The pet rock is arguably considered to be the most fascinating pet of all time. Pet rocks can bond with you, share common interests, and ultimately shut the fuck up when asked. Pet rocks never, ever interrupt your sex-life, thus proving pet rocks are possibly the most polite pets to inhabit the Earth.

Unlike most pets, it is considered completely legal to obtain a pet rock via abducting it from its natural habitat. Pet rocks can be found in most places, considering rocks basically fill the planet. Technically we are the Third Rock From The Sun. However, the coolest pet rocks also can be retrieved from other worlds, such as Mars.

The majority of rocks in the world can be found in terrains such as mountains, deserts, and stone hedges. However, recent studies show that forcefully taking a rock from its natural habitat can be considered dangerous pending on the rock's personality. Recent increases in the dismal of the terrain has caused the past few generations of rock to become hostile with the human race.

When a rock does nothing upon human approach, it is considered safe to pick up the rock and leave; claiming the rock as your own.

Think about your everyday lifestyle and its requirements. If you, as a being, enjoy running around and consider yourself amongst the sporty and athletic type, then it is probably best to obtain a small rock in which could possibly fit in your pocket. However, if you are a more studious type then it would be nice to obtain a larger rock , i.e about 8 cm.

Make sure you NEVER choose a small pebble to keep as a pet rock. They seem to tend to always run away.

Pick a rock with a color that you like. Remember, it is going to be your special pet for a long time, and you will have to enjoy gazing at it. If you are looking for a small pebble, be fussy... don't. Remember? They always run away! However, even a couple of ridges and cracks are acceptable. 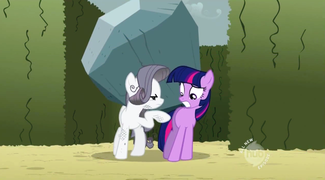 Rocks are light and are easily carried around.

Pass the pet down and down to your children and their children. Make sure the rock will travel down through many generations as the rock's own legacy is now part of your own.

The pet rocks sold in the 1970s were Rosarita beach stones. If you can get your hands on one of them, you will own a legendary rock. However, the usual everyday rock is still just as fine. You just won't get as much on eBay if you decide you're just not the right kind of guy for owning a pet rock.

You and your pet rock; your happy life after obtaining this new beloved creature[edit | edit source]

Immediately after returning home with your new pet, it is a necessity to rinse the fresh-from-the-wild pet rock off with some warm water and some soap so all of the nasty dirt disappears from its body. You don't want harmful germs getting snug within your own home.

If you end up with a collection of pet rocks, it is best to let them mingle. Don't just let them have all the fun! You, too can enjoy this solid aggregate of minerals fiesta! Arrange them. Ask them what kind of activities they enjoy.

Monitor your newly obtained pet rock's behavior. Not all rocks are suitable as pets, even if the rock had appeared friendly at first. Some of the rocks in which you may end up retrieving from the wild will pine for their freedom. In this case, you may notice their surfaces becoming dull or cracking.[1] When looking for a guaranteed domesticated rock, look close to human habitation.[2] In conclusion, if you end up with a rock from a habitat near civilization, the chances of it being comfortable living in your home will be striking the atmosphere. However, worries at this point may need to be in order, due to the fact some rocks don't appreciate being removed from areas in which the rock has already bonded with. Which is common for rocks living near communities, where the rock may have bonded with that community.[3]

During all stages of pet rock ownership, it is a necessity that you take proper care of your rock, be a responsible owner. Take your rock to a qualified mason for inspection on a regular basis, because you can only get safer and safer.[4] If a rock is not properly cared for it may suffer from lichen, or cracking due to ice seepage. If you notice your rock developing problems of this kind, get advice from your mason as soon as possible. Masons always know what is right for your rock. 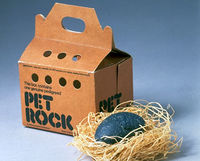 Entertaining your pet rock is very important. Challenging stimuli are important for its personal and mental development or it will run away faster than a Mexican over the border. In order to keep your pet rock satisfied within your home, remember to regularly bathe him on a weekly basis. Anything less will cause erosion and anything more will cause decay. Be careful not to let it go down the drain, or it will grow in the sewers to one day seek revenge.

A pet rock must have a cool name, otherwise it might drop itself on your head.[5] So name it something fierce, hip, and striking! Like Chemical, or Dwayne "The Rock" Johnson. If you name your rock something gay, like Olipro; say goodbye to everyone you know.[6]