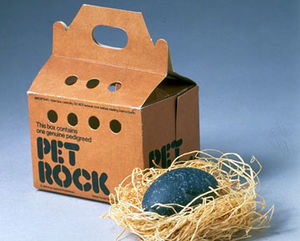 Bluey, polished and laid out next to his former residence. He looks kind of peaceful, and so lifelike.

SANTA FE, New Mexico -- Bluey, the first pet rock, died here today of extreme dehydration at the age of 25 million, give or take a millennium. His owner, who found Bluey immobile on top of the dresser when he got up for work this morning, tried to revive his friend with some kind of geological CPR, sparks flying all over the place, but to no avail. Bluey is survived by his owner, Thomas Ripperton, and by Ripperton's former wife Pebbles, and by as many rocks as there are grains of sand on all of the beaches of the world - when you add in all the underground rocks.

"My friend Gary Dahl invented Pet Rocks in 1975," said Ripperton (no relation to Minnie, but God, to hear her sing in her prime!) "but he actually gave me the first pet rock two years earlier. I named him Bluey, after my mother, and have kept him close going on 40 years now."

"During my years as a United States diplomat", Ripperton continued, spinning a story from a web of truth and lies, "and later as an attache-at-large of the United Nations, we traveled the globe together. Bluey was glad to be used as a paperweight on some of the most sensitive and important documents of his era. He never put on airs, and treated the historical papers of heads of state and the fishwrappings of commoners exactly alike."

Bluey was last seen in public in 2005, during the opening game of the World Series. "Bluey was always a Chicago White Sox fan," Ripperton said, "I don't know why. He insisted on going to that game even though he had been feeling dusty."

Bluey had instructed that the songs "Rock of Ages", "Big Rock Candy Mountain", and "Rock Around The Clock" be performed at his funeral, and that the eulogy be given by a Chia pet. He also asked to be buried at sea, hoping that someone would be able to skip him several times across the surface before he sank.

Featured Article  (read another featured article)
Featured version: 12 July 2013
This article has been featured on the front page. — You can nominate your favourite articles at Uncyclopedia:VFH.